“What we're gonna do right here is go back, way back, back into time.” — Troglodyte, the Jimmy Castor Bunch


The year was 2002. As part of the screening committee of the Houston Gay & Lesbian Political Caucus, we screened our candidates for the upcoming November elections on the top issues: the Employment Non Discrimination Act (ENDA), the Hate Crimes Prevention Act, candidates’ stance on equal benefits and rights for Domestic Partners (or civil unions), and the most recent hot topic the Permanent Partners Immigration Act (PPIA)…. Oh, and also we gauged candidates’ sentiments on gender identity inclusion in all of the above. 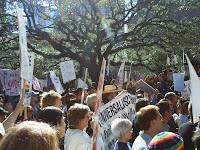 Yes, marriage was missing from the screening. No, it wasn’t an oversight on our screening committee’s part. For the record, in 2002 the only place we were hearing anything about gay marriage were from religiopolitical zealots in Maine using the topic as reason for keeping a statewide non discrimination from passing. From the GLBT world, there was zero about marriage six long years ago, with the big battle being against the perennial harpies (transgender activists) about the flimsy justification for keeping gender identity out of federal hate crimes and employment bills.

A lot has changed in the last five and a half years. Marriage had it’s first victory in 2003 in a Massachusetts court, and the juggernaut launched into hyperspace shortly thereafter.

It was initially odd watching this from a transgender perspective. Our very first victories in marriage were mostly due to no action on our part. They came in the 1960’s in places like Illinois and Louisiana and from unusual sources – not progressive democrats, but Republicans who wrote and sponsored the legislation. In many states, trans people were getting married even without legislation, but we never created a legislative push backed by any organizational structure. The cost for court cases or even organizations was expensive (money in trans circles is in short supply) and no one wished to personally jeopardize their marriage with a challenge when they could simply get it and go on with their lives.

Most trans people worried about finding work or some way to keep from being homeless and penniless, marriage was further down the list.

So to watch this first court victory in Massachusetts in 2003 spread this viral movement replete with widespread statewide organizations, staff, and marketing budgets virtually overnight, was mindbending. 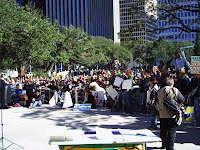 More incredible was watching how this non-issue a year earlier became the sudden impact and an overnight cause celebre with major GL-led organizations, who’d always been stodgy on the issue of things like expanding employment or hate crimes legislation. Groups like HRC who had long admonished the trans community to be “patient,” the need for “education” and communicated trans activists’ “naivete” and lack of “political maturity.”

On election night 2008, I was in Dayton, Ohio celebrating. The Obama victory was a watershed. My thoughts weren’t even taking note of what was happening with California’s Proposition 8 as I’d heard nothing but positive marketing coming out of there. Same-sex marriage advocates were winning the game in fundraising, in raising awareness, even bringing on quite a bit of star power to advocate on their behalf.

Furthermore, it’s California! It seemed a no-brainer victory. Living in Texas meant that whatever they did out there would do nothing to undo the vote that put marriage between “one man and one woman” in the Texas Constitution a few years back. With zero plans to move to (much less afford living in) California, I had nothing to look forward to on that. Our Texas federal races were depressing enough news.

It took a couple days before I made it back home from our bus trip before I realized Prop 8 passed. That was stunning.

Track back to February of 2004: at a meeting of the Transgender Community leadership, Lisa Mottet of NGLTF posited that the newly forged marriage movement would be the entire GLBT community rights movement’s savior. Once marriage rights passed, she declared, “all other rights would be passed, easily.” We had to win marriage first, then we would see passage of things like fully inclusive Hate Crimes and Employment Non Discrimination Acts enacted shortly after.

Both Shannon Minter and myself quickly protested that at that meeting. Shannon was concerned over upsetting the balance of what had already been accomplished in the courts (vis a vis Kantaras v. Kantaras), and I questioned whether this wasn’t putting the cart before the horse, rather than approaching things (as HRC personified by Elizabeth Birch had cautioned) in proper time, attaining what victories were possible rather than trying to force through even the unpalatable right off the bat. In other words, “education” … especially considering that marriage hadn’t even been in the realistic lexicon of the gay and lesbian community for the past year, much less straight society and the faith community’s. 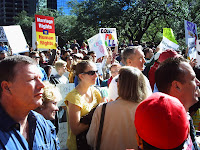 Nevertheless undeterred, the gay and lesbian community pushed forward with the marriage movement. We lost twelve states that election cycle in passing legislation against same-sex marriage, including at least two states – Kentucky and Michigan – where trans people used to legally marry.

Today, with the 2008 elections behind us, we are 29 states down, one state (recently two with Connecticut) victorious. Same-sex marriage is now 2-29. This will be our panacea? This will give us hope for our future? It’s certainly better than zero to 31. But then it was also better when employment was the top issue as well and things were actively moving, rather than being relegated to a side-stage issue with only passing concern.

Flash back two years before the Summer of Love – 1967, when Loving v. Virginia was decided in the Supreme Court. The laws banning miscegenation in individual states (while legal elsewhere) were struck down as violating individual’s choice (as well as perpetuating racism and a white-supremacist structure). Many in the modern marriage movement are pointing to that as basis for challenging same-sex marriage bans. On employment, it must be noted, discrimination in Virginia based upon race became illegal in 1964. Is this putting the “cart before the horse”?


So this past Saturday, I attended the Prop 8 rally on Houston’s City Hall steps, a little ambivalent about all of this – something a number of my trans friends also communicated. Indeed I disliked what passed in California as it affected our own as well as the gay community. But was California with us when Texas was going beyond our state laws to enter it into our Constitution? Indeed the numbers in the protests in California and in solidarity across the nation have been impressive, not to mention the amounts raised in funds to help fight the right. Yet in the back of my mind I was thinking about transgenders being left behind even in something as simple as hate crime protections in many states such as Texas, and the complete lack of attention to trans protections or activists’ efforts. 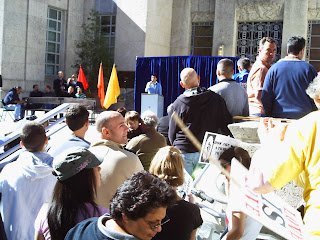 The speeches during the rally were stirring. Our local activist emeritus, Ray Hill, was on stage again with what was an inspiring exhortation based upon his 35-years plus of experience in GLBT rights. Indeed, another friend of mine – local attorney, John Nechman – also gave a solid defense of staying in the fight, and pushing through until we all see equality. Perhaps I should’ve listened to nothing but the speeches and simply left.

Unfortunately I hung out, talked with friends, even got a few folks to sign a petition the Young Stonewall Democrats were passing around in order to compile a mailing list. Then came the conversational comments, innocuous but telling.

One man I hadn’t met before who I was signing up on the petition, gushed: “with all these people, I’m so excited to see this! All we need is marriage (rights) and we’ll have it all, everything we’ve ever needed! We can all finally be equal!” He said this looking me straight in the eye. Perhaps I should’ve mentioned I was trans at that point, but I got distracted. 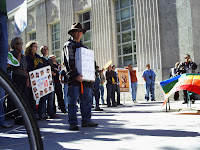 Later I had two friends, one an attorney, muse that if we could attain this “dream” of marriage for same-sex couples, that it would “open the door for equal rights for everyone.” One even noted how if this passes, it will all be because of the “Lawrence Garner v. Texas ruling” regarding what consenting adults do in the privacy of their own homes. That didn’t make sense to me respective of a public issue such as marriage.

The lack of even acknowledging obvious judgments regarding full-faith and credit on marriage rulings such as Gardiner v. Gardiner or Littleton v. Prange’s egregious lapses made me see finally.

Even in full view of all at the rally, I as a transgender was invisible. Fifteen years later, our issues don’t even register on their immediate awareness scale. We are irrelevant (affirming my other T friends’ thoughts about this rally.)

So, what exactly is this "equality" again?

“If I got your back then you best have mine.
When it goes down, lay it on the line ….
I wanna know, I wanna know,
I wanna know … can i count on you when it's time?” — Romper Stomper, Transplants
Posted by Vanessa E. Foster at 11:40 PM

Over at Pam's House Blend, I post a simple diary that made it to the front page.

It asked one little thing: will you be there to remember?

I closed it by noting that I was asked this by one of our sisters:

How many of our LGB allies will be there?

Its dropped off the front page now. Was there for 2 days.

I got my answer, though.

It's amazing to me that, in a country where gay marriage is banned in 80% of states, in most of those cases banned in a manner that will make it nearly impossible to ever make it legal, people are reacting to Prop 8's passage this way.

Gay people and lesbians can pass. They don't need ENDA. It is unnecessary for most gays and lesbians to worry about job loss. Since many T people cannot pass either documentarily or appearance-wise, we need it, along with hate crimes. However, due to the debacle that is Prop 8, along with the need to deal with the Bush economic disaster. The Dems are now going to be scared.

I, frankly, don't want to hear another word about gay marriage until ENDA and hate crimes are the law of the nation. And, no, I don't expect leadership from Barack Obama on this, let alone from Kennedy or Frank. But I doubt I will get my wish.