GLAAD Should Be MAD, And Should Sue! 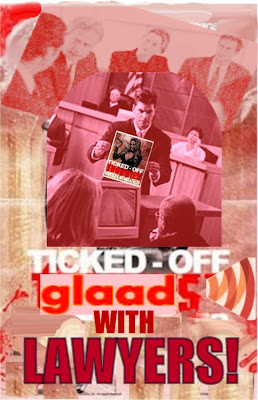 “{It's like] Grand Theft Auto. If you have a bad day at work, you can shoot some people, kill some hookers, trash your car and feel better. It's the same with my movie…. It's a type of release and keeps the momentum going for gay movies.” — Israel Luna discussing his recent film

We’ve seen the past two weeks in Trans America dominated by a low B-grade, campy movie with the operative phrase, “Trannies With Knives,” a nice fear-instilling catch-phrase for phobic America. There’s not much need for me weighing in on the film itself as this subject’s been expertly plumbed by Gina Morvay, Katrina Rose and Marti Abernathey among others.

Additionally I’m not really keen on providing more controversial buzz to help build the film’s mystique. Israel Luna’s nothing more than an opportunistic gay male prostitute turned wannabe media whore and Hollywood film director hopeful. Perhaps he can become the next D.W. Griffith, another filmmaker who made fear and ignorance work for him.

Initially the Trans activist community was up in arms over not just the movie, but questioning where was a response from GLAAD, the community’s big media advocate. Shortly thereafter, GLAAD responded:

GLAAD was recently alerted by community members and allies to a film called Ticked-Off Trannies with Knives that will be screened at the upcoming TriBeCa Film Festival. After viewing the film, GLAAD is now calling on TriBeCa to pull the film from its schedule.

Although the title is certainly problematic, it is far from the only issue with this film. The film, its title and its marketing misrepresent the lives of transgender women and use grotesque, exploitative depictions of violence against transgender women in ways that make light of the horrific brutality they all too often face.

Meanwhile TriBeCa Film Festival went on the offensive. First there was Movieline’s Seth Abramovitch typing out an odiously dismissive editorial on GLAAD and the Trans Community’s protests of Luna’s film:

GLAAD is a funny little organization, on the one hand these self-appointed sentries for positive representation of gays in media, on the other a kind of nutless institution reluctant to get their Pradas dirty on the way to the awards show. …

And even more importantly — isn’t this, like, censorship? Take a cold shower and count downwards from ten, GLAAD. You don’t want to walk down this dark alley. There’s far worse things lurking in it than a couple punnily-named trannies with switchblades.

And of course we “trannies” (with or without switchblades) couldn’t help but notice how Abramovitch literally nuzzles up to Luna’s posterior orifice, crowning him the next Quentin Tarantino and effusively gushing how “his profile [is] heightened immeasurably as the man at the center of this particular contrannieversy.”

Contrannieversy! Nice. A clever way to shove a slur into the middle of a word, and make it appeal to both Hollywood’s and the Glenn Beck / Rush Limbaugh and Anne Coulter audiences! Guffaws all around. One wonders what other kinds of slurs Mr. Abramovitch could mash-up with words, but alas! Three days after his post he resigned to pursue other things. Pity.

“It’s a hot tranny mess up in here!” — fashion designer, Christian Siriano from Project Runway 4: The Season Of Love.

The Abramovitch screed proved insufficient for TriBeCa to cover its tracks though. So they followed with a statement to both Movieline and the New York Times ArtsBeat:

“The filmmakers provided a copy of this film to GLAAD in February, and for weeks the organization had been supportive to the filmmakers. In fact, GLAAD representatives advised the film’s producer, director and cast on how to describe the film to its core constituency.”

“TriBeCa is proud of its ongoing commitment to bring diverse voices and stories to its audiences, and looks forward to the film’s premiere at our Festival next month.”

Last month, GLAAD was asked to meet with the director and cast members prior to seeing the movie to educate them about transgender terminology and issues facing the transgender community. During that meeting, GLAAD was not shown the film and voiced strong concerns about the title and the use of the word "tranny." …

GLAAD hopes that an institution as respected as the TriBeCa Film Festival would be concerned about how this film trivializes violence against transgender people, concerns that the filmmaker has repeatedly shrugged off.

In the wake of this outcry, GLAAD and many other transgender advocates ask that TriBeCa rescind its selection….

Yes, I did note how they went from being “alerted” to the movie by the community to meeting with them the previous month.

Nevertheless, GLAAD also states for the record that they had indeed NOT seen the film and had “voiced strong concerns about the title and the use of the word "tranny".”

And TriBeCa Film Festival, for its part, tries to deftly sidestep controversy by fabricating the opposite story out of whole cloth: they “provided a copy of the film to GLAAD”? the “organization had been supportive”? GLAAD “advised” the filmmakers “how to describe the film to its core constituency”?

Is this what TriBeCa is proud of? Egregious falsehoods about GLAAD?

TriBeCa is, as GLAAD noted, a respected institution that was founded after 9/11 as a way to bring back some normalcy and vitality to a neighborhood devastated after the World Trade Center attacks. Robert DeNiro is one of their co-founders and co-chairs and even Martin Scorsese sits on their board of directors. What they’d attempted to accomplish with the festival heretofore is laudable.

Yet they’re committed to diverse voices, but have no problem dismissing us – ahem – ‘ticked off trannies’ in this “Trannygate.” It must also be noted that while Israel Luna’s work is featured, transwoman Kim Reed’s Prodigal Sons documentary (which has drawn quite a bit of positive press) is not – and she lives right there in the neighborhood!

With all this controversy brewing TriBeCa felt it would simpler to concoct a story and attempt a smear campaign on GLAAD for advocating for us. Essentially GLAAD was publicly defamed! And this is the Gay & Lesbian Alliance Against Defamation, no less!

GLAAD should pursue a libel suit against TriBeCa Film Festival. This is an excellent fundraising opportunity for them, and there’s certainly no reason why they shouldn’t pursue it. Yes, I realize this won’t put a penny in any Trans pocket. However, GLAAD stood up for us and got publicly smeared and it was their organization that TriBeCa damaged.

One thing we’ve noted in the Trans community is how easy it is for our own leadership to be slandered and libeled and have it become urban legendary fact. When there’s no brush-back in return, it only emboldens those same parties to continue the character assassinations. They don’t stop – they get worse.

And shame on TriBeCa for the lies!

“Good name in man and woman …
Is the immediate jewel of their souls.
Who steals my purse steals trash; 'tis something, nothing;
'Twas mine, 'tis his, and has been slave to thousands.
But he that filches from me my good name
Robs me of that which not enriches him
And makes me poor indeed.” — from Othello, by William Shakespeare
Posted by Vanessa E. Foster at 1:58 PM 52 comments: