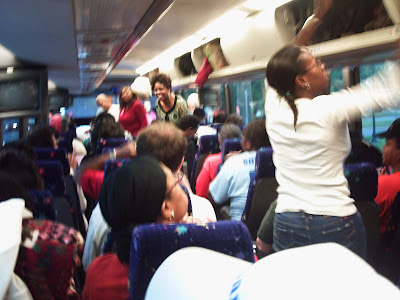 Don't ask me how I came to this decision -- it was purely spontaneous. However, I find myself in Dayton, Ohio this morning readying for the first day of blockwalking. The numbers aren't there for Texas, so I just grabbed a few shirts, my travel kit and literally jumped in the car and headed to the bus taking us to Dayton. It was a rather long trip -- 26 hours on the road. But we can all say we played a part in history instead of sitting on the sidelines watching. 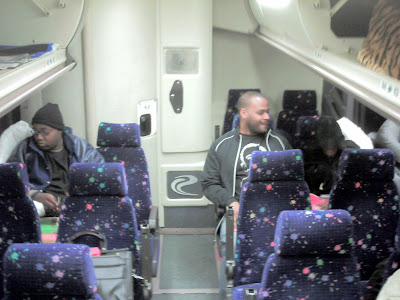 Coincidentally enough, I sat next to another Foster coming up: Mark Foster just happened to plop next to me ... a thirtyish African American from North Houston who brought his nephews, Delavince and Jarrett Foster-Gibson, ages 18 and 14 respectively. We were the most common surname on the bus, oddly enough. Fosters are committed people, apparently. 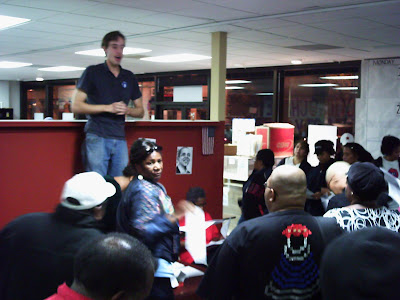 We arrived to find a well-organized and fired up staff in Dayton's downtown HQ. During our training period, we ended up suspending it briefly as we were all part of a nationwide conference call with Barack Obama -- the first one I've been part of! After the call, we divided up into various teams dispatched to numerous local volunteers who housed us. Our hosts were on the city's northern suburbs, and our staging location was in the near north side. Tuyen Nguyen was our driver designate, and I was navigator (being the map-oriented one of the bunch). It's been a wonderful few hours in Dayton, much more modern city downtown than what I'd pictured. Our hosts for me and my blockwalk partner Tuyen are wonderful: Craig & Cindy M. I'll write more as I get chance, but these will obviously be very short blogs with quick thoughts as I'm in the midst of this critical task. For now ... it's battle time!

“Spontaneity is the quality of being able to do something just because you feel like it at the moment, of trusting your instincts, of taking yourself by surprise and snatching from the clutches of your well-organized routine, a bit of unscheduled plea” — Anon.
Posted by Vanessa E. Foster at 6:40 AM