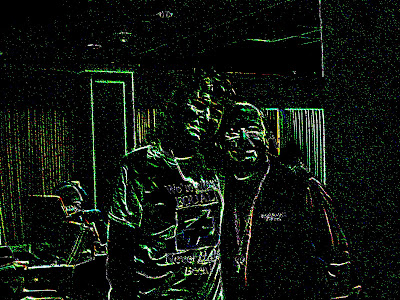 This past Saturday afternoon, a group of transgenders and a stand-in for one of our absent group members had the pleasure of meeting and asking Bishop Gene Robinson a series of questions – most gauging his knowledge and opinion on transgender issues.

In the trans panelist group were organizer Kelli Anne Busey of the Dallas Transgender Activists Alliance (DTAA), Tina Seitz from Detroit, Courtney Sharp from New Orleans, Lisa Scheps from Austin and myself from Houston. At the last minute we had to have a stand in. Kelli brought in Michael Robinson, a gay African American from Dallas who’d coordinated a local demonstration regarding a vicious hate-crime beating of a passing acquaintance that he’d witnessed in Dallas’ gayborhood.

The original format was a bit inquisition-like, which I didn’t understand originally. We would ask the Bishop a couple questions each. Some of the panelists’ questions though were admittedly to be softballs. Anyone who knows this writer knows what kind of questions mine were ….

Once the Bishop arrived, he greeted everyone warmly and was quite open and engaging. There was a change requested in the format immediately before the panel began, to make it less structured and allow for follow-up questioning – which also allowed a bit more leeway in the questions themselves. That turned out to be pretty enlightening for us.

“God and I have been about this for quite a while now and I would be really surprised if God were to want me to stop now.” — Bishop Gene Robinson

One of the early questions from Courtney asked the Bishop’s position on clergy who marginalized members of the trans and other GLB community members. The Bishop took to task some of the congregations for being timid in not standing up more strongly, even though they support a welcoming, all-embracing congregation. He also acknowledged that there are those whose minds were going to remain closed and who would do anything possible in order to dishearten those they wanted to keep out of their church, but the Bishop cautioned to never give up and to do what was necessary to keep pushing forward until these churches were inclusive.

Michael’s question and story was especially poignant as a man he saved was beaten within an inch of his life (badly enough that the police could not identify him from his photo ID). Yet even in the face of this, there was no response – much less a protest – of any kind from Dallas’ gay community over this incident until Robinson began organizing the local gay community of color to collectively raise their voice. Michael asked what was necessary to bring the community together as one in caring and support for all in the GLBT realm.

The Bishop commiserated, noting there was a tendency to be focused on their own circles within GLBT, but not standing tough when they needed. He noted that the white gay community, particularly, was lacking in courage comparative to the civil rights movement before it, adding that they were afraid of the risk (comparative to the civil rights marchers who understood every time they walked out their doors that they might likely be assaulted or arrested – or both). He finished by instructing Michael to continue raising his voice and holding the leadership’s feet to the fire on what he said was fake incrementalism.

My inquiry to Bishop Robinson began with his own quote in the Dallas Voice: “I don’t think we always have to hold out for the full loaf before moving forward. You get what you can accomplish and then continue to work for the rest of it.” I asked if his position was based upon political expediency or if there a moral or scriptural basis in advocating for feeding only some with half a loaf? He replied that we should strive for what we could realistically achieve at the time, but then began ruminating about his own answer and ended up a bit stumped with that question. At least those of us on our side of the panel could see him mentally kneading this new conceptual lump of dough, questioning even his own stand on his original notions of what to make of this. On a follow up, he was reminded of his response to Michael that the community needed to be more courageous and forge ahead despite the risks, on which he concurred.

So I followed up noting Texas’ own incident of the “false incrementalism” with the James Byrd Hate Crimes Act and its broken promises (leaving behind transgenders), asking if we should be more assertive and how to possibly do so without being summarily marginalized afterward. Bishop Robinson was surprised and seemingly incredulous that we’d be marginalized for speaking out as such. Both Michael and I nodded affirmatively as we personally knew that marginalization. The Bishop responded that we should forge ahead and assert ourselves regardless, and to never give in.

When Lisa Scheps reminded him of his own quote to the Dallas Voice and his response to her question earlier, and asked if this meant that those given none of the incrementally won “half loaf” should hold everyone’s feet to the fire – including him – the Bishop agreed. He noted that if he wasn’t unwavering enough to stand behind what’s right, then he needed to be taken to task as much as other incrementalists, and we should be raising the issue and raising our voices.

As Kelli Busey noted in her blog on the panel, it was interesting to see the two philosophically very divergent sides in the transgender community actually hear the same advice from Rev. Robinson: that we should be more audacious in raising our voices. For all to see, they get to see NTAC wasn’t the heretics after all! Au contraire!

“It's not about me. It's about not having to be ashamed.” — Bishop Gene Robinson

After the panel wrapped, the documentary crew following the Bishop invited us up to his personal suite. The crew took turns interviewing Lisa, Kelli, Michael and Tina. While they were taping, I went downstairs with Michael when the Bishop decided to take a smoke break. Down there, we had a chance to talk about our personal lives a bit.

He’s very disarming in person. I found him quite candid and earthy. It was comfort to find the Bishop is someone who remembers well what life is like on the disadvantaged side of town, and privately agonizes over some in his own community who neglect to see it (or forget what it was like once they’ve climbed out). It’s a philosophy I share as well.

The Bishop’s got a number of people’s ears – and not just within the GLBT community. He and I also discussed another thing we had in common – working on getting Barack Obama elected. The President-Elect reportedly even visited with Bishop Robinson on three occasions. As we know now, the trans community has a powerful ally in the White House!

If we have Bishop Robinson with a possible avenue to influence the President on our issues, we may be able to effectively thwart most any obstacle either Barney Frank or HRC (our community’s political gatekeepers) can throw before us.

While we panelists may have come away with different impressions, I get the sense there’s a legitimate chance of having made a key ally in Dallas. Who better than someone of humble beginnings who understands the crush of powerlessness and voicelessness borne of his own past?

“So the question is can we still live together and hold on to one another while we resolve this issue?” — Bishop Gene Robinson
Posted by Vanessa E. Foster at 12:52 PM

Thanks for this post, and for being part of the conversation, Vanessa. It sounds to me like the group, with +Gene, did some important grappling. If we all hang in there together and keep talking, we'll continue to make progress. peace, Cameron