Tricks, No Treats For Trans As Psychic Vampires Bleed Us Dry 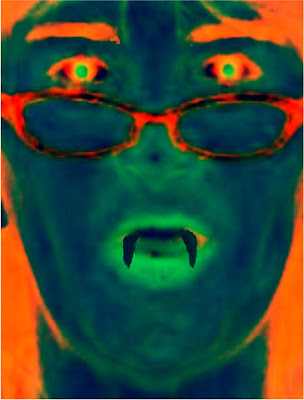 “I ain't gonna work
For no soul sucking jerk.
I'm gonna take it all back
And I ain't saying jack.” — Soul Sucking Jerk, Beck

After a three month self-imposed hiatus, I’m back. A bout of depression and physical fatigue was wiping me out and gave me pause. After my friend Lisa Gilinger noted my recent inability to write about what I was feeling, and realizing my attempt to rid the blues cycle had little beneficial effect, it was obvious my pulling back wasn’t helping me.

So I restart on, of all days, Halloween. And tonight’s subject, something I’d recently learned about, is quite appropriate: Vampires.

Recently I’d watched an episode on the History Channel on the myths, legends and facts on vampirism. Everyone knows about vampires from popular culture. There are lifestyle vampires who are into the role-playing and the gothic fashion and even living it as a permanent style. There are also the most commonly known sanguine vampires – those who actually drink blood (though the attacks and neck-biting tend to be more the stuff of novels and movies.)

There is also a lesser-known category called psychic vampires (psi-vamps for short). Unlike sanguine vampires, they don’t suck blood. Instead, they feed off of others’ life energy – they suck souls. To my surprise, it made was eerily familiar to how I’d been feeling for quite a number of years.

Psychic vampires, when you come into contact with them, don’t stand out in any physical way. Rather, they usually have magnetic personalities but can otherwise appear rather ordinanry. They seek out vibrant, energetic, creative or hyper individuals or crowds of energetic people.

Per Michelle Belanger’s book “Codex: A Manual of Magick and Energy Work,” psychic vampires are unable to generate their own "life force," and must feed off of others, not just as an ability, but as a necessity. Feeding can cause an amphetamine like rush and most psychic vampires report to get greatly invigorated physically and psychologically. If unable to feed on others, symptoms of "energy deprivation" include extreme fatigue, depression, mood swings and immune system suppression.

While there are different types of psi-vamps such as elemental and symbiotic, emotional vampires only feed on certain emotions others elicit.

Usually, the negative psi-vamps will exert a strong mental control on the victim, and do as much as possible to provoke feelings of distress, shame, and sorrow. These types exhibit a seemingly insatiable need for conquest and, as such, an endless appetite for drawing energy from others – in essence, a Type A, uber-competitive version of a psychic vampire.

“Set all on ‘rave on,’ let’s see some action.
We’re gonna shine on, get satisfaction.
I am the singer. I take control.
I point the finger. I take your soul….
This is the only way to feel!” — Freedom No. 5, Scorpio Rising

While I’ve never given much belief in vampirism, it’s certainly coincidental that the trans community with all its initial energy and talent typically ends up burning out quickly, leaving us with husks of former leaders. While many gay and lesbian leaders have long, productive careers and lives, typically only the rare trans individual manages to survive similarly.

Historically, only two of the Trans community’s political leaders come to mind in a similar vein. And typically, most of the folks these two meet, work with briefly or for a period of time, end up feeling completely depleted (physically, financially or spiritually) after. Ironically, the older activist of the two is the inspiration and example for the protégée who only popped up in this decade, and who’s now overtaken and even fed upon and conquered her mentor.

It’s a rough world out there: feed or get fed upon.

Curses are something I don’t believe in either, yet the consistent pattern since my own reversal of fortunes beginning on Jan. 1, 2003, and the consistent string of horrific luck often makes me wonder if curses actually do exist, and are possible reason for my own situation. While I’ve personally hung in for over thirteen years, my situation is only agonizing refusal to give up. My tenacity’s come at a huge financial, spiritual, physical and emotional toll, though. Thus, the last-legs level depression. There’s virtually nothing left.

Incidentally it’s occurring on a constant and ever-widening basis throughout the community. Our community’s historical leadership appear to be dropping like flies, and its draining effects over time are pretty consistently noticeable.

The Sob Sister who always considers her/himself the victim. The world is always against them and they’ll recount every horrible thing that has happened, wallowing in every perceived slight and whining all the time.

The Charmer, a constant talker or joke-teller who has to be the center of attention ad-nauseam.

The Blamer who cuts you down with criticism doling out endless servings of guilt.

The Drama Queen who lives in extremes of emotion with life being unbelievably good or horrifically bad and wearing you out while blabbing on and on and on.

Psychic vampires have various ways of sucking your energy. Sometimes it can merely be a casual contact, but they also have the ability to reach their victims long distance through anything from phone calls, to dreams, to even visualization (essentially meditating and seeing themselves drawing the energy from a vibrant individual into themselves and feeling the increase in power and invigoration.)

Effects on the people they drain might include: depression, fatigue, or loss of energy when people are around you, people sometimes avoiding you or withdrawing from you for no apparent reason, or people giving you harsh feedback about your alleged neediness, clingyness, intrusiveness or negativity.

Negative comments are very efficient at draining the life right out of you. ‘You can’t do that; you should do this; are you living in wonderland?” are all very effective at bringing you down. “What’s wrong with you? You are bad” – are (psychic) vampire tools that make you feel weak and small even if you are robust and tall.

Indeed I’m fully familiar with the chorus of steady criticisms beginning in 2000 on, beginning with the constant negative feedback from HRC folks to the latter trans community leader, post-GenderPAC schism. It was well-orchestrated and made for a nice echo chamber effect of cast suspicion and dubious intent on anyone in the ragtag activist element in the Trans Community.

It never abated and instead continues to crescendo even now from most of the very same parties and even some newer psi-vamp entries into the game. Just recently, none other than Mara Keisling passed along a typical comment to Ethan St. Pierre, declaring grassroots activism “dead.” It drew a rather emotionally rancorous response from Ethan, and he’s now paying a price most severe as the retribution is continuing to mutate and virally grow like an old 50’s era horror movie monster.

Yes folks, while Count Dracula may be figment of a novelist’s imagination it appears that at least psychic vampires are for real. And it appears the active members of the Trans community are all part of a mass psi-vamp feeding frenzy.

Google psychic vampires and read up on them, as well as how to keep them from depleting you and pulling you down. Break their cycle of usurpation. 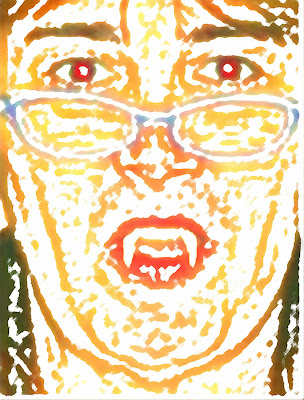 Oh! And eat lots of garlic!

"It was enough to make an old world monster go back into the earth, this stunning irrelevance to the mighty scheme of things, enough to make him lie down and weep.” — The Vampire Lestat by Anne Rice
Posted by Vanessa E. Foster at 9:17 PM 6 comments: