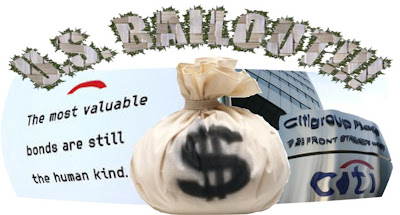 Having not monitored the news sites recently, I had to hear it on the TV morning news: Treasury Secretary Henry Paulson has decided the solution to our nation’s economic woes is for banks to lend more, and for consumers to spend more. At first I thought it to be quite a joke, until I realized they were serious!

What planet did we get this current Administration from? And can we send them back? Now?!?

“Neither a borrower nor a lender be;
For loan oft loses both itself and friend….” — from “Hamlet,” Act 1, Scene 3 by William Shakespeare

The Bush Administration (yes, those “free market fiscal conservatives”!) wants to dump $800 billion in additional funds into the struggling U.S. economy. Even we democrats see this as ludicrous! This is even more than Congress approved in October’s bailout - the Wall Street Welfare Act. And without even a vote over it! I’m absolutely furious with this brain-dead president’s signature statement deceit and swindling of the American economy! We’re NOT brain-dead, we see every bit of this and we are furious! How do we make this clear to Washington?

Sure, maybe they’re meaning this for only the upper 2% of the economy – those who’ve done well during Bush’s “Economic Recovery” these past eight years. Yet they certainly weren’t structuring the message that way! And even if is for the upper crust folks, why need a program to “make $200 billion available for a range of consumer loans - including credit cards and car loans”? With cash in their bank accounts, do you think these moneyed folks would believe it wise at this time to borrow money? Why?

They should’ve been already picking up the slack that the vast majority of us used to consume in the American economy as they’ve got it all already. And typical to wealthy types, they’re saving and investing – not consuming! Wisely investing over spending as they always do … get it yet?

But Paulson whines that "this lack of affordable consumer credit undermines consumer spending and, as a result, weakens our economy."

As for those of us in the lower 90’s, the last thing we need to be doing is spending on anything that is not an absolute necessity!

Why? Here’s the answer: the Flat Earth. Call it the global economy, free markets, whatever … jobs have been heading overseas for years, wages had been flat or deflating, costs on everything (especially necessities) have gone up until recently, and we’ve already been tapped out. Now what few jobs still existing are evaporating here, and even beginning to affect the Third world burgeoning economies.

Bottom line, there are few jobs down here, they won’t pay much, and it’s not changing any time soon. Free markets, remember? And as a result, as well as the crunched credit, no one should spend (unless they’ve got a death wish!) It’s a recipe for bankruptcy, foreclosure, homelessness … you know, really good stuff! Well, we’re trying to stave off that ‘good stuff’ Mr. President and Mr. Paulson. It’s called “fiscally conserving” our meager resources. Quite a concept, huh? Does that sound familiar?

Even if we do happen to find jobs, HELL NO we’re not gonna be spending any time soon! We’ve learned! Bush and the Neo-Cons have taught us all that we common citizens are on our own. There is no hope, no cavalry running to our rescue, nothing to save or bail us out (those are only for large corporations and their execs – Bush’s base). If we can’t save ourselves, we are shit-out-of-luck … period. We’re saving up for the future calamities we’ll need to be prepared to weather.

To soothe us (I guess), our Treasury King described the $200 billion program as a first step, one that could be expanded later to include different kinds of debt, including assets backed by commercial real estate mortgages and business debt. Ah … here comes the rub! Now the true nature of this is coming clearer….

Paulson stated the fact that the Fed and Treasury had to get an additional $800 billion into the system is not a sign that the $700 billion bailout of banks and Wall Street firms passed by Congress last month has been a failure. He said that without that program, it is likely that the financial markets would be in even worse shape than they are today.

It’s not about the common consumers at all. It’s about continuing to prop up the banks who received bailout money already, have not been lending (and have not been making profit) and have bottom-lines that show near-zero revenue. And maybe after borrowing more money we have no jobs to pay off, we’ll go out and buy stuff that pumps business revenue into the other industries.

The arrogance intrinsic in Paulson’s statement that the initial bailout is not a failure is jaw-dropping.

Message to the Bush Administration and all “Free Market” Republicans: If you want people borrowing money and consuming, go to your patriotic CEO’s and CFO’s, your executive class, your wealthy investors, or “the haves and have-mores” that Bush called his “base” so famously displayed in the movie Fahrenheit 911. They are your only hope to save your American economy.

Don’t even bother us “spread-the-wealth socialists” who live paycheck to paycheck if we’re fortunate enough to have a paycheck right now – which many of us do not! All we get from our delusional “fiscally conservative” Republicans is “spread-the-debt” fascism. Thanks!

My house got damaged during Hurricane Ike, insurance was extremely stingy (leaving thousands short of getting it fixed), FEMA denied me. If you think for half a second I’m applying for even a small, low-interest Small Business Administration loan to repair my home, especially now that I’m having troubles finding even temporary jobs I’ve relied upon the last six years, you’re way beyond wrong! There’s no way of knowing what’s coming at me, and I’ll be damned if I feel confident enough to take out some loan even for necessity!

So Mr. Bush and Mr. Paulson, if you entertain any delusions of America suddenly running en masse down to the bank to take out a loan to bail out your Wall Street buddies once again, snap out of it! We can’t afford to participate in your American economy any more, nor will we further bankrupt ourselves to help you.