There’s been a lot of emotion pouring out as a result of the elections two weeks ago. Clearly having someone who cares about human beings (as opposed to corporations and the “haves and have mores”) in the White House has elicited celebrations and a sense of hope once again in America. Yet along with that has been the intense acrimony generated in a number of states regarding same-sex marriage – most especially in California, where marriage for same-sex couples was once legal.

California’s case has understandably generated raw emotion. It’s this emotion that has fueled this event, taking it from being “just another state voting down same-sex marriage” and making it a quasi flash-mob movement. It is also, of itself, wresting the marriage movement from the hands of the initial organizations leading it and putting it into the hands of the collective pool of anger, resentment, frustration and pain. Those in need are now seizing the issue and not about to relinquish it.

Watching this spontaneous combustion of this marriage rights wildfire over the past two weeks has been inspiring. But the mob has also forsaken anything but the raw emotion to drive this forward. It’s pure heart and no head at this point, and that will prove problematic down the road.

Before the recent nationwide rallies this past Saturday, in effort to advertise the protest against Prop 8, I received a flyer via Facebook from a friend. Not knowing what it was (as it merely said I was tagged in a photo), I opened it to see a poster stating “I was a Victim of H8.” My name was tagged to that. Immediately my reaction was visceral: why was I being advertised as a victim of hate (as in hate crime)? When it was mentioned to me that it wasn’t about hate crimes as in violence, but about marriage (e.g. Prop 8, which was a little esoteric for those of us outside of California), it drew my ire again.

It was not a good subject to breach with the Transgender Community.

This flyer was coming out a week to the day before the Transgender Day of Remembrance, our community’s international memorial to remember our victims of hate crimes – as in violence and murder due to hatred. This writer failed to see how this made an easy transition from violence and murder to being equated with keeping same-sex couples from marrying via removal from law.

If they wanted to conflate these two distinct issues and term them hate, then one could use the same logic to say the Transgender Community was collective victims of hate by the gay and lesbian political leadership personified by HRC and Rep. Barney Frank, et. al. for their unceremonious removal of gender identity from this year’s Employment Non Discrimination Act (ENDA). Or for that matter, Sen. Ted Kennedy for removing us from the very Hate Crimes Prevention Act in the previous session of Congress! How do they feel Sen. Kennedy, or Barney Frank or HRC would react to being perpetrators of H8? Seriously, beyond the Prop 8 histrionics, that was a severe diminution of hate violence and not looked upon favorably. 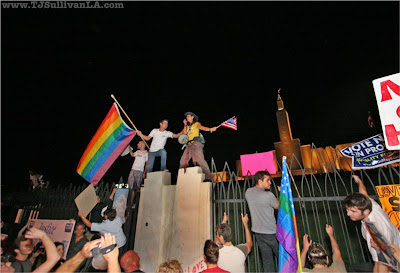 More troubling were reports at that same time of the protests in California in the aftermath of Prop 8. Numerous reports of the epithets lobbed at African-Americans – even directed towards gay black men attending the protests – were counterintuitive, to say the very least.

Geoffrey, a student at UCLA and regular Rod 2.0 reader, joined the massive protest outside the Temple of the Church of Jesus Christ of Latter-day Saints in Westwood. Geoffrey was called the n-word at least twice. (http://rodonline.typepad.com/rodonline/2008/11/n-word-and-raci.html)

It was like being at a klan rally except the klansmen were wearing Abercrombie polos and Birkenstocks. YOU NIGGER, one man shouted at men. If your people want to call me a FAGGOT, I will call you a nigger. Someone else said same thing to me on the next block near the temple...me and my friend were walking, he is also gay but Korean, and a young WeHo [West Hollywood] clone said after last night the niggers better not come to West Hollywood if they knew what was BEST for them.

Los Angeles resident and Rod 2.0 reader A. Ronald says he and his boyfriend, who are both black, were carrying NO ON PROP 8 signs and still subjected to racial abuse.

Three older men accosted my friend and shouted, "Black people did this, I hope you people are happy!" A young lesbian couple with mohawks and Obama buttons joined the shouting and said there were "very disappointed with black people" and "how could we" after the Obama victory. This was stupid for them to single us out because we were carrying those blue NO ON PROP 8 signs! I pointed that out and the one of the older men said it didn't matter because "most black people hated gays" and he was "wrong" to think we had compassion. That was the most insulting thing I had ever heard. I guess he never thought we were gay.

Jasmyne Cannick has a similar and unfortunate report.

"I have received several phone calls from Blacks, both gay and straight, who were caught up in Westwood around the time of that march. From being called 'niggers' to being accosted in their cars and told that it was because of 'you people gays don’t have equal rights and you better watch your back.' These gays have lost their damn minds."

Even if 70% of African-Americans voted for Prop 8, there wasn’t substantial enough numbers of African Americans in the total vote to make that the difference in its passage. It’s unknown if any other ethnicities were singled out similarly.

Previously, the thuggish displays and verbal intimidation and threats were the province of the red-meat GOPers. In fact, while watching the second video, I initially thought it was the angry, gesturing man who was the conservative Prop 8 supporter as the Christian woman was standing with the Prop 8 signs behind her, and wasn’t able to get a word out. To my own surprise about 30 seconds through, I realized I had it backwards. Surely the woman shouldn’t have been there picking at scabs. But the displayed response on TV was bracing. In fact, I have no doubt this will be (if not already) widely distributed throughout neo-con America and twisted to validate their continued disenfranchisement of us all.

There’s no love lost between the religiopolitical elitists and I. But I fail to see how knocking crosses down and stomping on them in full view of TV cameras (and even having other protesters rush in with their own video to tape it!) are doing our community any favors on getting the two polarized sides closer to understanding each other. It’s just more shock value meant to repel, taken straight out of the red-meat neo-con handbook.

It’s true that reciprocation is the essence of equal treatment. But with whom are these Prop 8 protesters equating themselves? Are such displays the “politically maturity” or political acumen that they’ve tried to instill in trans activists throughout the trans political movement? If that’s the case, then I’m happy to be a poor student at that lesson!

Longtime gay rights advocate Dean Trantalis of Fort Lauderdale, FL, and others on a recent conference call expressed concern that the gay rights movement has become too focused on marriage, and is now paying the price in other more critical areas.

"Marriage was never our issue," Trantalis said. "It was thrust upon us by the other side, and they've done a very good job of beating us up over it." Trantalis and others are worried that even as the gay rights movement continues to win court victories, those very victories may prompt stronger and stronger backlashes, jeopardizing other hard-won rights, from adoption to anti-discrimination measures by local governments and in the workplace. They noted the recent adoption law enacted in Arkansas on election day as an example of the brushback in other non-marriage legislation.

Indeed, many of the critics of the failure have been looking for the reason (easily turned into the blame game). The initiative to defeat Prop 8 raised nearly four times the money, had all the star-power behind them seemingly, had a very active core of staff and volunteers … and yet lost in the bellwether of progressive thought in America.

Sitting with an African American gay men’s group here in Houston, the question was posed on their take on the marriage issue. Many in California blamed the failure of No on Prop 8 leaders to reach out to the African-American community, both gay and straight. There was at least one prominent minister in L.A. who could’ve been a strong and eloquent voice for defeating Prop 8, and who has been strongly criticizing other clergy over supporting Prop 8 – he was apparently never approached.

But when I asked how the African American men in the room felt about the rallies, the lack of adequate integration into the Prop 8 fight, they were more candid and casual on the issue. One even admitted he felt a little guilty that they weren’t out in larger numbers assisting in the fight.

For this group, marriage rights are a goal, but one of many they must address and not the most critical. “Being black, we still have a lot of things on our plate due to race, employment and discrimination ….” He noted that there’s a distinction between where white gay America is and where their community is. “Like (transgenders), there’s a lot of perception based on how we look.”

“You never turned around to see the frowns
On the jugglers and the clowns when they all did tricks for you.” — Like A Rolling Stone, Bob Dylan

Unlike the leaders of the modern (and uniformly white) gay/lesbian movement, marriage isn’t the predominant goal before Gay People of Color. There are still a number of other issues unaddressed … if they only had mind to learn.

For the trans community, it feels as if we’re along on Mr. Toad’s wild ride. We never get to know which direction this movement is going, have no input on where it should go, and Mr. Toad can’t hear us anyway. We’re just along for this ride – exhilarating or harrowing, so we hang on and hope for the best.

Meanwhile, the straight community’s impression of what’s happening currently is what’s got me fretting the most. At the moment, the gay and lesbian community could care less what they think and are just as likely to chase those not on board with them completely out of their gayborhood with neoconic zeal and menace. How will this be replayed over the coming years? Beyond marriage, how will this affect the rest of the rights movement (not needed much by the leaders of this movement, but still primary concerns to the ancillary segments of their LGBT conglomeration)? If successful or if not, we will learn from this experience.

The voices embittered need their concerns heard. But from an advocacy standpoint, I see the actual job of negotiating this in the years to come may now be a much tougher road.