So … Whose Side Are You On Today? 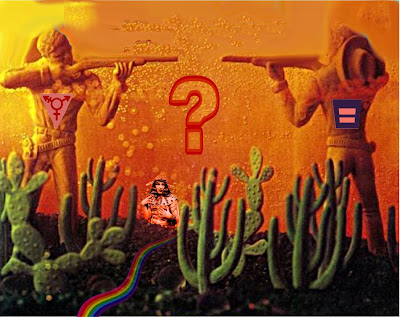 “I absolutely believe in assimilation…. I don't look at sexual orientation as that big of a deal. It's just an orientation.” — Chastity (now Chaz) Bono

A year back, I made a decision to stop chasing the “breaking news” blogs in the Trans community. There’s plenty of folks out there who can expertly do it, and I didn’t feel the need to strive for redundancy in reporting. This blog will be an exception.

A good friend of mine reported back from the recent Be All conference in Chicago which wrapped up this past weekend. With an eye to pulling in attendance, the event’s special draw and keynote speaker this year was Chaz Bono; fresh from visits to Oprah, David Letterman, et. al.

The keynote went well from all reports, and there was even an Oprah-styled Q&A of Bono after his speech with Mara Keisling up onstage with him.

Following the keynote Q&A the music rose, and from the rear of the stage entered Regina Upright – a local drag queen who (per reports) does a decent Cher impersonation. Faux Cher came out, “fishnetted up to her waist” replete with leather jacket and black curly fall, and began her performance, focusing initially on Bono and working over towards Keisling for some onstage “crowd support.” Apparently Bono and Keisling were having none of it, doling an icy response to the drag artist.

Ms. Upright picked up on the cold shoulder and stepped down from the stage to entertain the keynote lunch crowd. According to the report, both Keisling & Bono were rather visibly steamed and eventually walked off stage during the performance (presumably in protest.) Meanwhile about half of the lunch crowd enjoyed the drag show and blissfully tipped Ms. Upright.

"With hair, heels, and attitude, honey, I am through the roof!" — RuPaul Charles

Ironic? At first glance it would seem so.

Chaz Bono in his previous identity (fka: Chastity) was once the lesbian activist poster-child for gay and lesbian equality and a very useful tool for fundraising for his former community organization, the infamous Human Rights Campaign. Back in the HRC days he uttered nary a T-word, being a good company recruit. And of course Mara Keisling gave birth to this recent era of Trans coziness with HRC, of always deferring to gay and lesbian leadership (even on Trans issues) and of holding the tongue with our “allies” in GLB while being unafraid to take on her own community.

However more recent times have seen Chaz’s transition and an end to the public hawking of HRC. And in 2007 Keisling led her NCTE members in joining NTAC and the rest of the Trans community in protesting HRC banquets after the ENDA duplicity debacle that year. Since their two reversals, though, there’s been nothing publicly indicating where either of them stand on HRC or the era of Gay Inc. and GLB(*t) other than the knowledge that the big gay funders continue pressing NCTE to work collegially with HRC once again.

But Chaz and Mara dissing a gay performer at a trans event?

Below the surface, though, there are other reasons in play. If folks have been paying close enough attention, they’ll note that Bono has indicated that he and his mom, Cher, have been “working through things.” Reading between the lines, his mom’s having issues coming to terms with his transition.

Yes, we’re all aware of Cher’s friendship and generous support of the gay and lesbian community and its issues. something I can relate to as my own mom kept pressing me on why I “couldn’t just be gay” for well over a year into my transition. My mom’s best friend was gay, something to which she could relate. But she couldn’t relate to me. Go figure!

So some of our own may find it surprising that when Cher was supporting “GLBT” causes, she was avidly supporting the L and the G, maybe even the B. But the T? Eh, not so much. It’s an irony that I’m certain has not escaped Bono’s attention.

As a result, the “surprise” drag performance by someone dressed as his own mother in explicitly revealing attire was a reminder Chaz wasn’t seeking. Then the added bonus of a caricatured impersonation of gender (even if it was trans women) at Bono’s keynote by a gay man (especially considering his time with HRC and the likelihood he was privy to some choice opinions on T while he was still an L) surely helped the show go over like a lead balloon.

Apparently some in the keynote audience did pick up on the faux pas and were “aghast.” The other half of the crowd were blissfully unaware, laughing, tipping and enjoying the show.

What was the message to take away from this?

"All sins are forgiven once you start making a lot of money." — RuPaul Charles

Once upon a time about a decade ago, we had clearly defined who was opposing us from within GLBT: the conservative elite G&L mindset, personified by HRC and others of similar opinion. Up until about 2002, it was de rigeur for us to be aware of what occurring in Trans America, to know our T history, to have spirited debates but end up unified at the end of the day against those who opposed us being equals.

Since then, the pendulum has swung back. It’s now fashionable to eschew our T history and to frown upon and marginalize those of us who speak out. Unity died in favor of allowing trans individuals to work for and with other communities and groups on causes that may have little or no impact on trans needs, but which may carry some individual reward at some point.

And so we find ourselves today. A sizable portion of us are unaware of what’s happening to our own at this moment in time; thus the invited Cher drag performer for Chaz Bono. The powers at Be All weren’t doing it of meanness. They were unaware.

Similarly for those who now wish to ally or work with HRC or similar groups who may not consider us as equals, they can do so without troubling themselves on how it affects the community. Those who support the HRCs of the world today, may well be the ones who publicly oppose them tomorrow … and maybe even support them yet again a couple days down the road. What’s to stop them?

Speaking out and letting folks know what’s happening? That fell out of favor about a decade ago. Why ruin the moment for these individuals …?

Oh! Happy pride month, y'all. Are we proud? 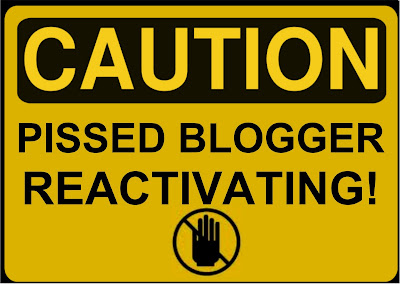