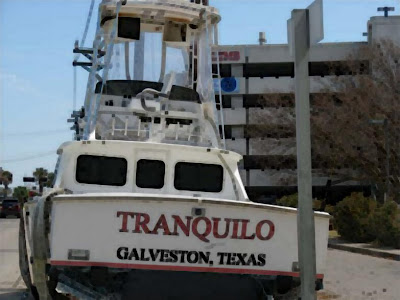 "After the hurt has gone away,
Oh will we feel the pain?
After the storm begins to turn,
Oh will we ever learn?" — After The Storm, the Outfield

Yesterday was the two month anniversary of Hurricane Ike. From a time perspective it doesn’t seem like it’s been that long. Personally, I will credit the political campaigns – and specifically the Obama campaign – for contributing to time’s supersonic flight. Then again, it does seem worlds away from the summer heat and humidity from two months ago, especially considering we have our first brisk norther which is expected to drop our nightly temps in Houston down to the 30’s for our first time. Nights in the 30’s are about as far away from summer as one can get.

But as it’s been two months, I thought I’d do a periodic post-script of life after Ike.

There were a few things we discovered after my last hurricane blog entry. At the time, I couldn’t figure out why my neighborhood smelled of such a pungent musk and rather gutter-like. It turns out there was a simple answer. With the loss of electricity across the area, all of the sewage lift stations lost power too … which caused overflow of effluence into the area’s creeks and bayous.

Yep, I was catching a whiff and even enjoyed the residual aroma of the raw sewage leached into the north fork of the Upper Brays Bayou (in my case) running in back of my house. To be sure, it was a common complaint across the city. At least I can take solace in the fact that I’m in the upper bayou instead of the more unfortunate folks further down our city’s bayou systems who had the collective of all of the other sewer stations further downstream. I’m glad nobody took the notion to go swimming!

Another somewhat annoying discovery was that a large number of the semis filled with ice were parked in Houston parking lots, waiting … and all the while, places in one of the rural areas hit hard across Galveston Bay, who were desperate for any ice, went without. Much of the ice was ordered to be melted in some cases. FEMA decided the need wasn’t there, and figured it cost more to have the drivers sitting and rigs running than it cost to just melt the ice and send them home! Something about this really speaks to the level of planning (or lack of) by the Bush Administration’s version of FEMA / Homeland Security Dept.

Shortly after I ended my blog, all of the gasoline shortages here, as well as lack of grocery staples around the Houston metro, ended. Galveston and areas closer to them obviously suffered longer with these issues, though surprisingly they seemed to be in much better spirits than one might expect, living without essentials for such extended periods. Unfortunately, there’s been very little news that’s come from points across the bay, in the Bolivar Peninsula communities hit the hardest. That’s been a bit curious.

Speaking of Bolivar, there are still no firm numbers on the death toll, the most recent number I’ve heard was 82. As mentioned in my previous blogs, there may be bodies swept out to the gulf, post-storm surge. There are also a number of sand spits and islands dotting the bay side of the peninsula that have yet to be fully examined, not to mention the places on the peninsula still in varying states of clean up with the same lack of full search for body recovery. The last estimate I heard on TV news was that eleven people (however accurate that may be) are still unaccounted for in the coastal communities.

The coastal communities themselves, Galveston being epicenter of this, are in the process of rebuilding. While FEMA has been processing the applications and attempting to get things back to some normalcy, there has recently been some strong criticism of the agency and the Federal Government. Houston’s Mayor Bill White has voiced criticism with both the snail’s pace of government promised reimbursement of the city for out-of-city-pocket costs to get Houston and the region back to speed, as well as FEMA’s disaster aid stinginess, and requirements that hurricane victims instead seek help through a laborious Small Business Administration (SBA) loan process instead. In a nutshell, FEMA doesn’t want to hand out disaster assistance – they’d rather lend you the money to rebuild.

Additionally, Galveston’s residents and some city leaders are also upset with FEMA. To date, there are a large number of mobile homes ready for deploying and sitting in storage in Mississippi, yet few if any have been delivered to and established in Ike-ravaged Galveston and other coastal areas here. The double standard between the post-Katrina response with housing, and the post-Ike response are too blatant to be ignored. Meanwhile, many of Galveston’s residents not getting emergency housing assistance are living in tents, makeshift shelters, even one man lives in his trailer park’s laundry room.

Just three days ago, FEMA announced that people in Galveston – mostly indigent – that are being housed in motels or other temporary emergency housing would be asked to leave. Many families living in hotels learned of the FEMA cutoff from fliers slipped under their doors. Many of them have nowhere else to go.

“We can't get leases for three months,'' Mayor White added at a City Council meeting. ''Landlords won't do that.'' He called the directive absurd and added, ''I'm sure they'll change that today.” Well, they didn’t. The edict is going ahead, likely necessary due to the government’s tight purse strings in light of the recent Wall Street bailout. Those newly evicted, former hotel-boarded residents are vowing to return to Galveston and live in their cars parked along the city’s seawall in both protest and utter frustration, having nowhere else to go.

This of course comes as the northers have begun blowing through, putting everyone in the instinct (if not the mood) of the coming Thanksgiving and Christmas holidays. Economically, the region’s only bright spot was that Big Oil had been immune to the Bush “Economic Recovery” that has hammered the rest of the nation’s budgets. On Sept. 22, 2008, oil stood at $122.61 a barrel. Friday, Nov. 14, the same barrel was $55.95. The same station I bought gas at immediately before the storm (thinking it was a good deal, even) was at $3.82 per gallon. Today it is $1.79.

Needless to say, the job drought is starting to migrate to Houston for this economic winter. Just recently the news warned that Houston could see a loss of 15,000 jobs next year. 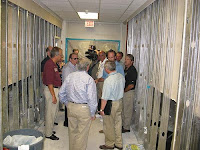 As if that’s not bad enough, Galveston’s University of Texas Medical Branch (UTMB) – the largest hospital on the island – announced that they must shed 3,800 jobs due to declining revenue. UTMB is the largest employer in economically challenged Galveston.

While there were promises of reimbursement for those temporarily unemployed due to Hurricane Ike’s workplace closures, I personally filed, had difficulties getting the information adequately explained to the Texas Workforce Commission, and even to this date – two months later – have yet to see a penny for the week I was out of work due to the storm.

As of Halloween, I’m now truly unemployed full-time as well. My job – with a Big Oil giant – was complete and my position has henceforth moved to Chennai, India. Trick or Treat!

And for the Houston / Galveston region, in the wake of Hurricane Ike, it’s Seasons Greetings as well. Along with the storm recovery, the Bush neo-conservatives’ Economy Recovery grinches have come to stay. We’re just one big happy!

“It’s never too late to say a prayer.
It might be all we got to share.
There’s always a hope that someone’s there.” — After The Storm, the Outfield
Posted by Vanessa E. Foster at 12:59 PM

What's amazing is how large and cutting was the devastation of New Orleans... Certainly the costliest hurricane ever. See here (tomorrow)...

Vanessa, I was glad to have stumbled across your posting, as I have been trying to find out the status of the people, towns, missing, jobless in the 2 months since Ike. I am in Wisconsin, and I am very displeased with the way Texas, in the aftermath of Ike, seems to have been forgotten. Do you know of any site that is set up that is keeping information up to date?

Hey Mark, I'm not taking anything away from the devastation of New Orleans. It's clear there's no comparison on a damage-extent level. However the response here has been quite different, even with the pathetic delays New Orleans suffered. They're still not addressing things adequately here -- it's been nothing but a sick ruse.

And Belle, to my knowledge I don't think there is a site on that. Mostly, it's just a series of bloggers such as myself who are keeping up with this.

If you don't get extensive media coverage, nothing moves. typical