You Can Marry, But You Can't Work

"I look at you and see the passion eyes of May.
Oh, but am I ever gonna see my wedding day?" — Wedding Bell Blues, Fifth Dimension

Said New Hampshire's favorite gay son, Bishop V. Eugene Robinson, "It's about being recognized as whole people and whole citizens. There are a lot of people standing here who when we grew up could not have imagined this," Robinson said. "You can't imagine something that is simply impossible. It's happened, in our lifetimes."

So now we have yet another state that allows gay and lesbian couples, and even transgenders, to marry on January 1, 2010. You can bet there will be couples lined up taking advantage of the new law on New Years morning! 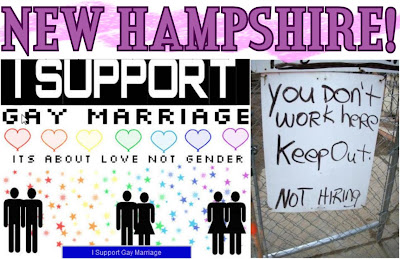 However if you're transgender, you won't be able to work. Like Massachusetts or Connecticut, you can only marry but still be fired for being who you are. As Bishop Robinson said, you're whole people, whole citizens – just not free to work in the Live Free Or Die state. And no, if you have no ability to be hired and end up homeless, you can't live FOR free there. Of course you do have the right to die there and they likely won't have much problem with that. It's the latter option in their motto, and we trans people certainly aren't free to work in New Hampshire.

For trans Americans (unless you live under a rock), we remember the recent New Hampshire senate vote on Trans employment non discrimination. Zero to 24 – we were absolutely shut out! That spoke volumes!

In discussing how marriage will affect the New Hampshire primaries in 2012, an Associated Press article noted it was likely to have an affect in that state's election dialogue. They note that in New Hampshire, Republicans tend to be more fiscally conservative and socially moderate.

That's rather interesting. It also flies in the face of recent reality, where Republicans defeated trans employment non discrimination by forcing a new name upon it: "the Bathroom bill."

Now I ask: does that sound like New Hampshire Republicans are socially moderate? Do you believe social issues never really play a major role there?

Yet even in hard-ass, conservative places like New Hampshire where they still openly play trans people as perverted freaks lurking around bathrooms, same-sex marriage is now legal. Six years ago marriage wasn't even on the radar. Employment non discrimination, which has been worked on for over 15 years is not a reality.

On employment, we in the Trans community are actually a bit worse off than we were when the marriage fight began. Not only are employment rights stalling, but bathroom issues and freakish caricatures of society's phobias about trans people are becoming more common in even the halls of government.

That's to say nothing of the increased difficulties in trans people getting jobs in the first place! Unlike gays and lesbians, when trans people transition we face the no-match problems with Social Security and other complications thanks to the Real I.D. Act. Blogger Marti Abernathey pointed this out in her TransAdvocate blog recently [http://www.transadvocate.com/no-match-no-job-no-surgery.htm]

I always thought when I got my documentation changed, I transitioned, and was passable, that I'd be able to live the nice normal life I did before transition. It hasn't quite worked out that way. Recently I was interviewed a few times and offered a job... and then I got that dreaded call.

"Marti, we were doing our normal background check and we have a problem. We keep getting a rejection with your gender."

I had to tell my potential future employer that I am a pre-operative transsexual.

It must be said that Marti lives in Wisconsin, the first state in the union to enact employment non discrimination for sexual orientation, and one that still has no such protection for trans folk like her.

Worse still, I live in good-old-boy, rednecked, so-arch-conservative-that-fascists-are-bleeding-heart-liberals Texas. My last permanant job was in 2002 with only a patchwork of temporary jobs since. Imagine the prospects for trans people in the southern tier of states.

Even if states like Wisconsin or Texas or any others newly enact non discrimination laws, it's not like marriage where folks line up and immediately take advantage of the new law. Marriage happens immediately upon the day it goes into effect.

Employment, especially for trans people who are still lagging far behind on being known and understood, it may be months, a year or years after before an employer hires trans people. So, when have we seen anyone in the gay and lesbian leadership or media prioritize employment recently?

Yes, we did have a big stink raised over President Barack Obama not nominating an "out" gay or lesbian to his cabinet yet. He's only hired 31 gays or lesbians to various staff positions that apparently aren't considered key or high-profile positions. But that's a very limited employment opportunity scope. And it's also for "high-ranking" and "respected" and "openly" gay White House staffer, per Charles Socarides May 1, 2009 article in the Washington Post.

To Socarides' credit though, he did also mention need for an "omnibus federal gay civil rights legislation, similar to the Civil Rights Act of 1964, outlawing discrimination based on sexual orientation." (Yeah, I know ... nothing in there that effects trans.)

But that's been about the extent of it on employment.

As for now I keep getting more stories from my friends of their lost jobs, their vastly reduced hours or income, the long-term-with-no-end-in-sight unemployment (not unlike my own!) and folks on the edge of going homeless. I've lost touch with at least one who likely has now gone homeless: another blip that stops pulsing on the radar screen.

Meanwhile, we have the right to marry who we wish in New Hampshire. That's important.

I only wish it were as important for trans people to live. Live Free ... or ... Die. Indeed.

"A lot of New Hampshire families have come to know people in their families who are gay -- co-workers, former classmates – and that's what really made this difference. We are no longer talking about an issue. We are talking about people." — Bishop V. Eugene Robinson

"To have no job is to have no pride. You're nobody. Where do you go? There's nothing...." — unidentified former professional man interviewed in a homeless encampment in Florida.
Posted by Vanessa E. Foster at 5:13 AM

The same thing is shaping up to happening in New York State. I have to wonder if inclusive nondiscrimination law will ever be passed once the GLB community get their pet issue passed into law. I'm not really hopeful it will ever happen now.

The transpeeps in Wisconsin have been waiting for almost 30 years...

Yes I do agree that we should have protections, but more important, all people should be protected which is still not the case.

Great article, Vanessa. You read my mind. It is so frustrating to hear about marriage here in NY when I know that we are just getting the boot on GENDA -- AGAIN. It's shameful that SONDA happened in the first place. Incrementalism clearly doesn't work and survival of our community members must come before relationship recognition. Sons and Daughters of Sylvia Unite!