Who Cares About The Stonewall Girls (And Guys)?


"The crowd began to get out of hand, eye witnesses said. Then, without warning, Queen Power exploded with all the fury of a gay atomic bomb. Queens, princesses and ladies-in-waiting began hurling anything they could get their polished, manicured fingernails on. Bobby pins, compacts, curlers, lipstick tubes and other femme fatale missiles were flying in the direction of the cops. The war was on. The lilies of the valley had become carnivorous jungle plants." — Jerry Lisker, from the New York Daily News, July 6, 1969

As the LGBT community been enrapt in Pride celebrations in numerous cities across the globe this month, there's been plenty of news that's hit the wires. Most all of it in America has centered around Don't Ask, Don't Tell (a campaign promise by President Barack Obama that has yet to be addressed) and marriage issues or the Dept. of Justice's recent amicus curiae brief filed regarding DOMA (the Defense Of Marriage Act of 1996).

Individual organizers in the GLBT community are using this anniversary and devoting media to capitalize on the event to address the recent outrages in the gay and lesbian community.

It's a notable anniversary for Pride celebrations and marches this month as it is the 40th anniversary of the Stonewall Rebellion. That occasion was also about outrage. The folks that night had had enough of being treated like crap. No más!

"If the police came in, they were going to check your ID, rough-up some people. The drag queens always seemed to get roughed-up first." — Larry Stansbury of Capital Pride.

Today, of course, those surviving veterans of Stonewall are all near, or in their sixties or above. They still remember that night well. And though this is a milestone anniversary, there appears to be a collective yawn in this country at least in recalling our history and having these pioneers of Queer history around for the retelling.

Odd. We want to revel in this special anniversary with parades and parties and such. Yet the organizers and perhaps a sizable portion of at least the gay and lesbian community would rather just forget what this date memorializes or the people who created the flashpoint on June 28, 1969.

"We've had all we can take from the Gestapo," the spokesman, or spokeswoman, continued. "We're putting our foot down once and for all." The foot wore a spiked heel. — excerpted from the New York Daily News, July 6, 1969

"[Stonewall Inn] catered largely to a group of people who are not welcome in, or cannot afford, other places of homosexual social gathering.... The Stonewall became home to these kids. When it was raided, they fought for it. That, and the fact that they had nothing to lose other than the most tolerant and broadminded gay place in town, explains why [riots occurred]." — Mattachine Society Newsletter, Aug. 1969 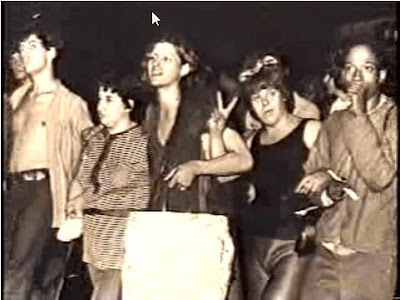 We currently have two or three trans members of the Stonewall Girls, those who began the protests that night, that live out in California. I've been in touch with one of them, Miss Major, and in touch with mutual friends with the others about marching with the trans community in the Sons & Daughters of Sylvia Rivera entry in New York. She was definitely interested in attending, but finances was the prime obstacle. At one point in frustration, she wrote:

I am hoping against the reality that the gay community will get off it's ass & do the right thing by the girls that are still here from the 1969! The shit stops here. (The) riot at Stonewall – when you think about it – that was 40 years ago. If you can add, that makes us elders, ones that need the respect for what we began and for living with the bullshit they throw at at us.... WE ARE STILL HERE, DAMNIT!!!

We are not going to disappear or fade away. I have no closet to hide in – I burned the house to the ground. NO HIDING PLACES.

I had to remind her that this wasn't being organized by the Pride or any gay/lesbian orgs, but was being done by trans folks, thus the lack of funding, etc. It wasn't without inquiring though. When the issue was brought to the Heritage of Pride organization in New York, they stated they had no money and added they weren't so keen on inviting more Stonewall rioters in. The Stonewall Veterans Association they already had marching tended to be "demanding" and generally a pain to deal with.

For Miss Major it was all for naught as she ended up twisting her ankle. But at least one of the other girls in Los Angeles that she had spoken with wanted nothing to do with Pride, the March, Stonewall or any of it. As Miss Major related it, she said "she was tired of us being shit on. All (Pride, Stonewall) did was bring back bad memories of how we got screwed over and shoved to the back of the bus."

We've got a gay Stonewall vet here in Houston, whose interview I reprinted in a recent blog. There's been a little interest on Big Roy McCarthy again, mostly from out of the country – the article will be translated into Danish and reprinted there on the anniversary of the beginning of the Stonewall Riots. Not only is he not getting interest in New York, even Houston's giving a collective yawn. Big Roy's not their idea of an attractive spokesmodel.

"Screaming queens forming chorus lines and kicking went against everything that I wanted people to think about homosexuals ... that we were a bunch of drag queens in the Village acting disorderly and tacky and cheap." — gay activist, Randolfe Wicker

In another ten years we'll see the fiftieth anniversary of Stonewall. Perhaps that will draw more interest in the folks who were there that night inciting the one catalytic moment in our community's history which is remembered around the world. Or perhaps, since these instigators were trans, drag queens, street hustlers, mostly people of color, and also those white trash rioters too. Perhaps that memory's one that the modern-day movement of the HRCs and the NGLTFs and the like doesn't want to face. Perhaps that's been the plan since shortly after the riots finished.

The Stonewall Girls and Guys? They virtually all feel they've been co-opted and tossed away by the modern day movement like a used condom. 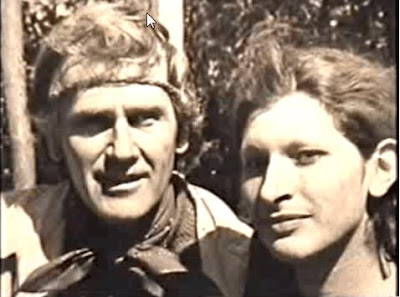 We march in the Parade and point to the history of Stonewall. But simultaneously there's no sense that anyone wants to know or to remember the community's warriors or even know the history of that night.

People want to mouth the words "Stonewall" as it's become only an occasion in which to party. Unfortunately there will be no lessons learned from it. In Twitter-ese, time to bring out the Fail Whale.

"I had been in enough riots to know the fun was over. The cops were totally humiliated. This never, ever happened. They were angrier than I guess they had ever been, because everybody else had rioted, but the fairies were not supposed to riot, no group had ever forced cops to retreat before, so the anger was just enormous. I mean, they wanted to kill.” — gay activist and "father" of the Stonewall movement, Bob Kohler
Posted by Vanessa E. Foster at 8:16 PM

40 years later Randy Wicker now thinks of himself as a "transgender" but remains as utterly clueless about the lives of women of transsexual history as ever.

thanks for keeping it real Vanessa - sometimes i wonder if the elders have not actually failed our youth somehow - these pride events were never supposed to be parties. They were always demonstrations. Thank you for the re counting of history through these quotes - who ever controls history ...you know that saying ...its important we educate the lgb never to forget the T. It doesn't surprise me that this would happen America in general has an attention span of a nano second - In Tom Brokows "comprehensive" book on the 60's he never even touch on the gay movement - let alone who it is truly made of. They would prefer we all dissapeared - but newsflash we're not - nope.

We are only growing angrier. Kids these days are impatient , now if we could just figure out a way not to encourage the apparatus of ignorance and hate otherwise known as our government...