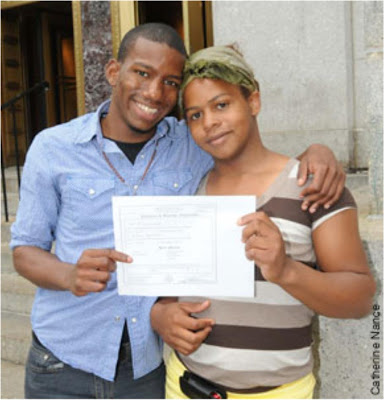 "That's great, it starts with an earthquake,
Birds and snakes, and aeroplanes -
Lenny Bruce is not afraid.
Eye of a hurricane, listen to yourself churn,
world serves its own needs, satisfy your own greed." — It's The End Of The World As We Know It, R.E.M.

The world ended in New York State on May 26, 2009. Or it least it should have. The AFA and the FOF and the NOM and all of those right-wingy, cover-your-thingy, religiopolitical fundamentalist orgs had long worried about the fabric of society suddenly disintegrating if ever a same-sex marriage occurred in a state where it was outlawed.

Well it happened! After the state of New York went through court same-sex marriage occurred!

So, how is life in post-apocalyptic New York? Hmm ... funny thing is it's still there! And life is going on as normal (there's that *word*!) I talked with a friend up there ... no big changes ... just an ordinary June day. No big bang, no anarchy? I guess I should be disappointed, huh?

In fact, the news media didn't even pick up on it until today's New York Post broke it this morning! And still everything's functioning! That's gotta be breaking some stony little religiopolitical hearts.

Here's the real kick in the crotch! As much as it's been a major wet dream for the gay and lesbian community these past years to be able to marry ... it was a trans woman and her husband who tied the knot! That's okay, though. They'll be buried in the annals of history with nary a memory. (It's the way things work in GLBT ... history must be by G or L – they'll see to it.)

Hakim Nelson and Jason Stenson married on May 26 with nary a raised eyebrow among the oblivious city bureaucrats who not only OK'd the marriage license, but conducted the ceremony, despite gay marriage being illegal in the state.

The plucky couple filled out their marriage application online at the Apple Store on 14th Street in May. A few days later, they went to the City Clerk's Office on Worth Street to complete the form and get their marriage license. [...]

The gullible clerk didn't seem to notice that both Nelson, 18, and Stenson, 21, have male first names. They both had to present identification to obtain the license. Stenson used his state ID card, and Nelson gave a state Benefit Card, which he uses to collect food stamps.

By a fluke, Nelson's ID card has an "F" for female on it, because the official who issued it in April assumed from his appearance that he was a woman. 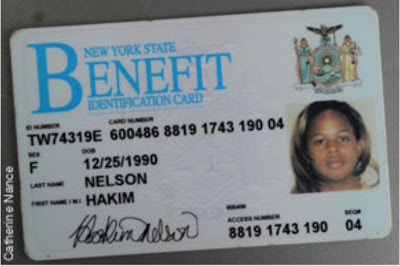 Government issued I.D. in the gender she presents, female. Yet the courts want to consider her male in some states. As a result of this paranoid thrashing attempt at social engineering by the religiopoliticos, they've actually created more problems. States like Texas and Kansas consider post-operative transsexuals their birth gender, and perhaps New York currently intends the same. But if this couple goes across the river with their fresh new marriage license, legally married in a state that doesn't recognize same-sex marriage, the state of New Jersey will honor her marriage to her spouse, especially post-surgically.

And beyond all the gnashing of teeth and protests and blitzkriegs on statehouses around the country, what exactly is being hurt by this marriage beyond some peoples' feelings? There have been, however one wishes to slice it, same-sex marriages per some states' opinions for decades and decades! It's only now that it's a hot-button to keep "the gay agenda" in check that it's been moved to the fore.

In these times with foreclosures and destitution rising like bread dough, jobs disappearing like moderates from the GOP, and Kim Jung Il threatening nuclear annihilation to all (and to all a good night), very few people have enough spare time in their over-stressed lives to pay much attention to a same-sex couple getting married. They don't like the overpoliticizing and street-protest whiners, but bottom line is that if it happens, 99% of Americans are going to shrug and go, "whatever! It's not my problem! I got crap of my own to deal with!"

Crap like how to survive this corporate-induced economic Chernobyl we're in!

“This is exactly what the right wing is afraid of. People have had a year of legal marriage in Massachusetts to see how ending marriage discrimination helps gay and lesbian families and hurts no one.” — Exec. Dir, Freedom To Marry Coalition, Evan Wolfson

Congratulations to the new Mr. & Mrs. Stenson! Now move across the river to Jersey, settle down, have a nice life and leave the battlers behind to fight amongst themselves. It's official: New York state has married (per its estimation) a same-sex couple, and the world didn't come to a calamitous end!

So, New York legislature ... how about take a clue here? Just pass the damn thing.

Ultimately there's no equal reason to not extend everyone the same rights. Marriage has happened in five states now (and a sixth in January), including all of your neighbors adjacent to your eastern border have it. Their world didn't come to an end. Moreover, continuing to hold up passage only sanctions unequal application of the marriage rights granted all your state's citizens. Do you really want to advertise that to the rest of the world?

Then once it's passed, maybe then – FINALLY – we can finally start employing trans people in large numbers in these so-called civil rights groups there in the Empire State and allowing them to make the connections, speak to the powers and enact legislation to where Trans people can work? Maybe even get some protections from hate violence too? Equanimity in sentencing for all victims' attackers, hmm? Hey, it's only been, like, fifteen years or so pushing for that stuff there, forty years after Stonewall and the Gay Rights movement.

One fact I forgot to mention: the newly married couple reside in Sylvia's Place at the MCCR Church in New York: a homeless shelter for Queer Youth. Yep, they married. They just can't work or make a livable wage to survive anywhere in the Big Apple. Get it?

But yeah, I know ... priorities. Survival subjects aren't sexy. They're just so hard to market ....

"Gay people want the freedom to marry for the same reasons non-gay people do.” — Exec. Dir. for Freedom To Marry Coalition, Evan Wolfson

"Transgenders already have legal same-sex marriage. Why then is the lesbian and gay community reluctant to use this as a wedge issue when lesbian and gay same-sex marriage is debated on the news, on talk shows, and in litigation? The reluctance is incomprehensible." — from the Albany Law Review, "Same-Sex Marriages Have Existed Legally In The United States For A Long Time Now by Phyllis Randolph Frye & Alyson Meiselman
Posted by Vanessa E. Foster at 6:48 PM

Texas OK'd my marriage to my husband this year. Of course we never really went out of our way to mention that I am a post operative transsexual woman, and all my paperwork is in order. We filled it all out at the desk with the clerk, paid our $71 and three weeks later returned to have the judge perform the wedding. After several weeks of nail-biting suspense the stamped copy of our license arrived in the mail & Texas is still in one piece!

How is your marriage going? Be honest…how is it ACTUALLY going?

If you’re reading this e-mail right now, then chances are your marriage isn’t what it used to be… and maybe it’s so bad, that you feel like your world is falling apart.

You feel like all the passion, the love, and romance have completely faded.

You feel like you and your wife can’t stop yelling at each other.

And maybe you feel that there’s almost nothing you can do to save your marriage, no matter how hard you try.

If you feel like your marriage is worth fighting for, then do yourself a favour and watch this quick video that will teach you everything you need to know about salvaging the most important thing in the world:

=>Save Your Marriage Now (VIDEO)<=

In this video, you’ll learn the three critical mistakes that most couples commit that rip marriages apart. Most couples will never learn how to fix these three simple mistakes.

So if you feel like your marriage is about to take its last few breaths, then I urge you to watch this quick video:

You’ve got nothing to lose.

PS. Just take 3 mins to watch the video.. if you don’t, you may miss the one tip that could save your marriage. Click here: =>Transform Your Marriage in Minutes<=

Are you looking for VIP escorts in Alwar? So spend time with your favorite call girls and hurry at cheap and good rates.Call Girls In Alwar

If you are looking for a good call girls in Gurgaon, then you have come to the right place, we can provide you call girls at a cheap and good rate, for this you can contact us on our web site or our number. Call Girls In Gurgaon With Photo

Are you looking for call girls, then we have a stock of escort agency, we have one to one female hot girls to provide 24/7 service to you and can be enjoyed by contacting our website.Cheap Call Girls In Neemrana

If you're searching for amazing fun for your mature desire, don't hesitate to contact us. Hello Visitor, we're thankful that you stop by our site. We provide Independent Escort in Agra companionship for the beautiful and welcoming women you can ever experience. We're proficient in supplying independent escorts proficient in gratifying men by kissing, massaging, and massaging their physique. Their figure is amazing, and you're able to enjoy the entire night.

What Is The Price Of Bitcoin In The USA?

It is the most repeated question that is asked by most investors. The Price Of Bitcoin varies according to demand and need. Now you can follow the steps to open your bitcoin account.

💲 Xanax 💲 Xanax A tablet that can be taken orally to treat SAD. Some people are dependent on this medication. Xanax Never have they been ill-treated with drugs before.