"God forbid, if my son put on a pair of high heels, I would probably hit him with one of my shoes.... You got a boy saying, ‘I wanna wear dresses.’ I’m going to look at him and go, ‘You know what? You’re a little idiot! You little dumbass! Look, you are a boy! Boys don’t wear dresses!’" — Arnie States from his morning show on KRXQ FM in Sacramento.

There's been a bit of a brouhaha over the comments made on a radio show out in Sacramento. Today's show's second half, as I listened in, had less of the more incendiary commentary of what was said the day before (at least until the end when Arnie, the resident peckerwood, saved it for a parting shot before leaving).

One thing the commenters of this type of speech are neglecting to see is the potential to foment such behavior and validate it by high-profile (presumed to be worthy) opinion-makers. All they do, per their own words, is offer their opinion (and in a country with free speech, that should be allowed.) However, they fail to see their profile and media prominence, with an absolute lack of a counterbalance type of show, only provides a broadcast-induced mantra to the public.

As long as opinion is just opinion, it's harmless. It's just that not all listeners happen to leave it as merely opinion. As witnessed over the Bush years, and really even going back to the Gingrich revolution, there is a group that feed off of this mob mentality and feels entitlement to take things a step further. America is all about standing out, being number one, being extreme. So what happens when someone takes an opinion and superimposes their own spin, their own magnnification of it tailored to the individual's own personal frustrations and agreement that "these weirdos" are the problem?

We just witnessed a taste of that with Scott Roeder's Sunday church service murder of Dr. George Tiller. Tiller, a controversial abortion doctor known in right-wing media, especially among folks like Bill O'Reilly, as "Dr. Tiller the Baby Killer" was a prime example of media's power to stir amok with some of its listenership's emotions. Roeder was the impressionable type to pick up on a lot of O'Reilly's commentary and, after feeling both frustrated and emboldened enough, acted out in pretty much a fashion that O'Reilly's words would indicate he approved, regardless of whatever explanation his post-facto sentiments may try to claim.

So what happens when parents who are discovering they are raising a child whose birth sex and innate gender are incongruous listen in on this Rob, Arnie & Dawn show? To her credit Dawn Rossi played the level-headed foil. But hearing Rob Williams or Arnie States talking about enforcing a hard line with discipline, hitting them with shoes, belittling them with terms like "freak" and "dumbass" or discussing their "disorders" mandating therapy while doing nothing at all to try to understand they've failed to grasp this condition only signals a green light to any other vulnerable parent of a trans child looking for an answer. With suggestions that hitting them with a shoe or the child needing a beat down, a few of their listeners may use this to validate exactly such behavior.

"You know, my favorite part about hearing these stories about the kids in high school, who the entire high school caters around, lets the boy wear the dress. I look forward to when they go out into society and society beats them down. And they end up in therapy." — Arnie States from his morning show on KRXQ FM in Sacramento.

And to the Arnies of the world, I'll let you know right now: you don't ever beat it out of the kid. Lived through that. It didn't work. You can certainly beat the kid, but the kid remains the same; just beaten. They'll just wait, as I did, until they're an adult and do what they feel anyway. It's like a kid who grows up in a liberal hippie household whose parents beat him for wanting to be a soldier or a capitalist or something more conservative. The kid will eventually grow up and be themselves anyway.

The Arnies want to be understood for who they are – they just don't want to understand others (like trans kids) for who they are. All that the Arnie-style parents will do is raise kids who feel their parents were selfish, obstinate and didn't ever respect or love them. They'll guarantee their child's resentment and mistrust! Perhaps that's a victory to some parents: if your kid doesn't grow up the way you want him or her to be, just toss them out. Who needs them? Perhaps that's what our disposable society produces: disposable kids.

My personal opinion of that style parenting is the stereotyped, peabrained, liquor-addled trailer trash parent. Throw the kid away like you'd throw away a bottle beer in the general direction of the trash can. Pick up and move your mobile home on wheels to a different lot, or hell, just buy a new one altogether – a double-wide! Why stick with something, eh?

More than the kids, though, what does that indicate of those type of parents?

Now some of the commentary Rob, Arnie & Dawn received from the community was unfortunate, and quite over the line. As I explained to them, though, it's likely indicative of similar but greater frustration to what some of their regular listeners feel. They gave back some of the more extreme commentary that they've experienced over time, giving them a vicarious sense of what years of Michael Savage, Bill O'Reilly, Peter LaBarbera and others have wrought. 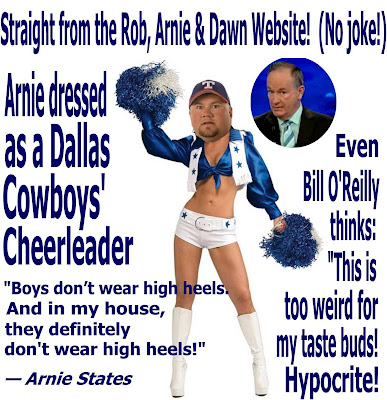 Yes, there should be free speech. But perhaps there should also be much more of the other side of this coin, and not just the inciteful and spiteful seeking what they feel is a feckless and defenseless target. They spent the morning show today belittling the gay spokesperson on FOX News for expressing his opinions, even if it was indicating he thought they should be taken off the air (which they won't). But neither Rob, Arnie nor Dawn realized he was similarly expressing his opinion! Really, when it boils down, even their extreme commenters ripping them up were expressing opinion as well.

So where is the arbitrary line crossed?

"[I'm] still saddened that people think it more important that their children conform to their preconceived notions rather than letting them be who they truly are." — Amy Guarr, mother of Ian, a transgender female-to-male teen who took his life shortly before graduation.

To be certain, as the show pointed out, transgenders are not the only people who suffer hate violence. However, we are targeted much more frequently than other groups. Therein lies the crux of the issue that this shows' hosts fail to, or refuse to grasp. The latter option is much more troubling.

Another point that Dawn rightly brought up is that the spokespeople who were on FOX or from GLAAD, speaking out loudest and maybe a bit more extreme in mainstream media against their show, were gay and lesbian – and that there was a difference between them and transgender. She noted how gay groups were trying to simply make the point and assist on the issue, but that it shouldn't automatically be attributed word-for-word to transgenders. She gets extra points for that (as many in the straight world have a bad habit of conflating one as being the other).

While we may have phrase things differently, it also points up the fact that we don't have our own organizations in media to speak to these issues. Nearly always it's a gay or lesbian leader from one of the established, funded and staffed organizations that makes the connection to media. And media, typically not knowing any better, usually believes it to be the trans community's choice, our voice, our words. Often times, it's not.

But we're left with that currently as we don't have the viable opportunities for our own voice as yet.

It was refreshing for someone outside of our greater Queer Community note that difference for once. Far too often in our own community, even we don't make those distinctions.

"Your children are not your children. They are the sons and daughters of Life's longing for itself. They came through you but not from you and though they are with you yet they belong not to you." — artist and writer, Khalil Gibran
Posted by Vanessa E. Foster at 12:49 PM

Ness, you point out one of the key reasons why I've been doing what I do for as long as I have, and why I'm constantly looking for ways to extend the reach of the media I create:

Because there's just not enough of us doing this, and those of us who do aren't yet recognized as equally credible by the MSM on our own issues to proven liars like Solmonese and the rest of the HRC Appletini crowd.

We have to keep speaking out and promoting our own takes on these issues to MSM because you can be sure that the MSM folks (and in many cases, even LGBT media) aren't going to bother taking the time to seek us out for comment.

To my way of thinking, this is the only way to truly have a voice that is our own. We must first get not only our views into the mainstream, but also the understanding that HRC and similar rich folks "activist" party clubs don't speak for us or for the vast majority of LGBT Americans anymore.