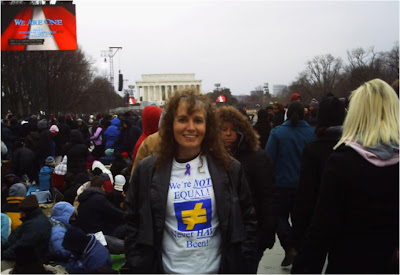 How many ways can you say cold? Well, I won’t bother trying to get flowery with my “speeching” – it was damn cold – at least for me with my thin South Texas blood! Yes I braved the weather and the phenomenal crowds to attend “We Are One” – the official opening performance of the Inaugural Period – in front of the Lincoln Memorial. 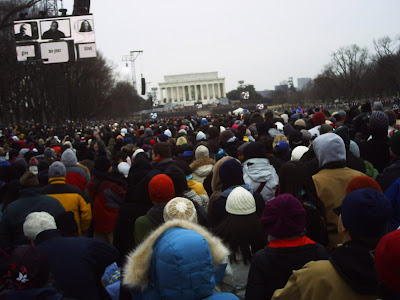 It was the perfect location for it (albeit, for me, a constant reminder of the temps as I was parked right next to a frozen reflecting pond!) Despite the temperature, the crowds were jovial and really into the moment. One of the big themes of the show and indeed the entire Obama Campaign was to not just think of yourself, but remember that we all must pitch in and help each other while we “make a more perfect union.” 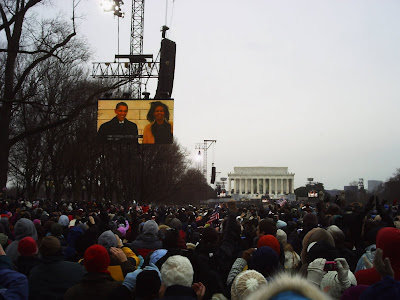 This was demonstrated by the folks I plopped next to, a couple originally from St. Paul, MN (although the husband works in DC now), who were there – like the rest of the crowd – bundled up like Eskimos against the elements, while I stood without the scarves and gloves and hats that seemed to be the fashion. The woman next to me took pity and lent me her thick pop-top glove / mittens to warm my frozen hands up (there was nothing I could do about my feet!)

Of course since I didn’t wear gloves most of the day, I had fingers free to snap photos of the gay couple standing next to me (who liked my “Un-Equal T-shirt!”) as well as others around me – including a group from Dayton, Ohio (who made the O-H … I-O with their hands, YMCA dance style)! After the picture, I told them I was part of the Obama Bus (Freedom Riders II?) who helped turned their town and county blue there in conservative southwest Ohio! I had fun connecting with Dayton folk again! 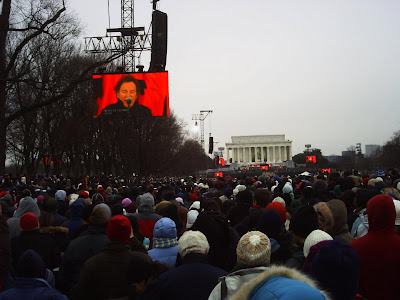 The concert was phenomenal: Bruce Springsteen opening up, with performances by Shakira, Usher & Stevie Wonder doing Stevie’s “Higher Ground”, John Legend & James Taylor (singing Taylor’s “Shower the People (with Love)”, Bettye Lavette & Jon BonJovi doing a duet, Sheryl Crow, Will.I.Am & Herbie Hancock, Jon Cougar Mellencamp doing his “Pink Houses,” and many other musical acts. The stand outs besides Mellencamp’s and Usher’s was a three-song performance by Garth Brooks(!) who had the entire crowd singing “American Pie” and the Isley Brothers’ “Shout,” and a performance by U2 of their “Pride” (honoring MLK’s life) and “City of Blinding Light,” which I believe is new – possibly written especially for this occasion. I loved the final lyrics of the song: “blessings are not just for those who kneel … luckily!” 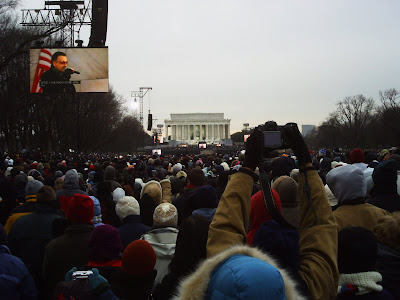 Of course the speakers themselves were wide ranging and entertaining, beginning with Bishop Gene Robinson’s invocation (it was good to see Rev. Gene give again!), Martin Luther King III, Queen Latifah, and even more comically lighter versions of most serious material: George Lopez, Jamie Foxx, Steve Carell, Cal Penn. Tom Hanks did a very stirring insight into the presidency of Abraham Lincoln in his monologue, with an unplifting orchestral backing of an Aaron Copland composition. 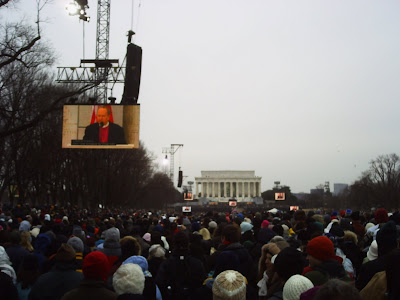 Walking out a little before the show ended I was stunned to see every inch of ground between the Lincoln Memorial and the Washington Monument packed with people! Even kids hanging in trees a half mile away, just to catch a glimpse of a Jumbotron of the performance – the sight of it all astonished me! Was this some kind of record for a gathering on the mall? It seemed to me to easily surpass six-figures in attendance! 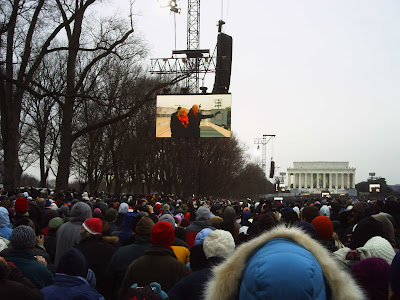 “We Are One” was a performance for the ages! For one, I’m glad I made it – frigidity and all!

“I am happy to join with you today in what will go down in history as the greatest demonstration for freedom in the history of our nation.” — Martin Luther King Jr. from the “I Have A Dream” speech.

After the concert, I got chance to touch base with an old friend living in DC – Jeffrey Braveheart. We hooked up as the crowds broke up, and headed uptown to find a bar to hoist a beer and have a toast – fitting end to an exciting day! 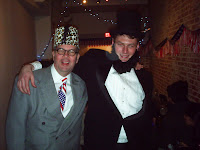 Afterwards, I rushed my butt back up to the far suburbs, changed into more appropriate evening wear, and went to the Warehouse Arts Complex across from the new Convention Center. They had an event – Obamarama – that was a series of performances in the theatre in back. It was an old-fashioned vaudeville and burlesque show, replete with women in pasties! Actually, it was done very tastefully as in the old 20’s era of strip-tease, replete with the ostrich feather fans and period costume. It was great fun as the MC’s and performers keep the crowd giggling and even participating in some of the action. At first I felt a bit unusually dressed with my beret, fishnets and more of a French look, but the crowd was also in various “fun dress,” including one man looking like he’d stepped out of a 40’s era Jimmy Cagney movie, another in a fez, and still another dressed as Abe Lincoln! (Hell, I even play wrestled with Honest Abe – go figure!) 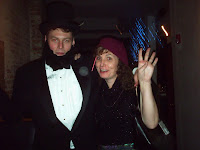 After drinking perhaps a bit too much of their mulled wine, I discovered the Metro was not running late on Sunday night! Yeeps! Catching a cab in downtown DC at almost 1AM is a very difficult process, and many of the cabbies refuse to take you outside of the district! I finally found one that did, and the trip cost a hefty $60, but I was safe back home. Lesson learned: verify the last runs of the DC Metro subways before leaving! 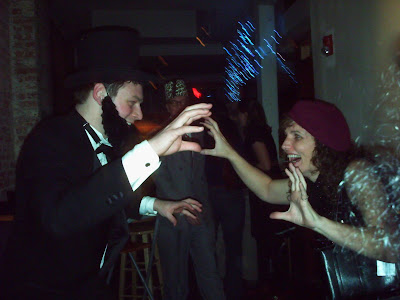 Well, today is MLK day, and I plan to watch the “I Have A Dream” speech on CNN later. Another note – startling for me, although pretty to see from inside warm environs – is that we were snowed on last night! Houston people are not snow people. I’ll see how I manage to get around today, but I’m not sitting on the ground like yesterday! Inauguration is going to be a challenge, I see. 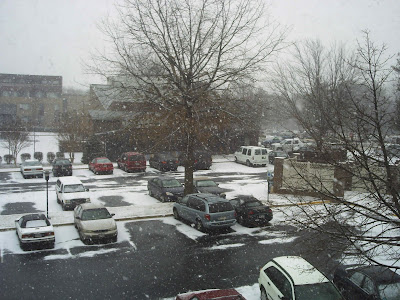 "Yikes! Snow! This wasn't in the forecast! How did I get into this?!?"

Either way, I’m here and enjoying being a part of this collective bit of history! Before I forget, Happy MLK Day everyone!

I have a dream today.

I have a dream that one day, down in Alabama, with its vicious racists, with its governor having his lips dripping with the words of interposition and nullification; one day right there in Alabama, little black boys and black girls will be able to join hands with little white boys and white girls as sisters and brothers.

I have a dream today.

And when this happens, when we allow freedom to ring, when we let it ring from every village and every hamlet, from every state and every city, we will be able to speed up that day when all of God's children, black men and white men, Jews and Gentiles, Protestants and Catholics, will be able to join hands and sing in the words of the old Negro spiritual, "Free at last! free at last! thank God Almighty, we are free at last!"” — Martin Luther King Jr.
Posted by Vanessa E. Foster at 10:37 AM

"City of Blinding Lights" has been out a while - it is on U2's 'How To Dismantle An Atomic Bomb." Reputedly, it is a selection Obama keeps on his mp3 player. Definitely one on of U2's better cuts.

Have fun. And get some gloves and a scarf. Gets cold at this latitude in January.