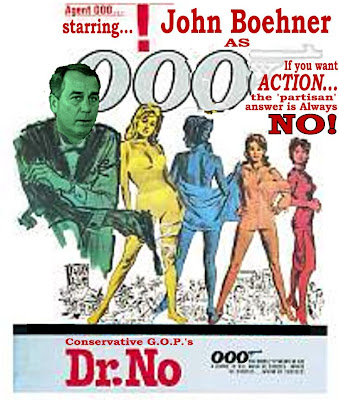 “All of those who feel their jobs are next on the cutting blocks, they need bold and decisive action now!" — Pres. Barack Obama

It’s time for America to once again embrace being “a nation of whiners” – at least the Republican ones. He may have used it to bash non-conservatives, but Phil Gramm (former of John McCain’s Presidential Campaign) uttered a phrase equally poignant for all.

As we speak, the House will shortly vote on the President’s Stimulus Plan. The President took time to visit for a second time the GOP leadership – matching Bush’s total meeting with opposition in his first term just in week one! And for all that, Republicans respect the President rhetorically, appreciated the visit, agreed they want to see America get better … and plan on voting against the President’s bill just because. They are Republicans, the others are not, and so they will bravely play down-the-line partisanship just because!

“If I wanted Obama to succeed, I'd be happy the Republicans have laid down. And I would be encouraging Republicans to lay down and support him…. I do not want the government in charge of all of these things. I don't want this to work…. I hope he fails.” — conservative talk-show host, Rush Limbaugh

Republicans in Congress are whining about the stimulus package not having enough tax cuts. Somehow or another, GOPer leaders like John “the TanMan” Boehner and Mitch “the Bitch” McConnell are twisting this stimulus from being about jobs creations and morphing it into a tax cut stimulus – and screw that jobs stuff! Further amazing is how they’re twisting this as being what President Obama has been pushing, ignoring all the rhetoric he’s been pushing about the unemployment hemorrhage and the desperate need for more jobs! To do so, they have to paint it as Nancy “the Nutcracker” Pelosi being the evil party by taking away their conservative manhood.

Some things that must be said to any of those who may be falling for this: tax cuts won’t create jobs, especially right now! None of the poor or working class will be spending these extra $10 or $20 in their paychecks on anything but helping pay their rent or utilities. Ditto with the majority of the middle class, who’s also been hurting throughout this decade.

So this leaves only the wealthy, a dwindling class themselves, who are scared of facing what the rest of us have lived with this millennium being called upon to go out and spend in numbers great enough to create jobs? Who do they think they’re kidding? The wealthy are going to do what they’ve always done: hold onto that extra money and look for a safe investment to plow their money into. In this day and age, where sales are falling everywhere because nobody in the U.S. has expendable income, that won’t be planted in factories producing things that can’t be afforded anyway! In these uncertain terms, that newfound capital will go into safer, conservative investments like bonds or commodities! Selling bonds or commodities produces virtually zero in the way of jobs.

In fact, after one week of the Obama Administration, not one tax has been raised. Yet we are still in the thrall of the Bush tax-cut era with plenty of tax giveaways. If tax cuts create jobs, then why did we lose 2.6 million jobs last year? Why is it we’ve lost nearly 100,000 this week alone? Tax cuts are still in place from the Bush and GOP-mandate era. So where’s the big job creation?

The only things that measurably increased are the incomes of the executive class and investor class. They’ve done well, and managed to get us into this Wall Street free fall while reaping increased paychecks and tax cuts hand-over-fist. Furthermore, we’ve just finished giving away $350 billion of future national debt to the banking industry that’s provided all these worthless investment opportunities that killed the stock market. And now that our tax money has made their firms flush with cash and the big, juicy bonuses have gone out to their high-rollers, we want to give them tax breaks on the taxpayer funded bonuses they just received?

Once again, how many jobs will this create? How will this get the lower 90’s of America working and spending again? Yep, you guessed it! It won’t!

Ultimately, this all has to do with Republicans needing to show their worth to their primary constituency: rich, white corporate folks. Do you really think GOPers are that concerned about pork and giveaways of large amounts of taxpayer cash? Does anyone remember the recent $350 billion given away to Wall Street banks which have produced … um … nothing!?! That giveaway was okay because it was going to the GOP base: the haves and have-mores.

This stimulus is going, primarily, to non-haves and have-mores – so this is why the stimulus must fail – not because it’s good for the country, but because it shows the GOP still remembers who they work for! Rich folks may be rich, but they still want more too – and will fight like demons to get it! Everyone thought Oxycontin-head Rush Limbaugh misspoke about “wanting Obama to fail.” It’s actually true. As long as America is led by Democrats, expect the GOP to throw every monkey wrench and every other tool in the toolbox in order to gum up the works.

If it’s not their glory and their folks’ profits, then they’ll make sure it can’t happen. Brace yourself America, now the Republicans are fine with letting the country tank! To prove their point, the Republicans have just voted unanimously along party lines to vote against Pres. Obama’s economic stimulus plan. Partisan discipline is now back in vogue. If the American economy suffers for the next four years, then that’s a beautiful day for the G.O.P.

"Just this week, we saw more people file for unemployment than at any time in the last 26 years, and experts agree that if nothing is done, the unemployment rate could reach double digits. If we do not act boldly and swiftly, a bad situation could become dramatically worse. " — Pres. Barack Obama
Posted by Vanessa E. Foster at 5:00 PM