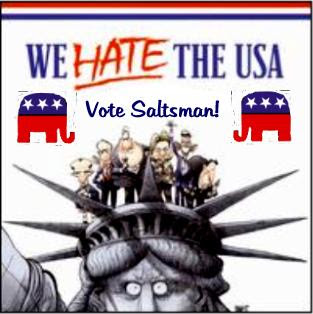 “’Cause there ain’t no doubt I love this land,
God bless the USA.” — I’m Proud To Be An American, Lee Greenwood

I figured that title would get your attention. It’s the actual title of the new CD compiled and sent out to all the Republican National Committee (RNC) members by Chip Saltsman – I’m not making this up. The 41 song CD entitled “We Hate The USA!” by conservative satirist Paul Shanklin, a personal friend of Saltsman, was intended as an enticement for voting for Saltsman as chair of the RNC.

Most controversial for the press has been the inclusion of a song called “Barack The Magic Negro.” It drew the expected protests from Democrats, and also some of Republican leadership. Said RNC Chair, Mike Duncan, who is seeking reelection to his post and move the party to attracting more minority voters: “I am shocked and appalled that anyone would think this is appropriate as it clearly does not move us in the right direction.”

Funny thing is, it appears to be helping Saltsman’s campaign. A number of RNC members are standing firm with him on his CD choice.

“When I found out what this was about I had to ask, ‘Boy, what’s the big deal here?’ because there wasn’t any.” said Mark Ellis, the chairman of the Maine Republican Party.

Alabama Republican Committeeman Paul Reynolds said the fact the Saltsman sent him a CD with the song on it “didn’t bother me one bit. Chip probably could have thought it through a bit more, but he was doing everyone a favor by giving us a gift.”

“No big deal” … it was “a gift.” Even if they wanted to disregard the racial implications in the Barack song, they really want to send out to their membership a CD entitled “We Hate The USA”? So this is what it’s come down to for the GOP, now?

Keep in mind these are the same GOP folks that focused intently on the comment “putting lipstick on a pig” by then candidate Obama on the campaign trail. The same GOP who said “words have meaning.” Also the same GOP who, during time of war, were quick to cast doubt on people’s patriotism if there was anything even remotely close to being less than fully supportive of the President or the United States in all its endeavors. Literally, people who made such off-handed comments earlier in the Bush presidency were called in for visits with the Secret Service or had FBI pay a visit to their homes, regardless of how sardonic or unserious the intent was.

Has that all been forgotten?

Now it’s all right for these same folks to make jokes about hating the United States? It’s frivolous to focus attention on a political party who once epitomized hyper-patriotism, and whose candidates now support such insouciant commentary about their homeland?

And that says nothing about the too-blatant-to-be-overlooked dual standards. Can you say “hypocrisy?”

In this time of war (remember guys, we still have two ongoing wars and even a new hotspot on the horizon with Gaza and Israel going at it!), and in this time of dire economic straits the likes of which we haven’t seen since the Great Depression, this CD sent to the RNC members is the message they want to send out to the party and the rest of the nation? I guess these times just aren’t serious enough to merit a serious level of attention from the GOP. They have no problem with their message, supporting the gift of “We Hate The USA!” CD.

Then good for you and Godspeed you Grand Old Party. Party on Garth …

One parting thought: the Patriot Act that was enacted by George W. Bush and Dick Cheney … that’s still in effect. Remember all the stuff in there about taking commentary against our country and our president seriously? All the people who were brought in and questioned to see whether they were benign threats or something more serious? I’m sure many of them just thought they were joking too ….