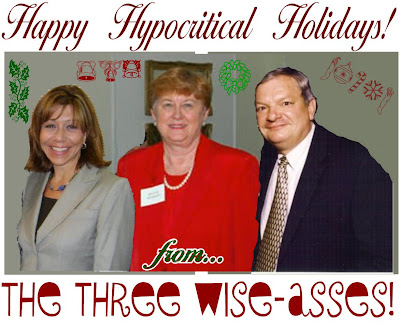 Last night was rather depressing due to the results of Senate District 17. Republican Joan Huffman, a criminal court judge proud of her death penalty sentences has become the new senator. She’ll be a great representative for religiopolitics, for corporate America and the wealthy. Woe be it for the rest of us – hubris is back in vogue.

Huffman won based upon one point: “my opponent is a registered lobbyist.” Apparently though, Huffman doesn’t pay very close attention to recent happenings. I would think that might be a bit problematic, except that this is Texas, where people revere the King of Clueless, He who never watches news or reads, our own homestate-reared Bush-baby. It seems though that Huffy Huffman overlooked one recent point: the election of a new Republican to replace Democrat Nick Lampson in U.S. Congress District 22 with Republican Pete Olson, a registered federal lobbyist.

Either that, or Republicans are enrapt with double-standards: one judgment on the rest of society’s transgressions, and irreproachability on their own similar bad acts. In short, if you’re a registered lobbyist, Republican = good, Democrat = bad. What a Pavlovian world we live in here in red-meat Texas, where every time you see an R next to the name, you mindlessly click the box next to that candidate’s name. If Osama Bin Laden just cleaned himself up, spewed some intolerance and pro-business rhetoric and lied about being a devout Christian, he could win a GOP nomination and an election with an R next to his name. (Think about it, Big O!)

“God is love. I have loved. Therefore, I will go to heaven.” — Imelda Marcos

In visiting with folks at the Chris Bell post-election party, I happened to eavesdrop on a conversation with Alison Bell (Chris’ wife) about running across our (Harris) County Clerk, Beverly Kaufman at an event. “Why are you being such a pain in the ass?” she blurted to Chris as they crossed paths. The comment was in context of Chris noting there were limited hours and few early voting locations in our county. When Chris explained he was trying to be, our County Clerk gave a drippingly snide response and walked back to hold court with Paul Bettencourt (our recently-resigned, controversial County Taxman).

Mme. County Clerk (aka “Ms. Pain-In-The-Ass”) was no help to the voters though. Being from one of the earliest and largest democratic precincts in far West Houston, I’ve noticed a distinct pattern of moving our voting location to different spots. This time, Ms. Pain-In-The-Ass moved our voting location two miles away to a spot where no one in the precinct would even think of going, to a voting location where the listed street address is to a guard shack! That’s right, it’s a private neighborhood at 12800 Briar Forest called Stonehenge … but the only thing at that address is a guard shack. To get to the actual club house, one had to turn on Wellington Arch Drive, go a block and turn left on Wells Heather Street and the club house was on the right side. Not on Briar Forest!

Gotta hand it to Republicans, they know how to play the sublime manipulation game like a Stradivarius! And yes, we Dems in my precinct got played! The precinct immediately adjacent to us on the east has a voting location right on the bordering road on our east side – prominent, easy to find, plenty of room and parking and also an elementary school that all the parents of young children take their kids to! And since we’re a democratic precinct in a county with a GOP County Clerk, it’s guaranteed our precinct will never be doubled up there! Ms. Pain-In-The-Ass would have it no other way! Too non-partisan!

“It is only through labor and painful effort, by grim energy and resolute courage, that we move on to better things.” — Theodore Roosevelt

One last note on our now-senator, Huffy Huffman: she apparently hosted, along with one of our County Commisioners, a barbecue luncheon for voters on Dec. 11 inside the Tracey Gee Community Center in far west Houston. Let me repeat for emphasis *inside the Tracey Gee Center on Dec. 11*! The reason for the emphasis is it is an early voting location! The actual voting in her state Senate election was taking place that same day in another room inside the same building.

Under state law, it is a Class C misdemeanor, punishable by a fine of up to $500, to campaign for or against a candidate "within 100 feet of an outside door through which a voter may enter the building in which a polling place is located." This Huffy luncheon was not only within 100 feet of the outside door – it was inside the building! Less than 100 feet from the actual voting machines themselves! Of course, Huffman can’t be expected to know all our state’s laws … as her previous job was as a felony court judge! Part of her election spiel was that she was proud of her conviction record on lawbreakers!

Further more amazing, our precinct’s County Commissioner Steve Radack (you guessed it! a Republican) admitted he attended the luncheon along with Huffman and urged people to vote for her. Inside the voting location premises! And nobody said “boo” about it! Yeah, I get it now … laws are only for Democrats or any other non-Republicans types to adhere to. If you’re part of the GOP, you get a wholly different set of laws (basically, none!) to follow. And make sure to throw the book at all lawbreakers, right? Nudge. Wink.

This complete disregard for code of laws should outrage people. This should be scandalous, and prominently displayed on the news (save for their need for advertising from companies always owned by … GOPers!). These over-bred neo-cons should be living under a cloud of constant suspicion based on their disregard for any sense of propriety.

Seriously, Big O … you ought to think about a political makeover. Your family’s friends with the Bush family, good family connections there! And the GOP’s desperately looking for a non-white face to play to the TV cameras who’s eager to “say the right thing!” Think of it: O. Ben Laden for Congress. You got spare time … Bush-baby now has spare time … let’s tawk!

“Politics is too partisan, and sometimes patriotism is cast aside. Patriotism is honor and love of your country and your brothers and sisters. With politics I get the impression that it's all about what's good for the party and not necessarily what's good for the country.” — actor, Ricardo Montalban
Posted by Vanessa E. Foster at 11:02 AM