Holly Or Jolly, Happy Or Merry, A Lighter Or Darker Xmas Mood 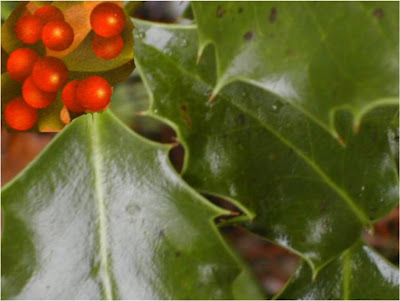 Well, I made a couple people cry with my last blog. So I suck on the “holiday cheer” department. Sue me! Either way, I guess I can try to find something to balance it out a little … something to elicit a little chuckle (even if it has to be dark humor to do so.) Maybe that’s what “holly jolly” is – darkly happy Xmas. Those little bushes aren’t very cuddly with their thorny leaves and poisonous berries. Ah I don’t know, I’m not the expert.

“Ma ma mamacita! ¿Donde esta Santa Cliz,
The vato with the bony knees?
He comin’ down the street with no shoes on his feet ….” Santa Claus And His Old Lady, Cheech & Chong

An eighteen year-old in California was arrested for sitting on Santa’s lap and flashing gang signs while getting his photograph taken! He was apparently on probation, terms of which prohibited him from communicating with his gang (which included flashing gang signs). Police arrested him after seeing his photo with Santa on his keychain! True! There’s so many things wrong with this I can’t even begin! What the hell was an eighteen year old doing sitting on Santa Claus’ lap for a photograph?!? Much less having the photo on his keychain? Was he was driving around with that? He’s a gangbanger, and he’s still alive after that?

“Father Christmas, give us your money!
We got no time for your silly toys!
We’ll beat you up if you don’t hand it over!
Give all the toys to the little rich boys!” — Father Christmas, the Kinks

When I was eleven, my dad and mom took the all four of us to Woolco in Corpus to do the Santa thing (even though I was years beyond that by then.) They made me and my brother go up and stand next to Santa while my sisters sat on his lap for the photo! Why not knock my teeth out with a hammer? I wish my dad would’ve been sober enough to snap to reality! Worse, other kids from school saw it while they were hanging out in front of the store. Next Monday, sure enough, Gilberto and Carlos jumped my butt over it – merry kick ass! It wasn’t even junior high! How does a gangbanger who’s old enough to graduate high school do that? And why? How high do you have to be to do that?

This has been a season of weird, if not necessary mirthful. But in these down times, I suppose you have to look hard and find amusement wherever you can.

A news blurb said Japan’s Justice Ministry reported that elderly Japanese, beset by economic worries and loneliness, are turning to petty crime in increasing numbers. Thefts such as shoplifting and pick-pocketing were the main offenses.

It’s stark contrast to the stereotype we used to hold of Japan 20 years ago of a very disciplined, economically successful, and unfailingly genteel society free from crime. Now grandma’s picking pockets in Tokyo? Visions of folks dressed in kabuki with those oversized sleeves come to mind – you can stuff a lot up those sleeves! I’d worried about those things happening here in the U.S. with our recent economic collapse – but in Japan? This isn’t funny really, just astonishing.

When Martha Raddatz interviewed George W. Bush recently, it was good for a few more belly laughs! Raddatz asked the Bush-Baby about the Iraqi reporter who threw a shoe: “I don't know what his beef is. But whatever it is I'm sure somebody will hear it.” This guy just does not get it – he’s off in sugar-plum land.

When asked about his decision to enter into the Iraq War, Bush said “This is where al Qaeda said they were going to take their stand. When Raddatz, reminded the President that was not until after the U.S. invaded, Bush responded: “Yeah, that's right. So what?” In essence, Bush didn’t have a reason to go into Iraq before it!

“The point is that al Qaeda said they're going to take a stand. Well, first of all in the post-9/11 environment Saddam Hussein posed a threat. And then upon removal, al Qaeda decides to take a stand.”

“I have never claimed like some said that [Saddam Hussein] – you know, oh, that he was directly involved with the attacks on 9/11, but he did support terrorists.” Ha! He doesn’t even remember what he’s said! This is way beyond even Ronald Reagan’s memory blanks!

“And, uh, Saddam Hussein had the capability making weapons of mass destruction. I did not have the luxury of knowing he did not have them.” Certainly Bush-Baby never knew we had one of our own, Gen. Scott Ritter, as one of the weapons inspectors. The good general, a self-described “hawkish Republican” could’ve told him! Apparently the Bush Admin was unaware! Is that a hoot? “And finally we gave Hussein a peaceful way out.” Omigod he cracks me up! Seriously, Bush has found his niche – stand up comedy!

“And do I wish we had brought Osama bin Laden to justice? Sure. But he's not leading a lot of parades these days.” I can’t make this stuff up, hahaha! Bin Laden’s frequent parades – now that’s reason to go to war!

The quote alone was enough of a knee slapper … but it was in context to Cheney’s quote to Chris Wallace that he did tell Sen. Patrick Leahy to “go fuck yourself” and that he felt Leahy “merited it at the time.” Kristol literelly gushed that it was “a beautiful statement, really, of sort of justice, you know? You know, people should get what they deserve….” This grinning assface cracks me up! Somehow the neo-cons failed to the get the memo notifying them that we haven’t all been lobotomized nor hypnotized yet – they’re clueless about how clueless they are to the world! But I agree with neocon-man Billy Kristol on one thing, though: people *should* get what they deserve! And we can’t wait!

“'Twas the night before Christmas, and all through the street
The markets were shut. The traders asleep.
The chieftains were gone, off to sun or to ski.
Each grateful, this year, that they were still home free.
Some moguls were resting, snug and safe in their beds,
Awaiting, with dread, the next move by the Feds.
And investors just sighed, resigned to their fate.
Once again Wall Street left less on their Christmas plate.” — 'Twas The Night Before Christmas-On Wall Street by Dustin Zahrt

Christmas is bonus time on Wall Street and its international counterparts, where they tote up and compensate for all the deals made over the past year. These can reach 10 or 15 times their generous annual salary. This year, Credit Suisse (CS) announced that it would pay its bankers up to 80 percent of their 2008 year-end bonuses in the form of what The Wall Street Journal called "an illiquid group of junk bonds, mortgage-backed securities and corporate loans" instead of cash or stock, as had been the norm throughout the industry. CS effectively told its bankers that instead of cash or stock, they would get paid in kind – the same kind of over-leveraged, securitized paper that caused much of the crisis in the first place!

It’s a great concept, helping the bank's balance sheet by moving these toxic assets off their books and onto those of its employees, and also a blunt reminder to those whose job it is to create and sell financial products in the markets that this isn't a traveling snake-oil show. Not surprisingly, many bankers at Credit Suisse are reportedly livid. At a time when they are stretched for cash, bankers – especially those in unrelated fields like mergers and acquisitions, equities and research – are saying they had nothing to do with creating this problem, so they shouldn't now have to own them. But for the past five years, the majority of banking revenues and profits came from these structured products, greatly boosting the broad bonus pool for all. When past bonuses increased by millions year over year, there was nary a peep from those same bankers who now cry “foul.”

What’s infuriating is it doesn’t appear to be what our own investments banks in the U.S. are doing. They're still handing out the usual cash and stock bonuses (with bailout money courtesy of the Wall Street Welfare State Act, Busy-baby and the entire pool of America’s taxpayers)! But let’s think merry thoughts – don’t worry, be happy!

“They never let poor Rudolph
Join in any silly reindeer games.
No, no, they never let him play – and do you wanna know why?
Because Rudolph was poor and they were on welfare.
And they had acne, and he had short hair and wore funny clothes
And was part of the blank generation.
So they had to take him in the alley and beat him!
And that’s how he got his bloody shiny nose!” — Rudolph The Red-Nosed Reindeer, Cheech & Chong (as Ronnie Runt & the Runt-tones)

Hey … think of it this way: wealthy Republicans are now finding out what it’s like being us! Just over a week ago, they arrested one of Wall Street’s golden boys, Bernie Madoff. Even the name should’ve been a warning … Bernie burned top investors and investment funds for over $50 billion. Madoff made off like a freakin’ bandit, he did! And remember when everyone laughed uncomfortably and moved away from Sen. John McCain who said (for one day during his presidential campaign) that he would’ve demanded the resignation from Securities & Exchange Commission chair Christopher Cox? Well, some dottering fool now! McCain was right – albeit for all the wrong reasons. But, yeah, Cox was just another asleep-at-the-switch GOPer, raking in cush salary and letting the wolves eat their weight in hens from the henhouse.

But the kicker of all this is that now, for once, the wealthy investors are finding out what it’s like getting fried like chicken nuggets! They’re now learning the delicious irony of being Enron-ed out of their investments they way we non-smartest-guys-in-the-room have during the Bush regime. There’s not much really funny about it yet, though misery loves company. But give it some time and we’ll get to hear some of the ridiculous whines about having to sell their second or third home, maybe for a loss! We could see some good comic-relief come out of this once it fully transpires and the entitled examine a Chapter 13 exit.

Here’s an entertaining thought: think of them having to sit down to a meal of macaroni and cheese … the powder kind, not even Velveeta! Good eating! I’m almost smiling just thinking about it ….

“Have yourself a merry, merry Christmas.
Have yourself a good time.
But remember the kids who got nothin’
While you’re drinkin down your wine.” — Father Christmas, the Kinks
Posted by Vanessa E. Foster at 11:43 PM