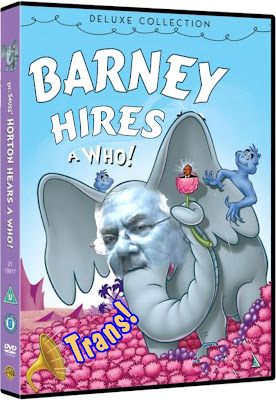 Barney Frank’s really getting a bit too predictable. Some months back, when Mara Keisling began her “I Hate HRC” tour, I began musing about the prospect of how both the Human Rights Campaign (HRC) and especially Ol’ Barn’ (“let me lock ‘em up Andy! ...I caught ‘em in the women’s bathroom!”) would attempt to sanitize their PR images. One thing I knew was that they had no intention of doing the right thing. About that time HRC announced their new hire: “activist” (though no one here had ever heard of her) Allyson Robinson.

At the time, I figured Mara was out and would need a way back in. It also seemed Ol’ Barn’ would want something to do to give the impression of (without anything actually being) contrition. It occurred to me that he would want to keep tabs and tweak his rivals HRC, and Mara the Moth wouldn’t stay away from the limelight. So it struck me that Barn’ would bring in Mara as the first congressional staffer. She’d revel in the history of it and Barn’ would have an incented HRC-antagonist that wouldn’t tell the trans community about the sickle about to loop around and slit their throat from behind.

That didn’t happen. Now all the old parties are back playing footsies, with the only isolated adversaries being the other non-NCTE trans orgs again. But it appears Ol’ Barn’ was still wondering how to fix his transphobia problem. It especially hit a new level of urgency when President-Elect Barack Obama announced his job openings with his new executive hiring policy that was trans inclusive (something he’d mentioned before). After trans people hit unprecedented activity levels to break with GLBT orgs and get Barack Obama elected, and it was noted by bloggers such as Pam’s House Blend that Barn’ and HRC were both behind the curve … something had to happen quickly!

Of course, Ol’ Barn’ doesn’t really want to push through the single-bill inclusive ENDA. So how could he proceed with some plausible cover? Hire a tranny!

Enter Diego Sanchez. Barn’ loves Diego. He’s a trans man (enough of those damn harpy trans women!) He’s educated. He has money (a rarity in trans land, and something all gay folks love to have around … there’s always needs for fundraising for something!) He’s articulate and tempered (unlike we intemperate trans folk are destined to be by stereotype). And he’s latino – an added bonus!

There are a lot of trans folks concerned about Diego, primarily because he’s coming straight from HRC’s Business Council. The perception is that he was being used by HRC to market to us rather than to market our issues to them – that, and helping provide convenient cover. And now he’s going from the red hot frying pan of HRC straight into the blue flamed fire of Ol’ Barn’.

Now I know Diego, and while no one’s perfect, I don’t perceive him as someone who’s out on a Gen. Sherman’s march, reaping the spoils for himself alone while leaving a scorched trail behind him. The one thing I can say from observation is he’s not been angling for the singular power-broker, “lone tranny star” position. What I’ve seen of him indicates that he’s of a mind that he can actually make change there, not a career or profit motivation. Only time will tell, but I feel we can take solace in that.

If any issue is relevant, I think it would be the he’s more the naïf, approaching with an ever-optimistic ingenuousness and desire to succeed into a congressional lair that is quite the antithesis to what he’s preparing for. Regardless of what anyone wants to say, Ol’ Barn’ has mastered the art of Washington. He’s a long-toothed, bonafide player, will be driving his vehicle (everyone else’s good intentions-be-damned) and is in it for the same reason all the other gray-haired critters-for-life are in it for: personal ambition and power (which in the end mean money, if parlayed well.)

“A politician is a man who will double cross that bridge when he comes to it.” — composer, Oscar Levant

Even if President Obama goes down to Barney’s dinosaur den himself, Ol’ Barn’ will expend every bit of effort to wiggle and wangle and work his way out of it. On the surface, he’ll tell you whatever empty rhetoric it is that he thinks will get you the hell out of his office. But make no mistake, he’ll go down with a fight rather than give in to anyone, and logic (if it’s not his personal one) can go to hell. He’ll undermine it away from plain sight, then scapegoat some other unsuspecting congress-critter.

Barn’s already been caught blaming Christopher Shays and George Miller for being the “hold up” in keeping trans-inclusive legislation, and many trans folk fell for the bait, hook, line and sinker. But the reality is that those were fables – Barney’s blusterous bullshit.

And sadly, this is what Diego is going to find out shortly after. He’ll be able to be eyes and ears in the office, he’ll be able to interact with other aides on what the official SOB (standard operating bullshit) message is from Barn’. Always be mindful … it is Washington.

In the end, Ol’ Barn’ will leave him to twist in the wind. Then, even if Diego does find out what Barney tells the other offices or what rabbits are pulled out of his butt (e.g. the sudden “poll” indicating that 70% of the gay and lesbian community approved going forward with non-inclusive legislation – remember that one?), what can he do? He’ll communicate our fury in tempered tones. He’ll maybe even feel used and betrayed. 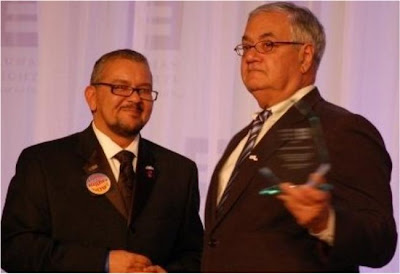 But Barney’s da boss in his office, and he don’ care. And for any of us expecting that Diego will tell him off and slit his own career’s throat there to show solidarity with the trans community … well, that’s a nice thought, and also wholly unrealistic. Take a look at the economy. Think that’ll happen? Honestly?

Diego Sanchez is setting history, and Barney Frank will take his rightful credit for that part in hiring the first out trans person ever in a congressional office on Capitol Hill. (Susan Kimberly was hired by Sen. Norm Coleman (R-MN), but in the home state office, never – to my knowledge – up on the Hill). He’ll hopefully de-stigmatize transgenders to the rest of the offices he interacts with, maybe even open other opportunities for other trans-men on the Hill. Beyond that, Barney is not changing, he’s strategizing.

And Diego’s prime duty will be running interference for Ol’ Barn’s selfishness when that occurs. I’m happy for Diego and hopeful for him. However, I’m not hopeful now for our prospects.

“Power has no limits.” — Tiberius

I don't know much about Diego Sanchez, but I do know Barney Frank and Joe Solmonese. The latter two are not to be trusted, ever. Repeat, ever.

Congressman Frank is well-known regarding his transphobic comments and actions. In light of the changing / evolving landscape, the fact that these two are colluding, again, indicates that they are repositioning themselves. Rest assured, it's for their, not our, benefit.

There are numerous bone fide organizations - too many to list but including the National Center for Transgender Equality, Equality [your state name here], and others who truly advocate on our behalf and deserve our time and attention.