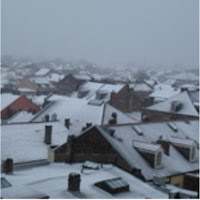 It turns out that I got pretty lucky last night (at least as far as we snow-phobic south Texans go): I ended up getting flurried with a few little snowflakes along with it. A mile north of me on my trip to the 99-cent Store (yes I shop there – or will shop there until later this month when they close the store due to not being profitable enough), I got to see snow falling. Real live flakes and noticeably falling in front of my headlights and in the parking lot. But we stayed one degree above freezing here, and my outdoor plants didn’t die (bonus!) 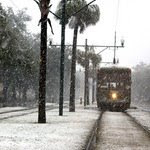 As it turns out, points up north had quite a bit of snow but little that stayed on the ground, but east … they got socked! From downtown Houston and further east, everyone got an inch and even inches (plural!) of snow on the ground! Dayton, a small town an hour northeast of downtown, had 4 inches! This sounds funny to folks up north, I’m sure. Keep in mind, we’re not snowbirds! We’re where the snowbirds go to escape the snow up north! This snowfall tied the record for the earliest snow ever in Houston. But in 1944, there was only a trace of snow. East Houston way surpassed that. This is historic.

This morning, the news showed a live shot from New Orleans. It looks like a freaking blizzard hitting town – they’re getting multiple inches! The Big Easy is the Big Freezy today. All this weather makes me long for the days back in the 70’s or 80’s when I lived in Corpus Christi, and we’d go out to the beach even as late as Christmas Eve when it would still be a warm, humid 88 or 89 degrees! What happened to those days? 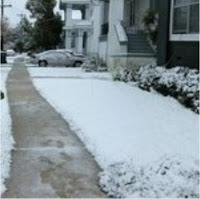 Scenes from Mid-City New Orleans (above) and its suburb, Metairie LA (below) 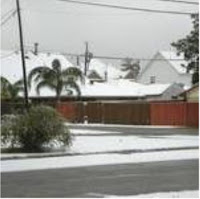 The weather isn’t helping my mood. Winter already sucks due to the dark days, and the cold helps shut you in even more. As the mood turns sour, so does your outlook. So being unemployed (as I am) and sitting here in an ice box of a house (no budget for things like heat or A/C), reading about our “Economic Recovery” or “fundamentally strong economy” or whatever the hell Bush-baby wanted to term it all these years, this begins looking like the endless dark tunnel. Maybe it’s a black hole? At least when Bush-daddy left office, as bad as the economy was for most of his term, we were at least on a bit of an upswing.

Things in Houston are feeling like it did in 1986. About the only thing missing are the proliferation of crack dealers hanging out on the street corners. I’m noting the foreclosures nibbling around the edges of my neighborhood, and the spike in random and extreme violence and death here in my part of the world. Wild, wild west Houston indeed ….

Foreclosures apparently have ebbed a little this month, reducing by 7%. Gee, I wonder if the moratorium on them and the $300 billion pumped into the banks to abate this had anything to do with that? Then again, why only 7% for $300 big ones?

Meanwhile the auto industry bailout passed in the House. For the record, I was not a proponent of the Wall Street Welfare State Act (also known as the bank bailout), but now that we’ve officially tanked the nation’s budget and established the precedent, why stop now? The automakers CEO’s should all be canned and replaced with leaders with more vision (instead of buying the gas for those buying their guzzler-SUV-vehicles). But treating them differently than Wall Street folks makes as much sense as exonerating one person for murder, then putting a bullet in the head of the next one.

Oh, but GOP senators want to filibuster and sink the bill. Oddly, the most vocal of these are the senators from southern states … whose own automaking plants are all foreign-owned and healthy carmakers like Honda, Toyota, Hyundai, BMW, Mercedes Benz, etc. Let’s kill off the Big 3 in northern states … and shift more business to the folks in their own. No personal interest in that, eh? Hey, how better to show how patriotic you are than being a senator from a southern (confederate) state making sure that we benefit carmakers who are based in Germany, Japan, Korea and ensure we once-and-for-all kill off those American-based carmakers!

After all, only unpatriotic scum would support American carmakers who actually offer careers for generations of American families, even retirement and health care! Better to shove all those gray-haired former autoworkers onto Social Security … which these same senators also want to privatize and do away with. Entitlements, ya know? Kinda like the entitlements these same senators will look forward to once they retire – oops, shhh! After all … it’s only another 2 million people out of work once it all goes away! We’ve already disemployed 2 million-plus this year … it’s not going to be that big a deal!

Meanwhile, the irascible pundit Bill O’Reilly of FOX (Faux) News promoting his memoir on yesterday’s NPR This Week. He was asked about a passage in which the social and political commentator describes people who think he himself is evil as he "puts themselves on the line." "Some people thought Jesus was evil; they nailed him to a cross," O'Reilly said in the interview.

That led to a question: Was he now comparing himself to Jesus Christ? "No, but I'm giving you an analogy that's vivid," O'Reilly answered. So O’Reilly’s persecution is vividly analogous to Jesus Christ’s, eh? Humble guy. Who wants to bet that the O’Reilly comparison to Jesus does not draw the same “album bonfire” protests by the religiopolitical types that John Lennon’s comments drew? Yeah … as O’Reilly himself said, he sees the world is just “good and evil,” and only self-declared good people can compare themselves to Christ.

Back to the subject of filibusters, it was interesting to note how conservative principle can be shifted in just a few short years. The below was from Sen. Jon Kyl (R-AZ) back in 2005 during the confirmation process for Supreme Court Chief Justice, John Roberts:

"Republicans seek to right a wrong that has undermined 214 years of tradition …. The fact that the Senate rules theoretically allowed the filibuster of judicial nominations but were never used to that end is an important indicator of what is right, and why the precedent of allowing up-or-down votes is so well established. It is that precedent that has been attacked and which we seek to restore….

"My friends argue that Republicans may want to filibuster a future Democratic President's nominees. To that I say, I don't think so, and even if true, I'm willing to give up that tool. It was never a power we thought we had in the past, and it is not one likely to be used in the future. I know some insist that we will someday want to block Democrat judges by filibuster. But I know my colleagues. I have heard them speak passionately, publicly and privately, about the injustice done to filibustered nominees. I think it highly unlikely that they will shift their views simply because the political worm has turned."

So three and a half years later, how does this same senator think of his principled stand stated above?

The Nov. 7 edition of the Triangle Business Journal reported that Jon Kyl, the second-ranking Republican in the U.S. Senate, put president-elect Barack Obama on warning that he would filibuster U.S. Supreme Court appointments if those nominees were too liberal. “He believes in justices that have empathy,” said Kyl, speaking at a Federalist Society meeting in Phoenix.

Earth to Sen. Kyl: remember when George W. Bush was re-elected with what he declared to be a “mandate”? And that mandate was to elect Supreme Court justices that followed his mold, as the electorate instructed? Well, guess what? We’ve recently had another mandate. No less than 57% of those who cast their votes for Obama stated that Supreme Court justices were an important reason why they cast their vote for him. Are you, the ever-so-principled conservative Sen. Kyl willing to openly defy the mandate of the people?

Not only is Kyl an astounding hypocrite, he’s not even a very clever one! How partisan is it when you make such statements mere days after an election, when the new electee hasn’t even been sworn in – much less have any nominees been named! Anyone who had an idea that Republicans were going to be anything but obstructionists out to ensure no bi-partisan common sense can put the last nail in that coffin and lay it to rest!

Let the neo-con obstructionism begin! (And yes, America, nothing will get done, the country will tank, and the red-meat folks will be laughing and wringing their hands while they watch the USA get flushed down the toilet)

This alone would normally nominate Kyl for Tool-Of-The-Day. But no … Joe The Plumber (yes, he’s back in the news) wins that one! Yep, Joe The Plumber’s Tool came out in the news saying he was “appalled” with Sen. John “My Friend” McCain, specifically for his reasons for voting for the Wall Street Welfare State (WSWS) Act (aka: the bank bailout). “I was angry," Wurzelbacher told conservative radio host Glenn Beck on Tuesday. "In fact, I wanted to get off the bus after I talked to him."

Interesting! There’s only one problem with this … why did he even get on the McCain “Straight People Talking” Bus in the first place when this occurred AFTER the WSWS Act passed and was signed by Bush-baby? Yeah, Plumber’s Tool, go ahead and use that as an excuse … when you didn’t even hit the TV airwaves until the night of the second presidential debate! Joe, do you make it a habit to put your name and face all over the media when you can’t stand the policy positions of the guy you’re shilling for? So how are we to ever believe you on anything when you can pull such straight-faced public deceit, you who stated publicly you want to run for political office against Marcy Kaptur (D-OH)! What a credible guy – NOT!

Meanwhile, the Plumber Tool had only praise for McCain’s running-mate, calling Sarah Palin “the real deal.

"It disgusts me on how often [the media] try to bash her just for her sincerity," he said. "She really wants to work for America." Yeah, I hear the paychecks are nice … and the clothing budgets are pretty cushy too!

I said it before, and I’ll say it again: if the neo-con base has their way, the future GOP ticket will be “Pit Bull With Lipstick” Palin and “Joe The Plumber’s Tool” Wurzelbacher. They’ve captured the minds of Republican America …. You betcha!
Posted by Vanessa E. Foster at 10:29 AM