Day Three began slowly as I was still recovering. Sally (who I’m rooming in with) said it was “altitude sickness.” Apparently my running full blast in this thin air, coupled with my dehydration was what caused it. Sure enough, after drinking what seemed gallons of water and loading up on vitamins, I began to regain my energy as the morning wore on. 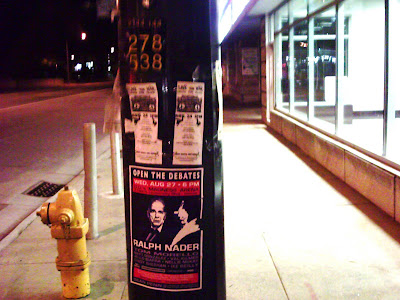 Making my way downtown, there were rumors that Sen. Barack Obama was in town a day before his Invesco Field convention headliner. Sure enough, at one point that morning I saw a brusque speed-through with police and what appeared to be secret service SUV’s making an improbably fast run through downtown Denver. Obama, maybe?

I managed to catch the last half of the DNC First Nations (Native American) caucus before heading to the DNC Stonewall (LGBT) Caucus. One thing that always amazes (and even irks me a little) is how many natives continue using “Indian.” Sure, everyone knows the term. But it seems to just perpetuate the same inaccuracies and validate the laziness of those who thought they were “discovering” us here in “India.” We aren’t from India. If Euro-Americans get to be Americans, why can’t we? We’re native here. 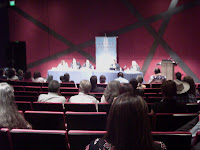 The Stonewall Caucus was a chance for catching up with LGBT friends and even getting in an interview with the third largest magazine in the world – from Brazil! They wanted to know the distinctions between the gay and lesbian community’s priority (marriage) as opposed to the transgender community’s priority (employment and hate crimes protections). They were surprised that the gay and lesbian community led the fight on both communities’ priorities, while we led none (which I noted wasn’t by our design.) I presume things are different in other countries, but America’s not there yet.

My primary reason for attending the Stonewall Caucus was the presentation of the second Jane Fee Award to the most heroic individual in the gay and lesbian community who advocates on behalf of transgender equality within the GLBT community. As it turned out, our presentation was the wrap up of the caucus – but we did at least present it onstage this year (as opposed to in a stairwell in 2004!). Rick Stafford of Stonewall Minnesota was this year’s winner, and a very worthy one indeed.

Due to the timing of the presentation, we didn’t have the entire transgender delegation to present it. Nevertheless, Rick was very gracious and kind in noting the inopportune time slot for us (once most attending had left) and recognizing trans efforts in the fight for equality! Maybe if more trans folk become involved, we’ll attain more influence over scheduling things like the Jane Fee Award. Currently we’re powerless.

Power seemed to be the theme again at the Native Nations Reception at the Art Museum. Our rep on the platform committee took time to highlight what is surely the most native-inclusive platform the Democrats have ever proffered. This effort truly had Barack Obama’s fingerprints all over it and was quite welcomed! Other speakers on the panel, Wizipan Gariott and attorney, Ken Harper demonstrated other examples of how the native communities are becoming empowered in the campaign and elsewhere. 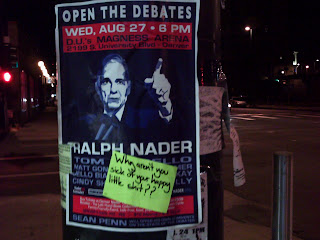 Harper noted that our lack of being empowered before was pretty much our own community’s fault. We needed to be a part of that power, and utilize it like other segments of society, and only then would we see the same progress. 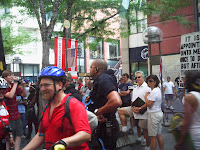 Afterwards, it was the final night of convention at Pepsi Center. After hearing of increasing protests the last couple days, I noted a much heavier police presence. The riot squads were out in full force – some conspicuously open, others more subtly located around corners awaiting a call for reinforcement. It left no doubt at all, Denver Police Dept. was not going to mess around. It was an intimidating sight. 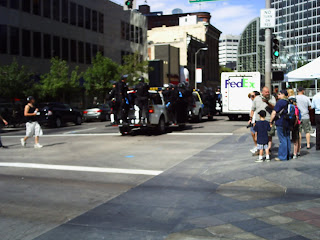 Of course the counter-protesters were out too. Much of the downtown mall was clogged with both neo-conservative evangelicals and the liberal shouters fighting back. There were the ubiquitous photoshopped signs of what appear to be aborted babies (sometime ago debunked as being projects contracted to college students at Colorado University paid by some small-time evangelical empire wannabes). 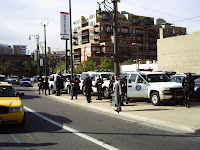 One man drove his truck through with “Leviticus 26:22” painted in bold on a signboard the front. Ironically, it was the wrong verse – the quote he scrawled was actually from Lev. 26:17: “Those who hate you will rule over you.” His verse would’ve been, “I will send wild animals against you, and they will rob you of your children, destroy your cattle and make you so few in number that your roads will be deserted.” Honest evangelical mistake, I suppose.

What really flabbergasted me was when the truck drove off with its speakers blaring. On the back signboard, there was a photoshopped picture of Sen. Barack Obama giving Colorado Gov. Bill Ritter a French kiss. Nice. Certainly an accurate photo too, I’m sure … or so they’d have us believe. It amazes me how many evangelicals seem to avoid reading the one commandment: “Thou shalt not bear false witness.” Nine commandments must be okay to them, as long as you break the other doing God’s work by stopping Democrats from being elected. 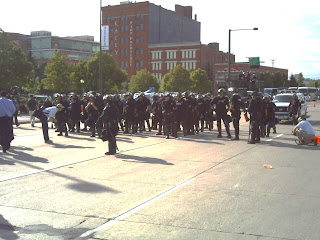 Once in the convention, everything had a more electric feel. The speeches were collectively much sharper as well. Both Texas Rep. Chet Edwards and Tammy Duckworth gave evocative speeches. Tammy’s walk offstage after speaking was a stark reminder of what Republican America has done to its veterans, but not necessarily what it’s done for its veterans.

Then came the “warm up” for the Veep. Pres. Bill Clinton. While I worried about his speech, and I’m sure he fretted over how he’d be received, he was given the largest standing ovation I’ve seen in a Democratic convention. In fact, it was so effusive he could barely get the crowd to tire and shut up! Once he spoke, though, he showed exactly why he was a master politician in Democrat-land, breaking the Republican monopoly these last twenty-eight years. “Our nation is in trouble on two fronts: The American dream is under siege at home, and America's leadership in the world has been weakened.” 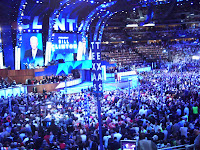 Thus began a red-meat speech for the blue-state crowd, with white-bread populism in full regalia.

“Our position in the world has been weakened by too much unilateralism and too little cooperation; a perilous dependence on imported oil; a refusal to lead on global warming; a growing indebtedness and a dependence on foreign lenders; a severely burdened military; a backsliding on global nonproliferation and arms control agreements; and a failure to consistently use the power of diplomacy….

“Look at the example the Republicans have set: American workers have given us consistently rising productivity. They've worked harder and produced more. What did they get in return? Declining wages, less than one-quarter as many new jobs as in the previous eight years, smaller health care and pension benefits, rising poverty and the biggest increase in income inequality since the 1920s. American families by the millions are struggling with soaring health care costs and declining coverage.

“They took us from record surpluses to an exploding national debt; from over 22 million new jobs down to 5 million; from an increase in working family incomes of $7,500 to a decline of more than $2,000; from almost 8 million Americans moving out of poverty to more than 5 1/2 million falling into poverty — and millions more losing their health insurance.” 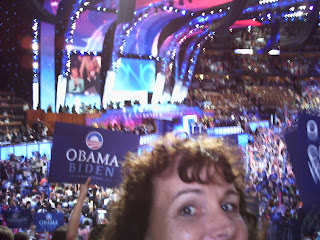 It covered everything thoroughly, and yet was tight, concise knockout punches with every swing. Clinton proved why he was the master.

The only downside for me was near the end, when Pres. Clinton began describing Barack Obama:

“His life is a 21st century incarnation of the American dream…. The values of freedom and equal opportunity which have given him his historic chance will drive him as president to give all Americans, regardless of race, religion, gender, sexual orientation or disability, their chance to build a decent life, and to show our humanity, as well as our strength, to the world.”

It was music to the ears of everyone attending the convention, save for the eight of us who happen to be transgendered. We’re still not part of those “values” of that “American Dream.” Thanks Human Rights Campaign.

Sen. Joe Biden, our Veep-to-be, really didn’t need a warm up though. As always, he showed why he’s an astute campaigner: “To all those people in government who are honoring their pledge to uphold the law and respect our Constitution, no longer will the eight most dreaded words in the English language be, “The vice president's office is on the phone.””

Biden easily moved from soundbite to soundbite, from “That’s not change, that’s more of the same,” to “That’s the change we need,” to “John McCain was wrong, Barack Obama was right.” Biden fleshed it all out with a litany of examples of all of the miscues and missteps of both the Bush Administration and of the support John McCain has given to those policies. He ended his speech with a powerful wrap of how he is ready, and how we’re all ready for change. It’s his time, it’s Obama’s time, it’s our time and it’s America’s time.

After hearing a speech like that, I’m even believing it’s the Transgender community’s time as well!

“People around the world are always more impressed by the power of our example, than by our example of power.” — Former Pres. Bill Clinton, Pepsi Center DNC 2008
Posted by Vanessa E. Foster at 10:59 PM