Abstinence-Only For Non-Conservative Youth Only

“Poor is the man
Whose pleasures depend
On the permission of another.” — Justify My Love, Madonna

The chattering hubbub has somewhat died down on Bristol Palin’s pregnancy out of wedlock. Ironically, it appears that both Republican and Democrats’ campaigns were happy to see this subside. As a blogger, I didn’t really have any issue with Bristol Palin as it’s unfortunate, but still a natural occurrence. I actually felt sorry for both her and her unwitting husband-to-be.

What was saddest was seeing how the oh-so-sanctimonious-and-now-embarrassed Republican National Committee operatives did everything they could to obfuscate. They paraded her out (gotta have those family values), but had baby Trig attached to her as if umbilically, complete with baby blanket plastered strategically over her body to hide the baby-bulge. It wasn’t really overt of a bulge, but the RNC and McCain campaign’s paranoia was such that even the slightest breath of pregnancy out of wedlock was enough to induce palpitations.

Once the news became obvious (how they thought they were powerful enough to shut off all private conversation, I’m at a loss!), they discovered it didn’t matter so much to their evangelical moralist base. Evangelicals rallied round, regardless of the values dichotomy. Now that Bristol was allowed to be a real teenager, sans blanket, and without permanent babysitting penance of mom’s progeny, she actually looked happier. She was just another of the Palin kids, enjoying the moment. 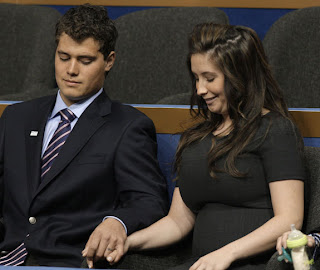 Evangelicals were fine because Bristol’s mom, Sarah Palin, would do their bidding regardless of how it contraindicated her own reality. Better yet, Bristol’s situation was the perfect opportunity for them to “rally round family” and blow back Democrats who might consider bringing up the issue. Who cares if it doesn’t square with their traditional values? It didn’t mean RNC had to change their values to reality – just pretend afterwards that it never happened! Meanwhile they can exploit if for all they can squeeze out of it.

Besides, Sarah Palin showed she can deliver the red meat. Red meat lovers love red meat, and Sarah would be a good servant and serve it up for them on steamy platters.

I don’t have issue with Bristol Palin at all. There is some issue with Sarah Palin and her easy acquiescence just to “move up the political career ladder.” As for the Republican party and their evangelical pals, there’s major issue. As Jesus would call them, they’re “hypocrites.”

All these past eight years, we’ve had the GOP’s own godson, George W. Bush, pushing forth the evangelical and red-meat GOPer menu of “abstinence only,” faith-based sex education and family planning. They’ve taken every slight opportunity to crow about this seemingly “overwhelming” success. Witness the GOP’s own red-meat vice president’s family. Bristol Palin was raised in what should be the right environment, and undoubtedly with the same “abstinence only” education on how to prevent unmarried pregnancy, as well as STD and HIV. She grew up in “small town” America with “small town values” that have been trumpeted all week since the RNC speeches.

“You put this in me. So now what, so now what?” — Justify My Love, Madonna

You’d presume in small town, rather remote Alaska, you wouldn’t have such “big city, cosmopolitan issues” filtering in there like inner-city thugs riding the public transportation into the suburbs. There was her mom’s example. There were plenty of churches. There were plenty of conservative idealist residents and city leaders there to counsel and pray with if needed.

Bristol Palin isn’t a victim of inner-city, “cosmopolitan” soul pollution and morals violation. They were over forty miles from the nearest urban decay and big city blight of megalopolis Anchorage and its cesspool of gangs, drugs, prostitution, dangerously trendy music with its hidden messaging and of course, the ever-present threat of community organizers!

Bottom line: Bristol Palin was a rather typical teen. Many of these teens’ conservative parents grew up in the psychedelic 60’s, the rock-and-disco 70’s, and the punky, hip-hop 80’s. Truth be told, they know what these kids feel now – and they felt (and if they’re truthful, experienced) it then. The problem is these parents are wanting to live their pursuit of personal perfection vicariously through their children. They want them to be the Godly perfect souls they wish they had been – but never were. So they impose moralistic rules on their kids and others via political means which they would never have been able to live up to themselves.

George W. Bush, the blindly obedient purveyor of this “new, Godly, abstinent lifestlye” would have never stood for something like that! Even well into his later adult years, he was renown for being the party boy, the wild child, and anything but the image of wholesomeness the evangelicals mandate. It’s not just Bush-baby, though. Anyone with an RNC brand on their ass must capitulate to whatever the Dobson / Robertson / Reed (nee Falwell) dictates.

If they don’t behave and get muley, they get the cattle prod put to their maverick asses: Do it our way, or we stay home and you lose the election.

But something new has happened: these evangelicals will mutate even their own morals a bit. Just a few tweaks here and there, as long as you get elected and move back to the hard-line, zero tolerance stance afterwards. They’ll forgive Bristol Palin and her mom, “Pit Bull with Lipstick” Palin. After that, the ladder comes back up and everyone else faces “compassionate conservatism” aka: tough love.

The Religiopolitical Dictum: For all you offspring of non-conservatives, it’s abstinence only! No birth control! No “decisions” about whether to have your kids! No sex education or family planning! This goes doubly for all you big-city, “cosmopolitan,” amoral urban dwellers who are virtually the scum of the earth! Triply so if you’re one of those swarthy, minority inner-city types!

We may be lulled into thinking this is a new dawn of understanding from Evangelical / RNC America. If you’re believing this, look no further than both Sarah Palin’s and John McCain’s own stances on women’s right to choice or sex education or family planning. As soon as Bristol has her child, you can bet this issue will disappear from sight, and religiopolitical intolerance will be back in force once again.

“You always taught me right from wrong
I need your help, daddy please be strong
I may be young at heart but I know what I'm saying
The one you warned me all about
The one you said I could do without
We're in an awful mess, and I don't mean maybe” — Papa Don’t Preach, Madonna