“We need leaders once again who can tap into that special blend of American confidence and optimism that has enabled generations before us to meet our toughest challenges. Leaders who can help us show ourselves and the world that with our ingenuity, creativity, and innovative spirit, there are no limits to what is possible in America.” — Sen. Hillary Clinton at Pepsi Center, DNC 2008

Even though we didn’t have any rousing speeches on day one, and I stayed up way too late at the Willie Nelson concert / CH2M Alternative Fuels party the night before (Willie’s performance was on fire!), I still managed to get myself up at the crack of dawn and make it to the hotel on time for credentials.

But day two saw me hitting the ground running without missing a beat. The DNC Women’s Caucus was great, with rousing speeches from all – even a few stars like hometown girl Eva Longoria. Donna Brazile’s speech was electrifying, and I wish I had her energy after her arduous schedule! 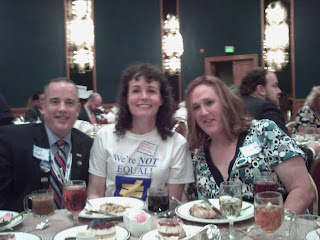 While wearing one of my “We’re Not Equal, Never Have Been” T-Shirts again, I got a lot of supporters from Hillary supporters that were non-lesbian! One even gave me a vigorous thumbs up and, “That’s RIGHT sister! Tell them the truth!” Even one of the female guards who would search my bag before entering Pepsi Center that night asked where she could get one of my tee-shirts! Maybe I’ve accidentally stumbled upon a new movement: The movement of the disparate and disenfranchised! None of them apparently knew the original significance of the symbol. 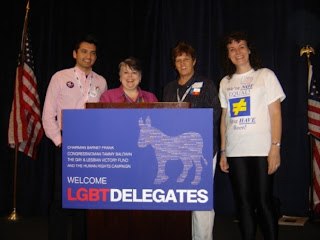 At noon, it was our GLBT Delegates Luncheon sponsored by Victory Fund, the Stonewall Democrats and the Human Rights Campaign (HRC). Even though HRC was a co-sponsor, I made no bones about wearing, nor any attempt to hide my “Not Equal” T-Shirt to the event and parking myself near the front, left center. There the significance of the symbol on my shirt was obvious and to some, obtrusive. To the disapprovers’ credit, they held their tongue as did I (my plan was to react, not instigate). If anything, I even got a few compliments! Victor Castillo of Houston’s Stonewall Democrats came over to say “I like your shirt!” We have supporters! 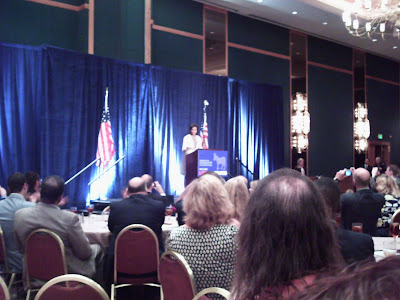 Our surprise guest at the Victory Fund Luncheon was Michelle Obama who spoke to the crowd. Again, as on Monday night, I was very impressed with her speech. It must also be noted that whenever she mentioned anything relating to rights, she was very conscious of saying “LBGT” each time. She even mangled JoeSo’s last name a little – poetic justice!

As Ms. Obama spoke, I noted that when she turned to address our side of the room, she appeared to look directly at me … sitting facing her with my “Not Equal” shirt clearly in view! Hopefully she asked questions, although I know she won’t get the truth until she hears it from us who live through this. 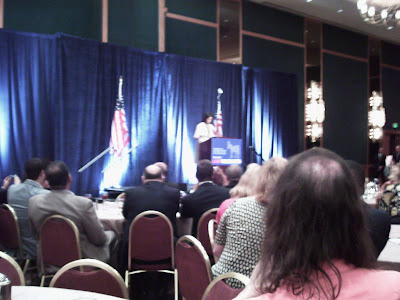 Reps. Tammy Baldwin, and of course Barney Frank spoke to the gathering, and they even let trans-man Diego Sanchez address the crowd at the end of the luncheon. I could’ve lived without the one muttered comment a table over, though: “do we really need to hear this?” Progress rolls forward … and there are those who will help roll it back too. 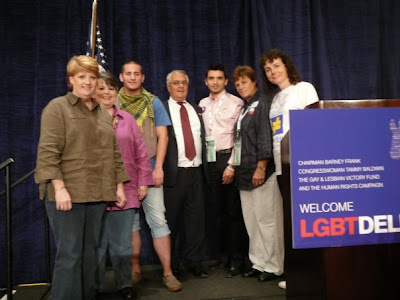 Even more delicious, Victor Castillo called me when lunch was breaking up to go up to grab a Houston delegation group photo with Barney himself! Yes, me with my “Not Equal” shirt was implored to hop up on the stage for the group memento! Plane ticket to Denver, $214. Lost week at work, $592. Photo with my “Not Equal” Shirt standing on stage with a not-too-happy Barney Frank, priceless! 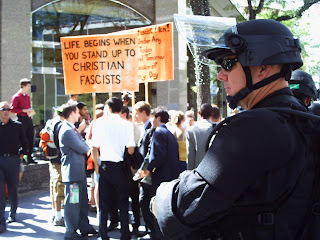 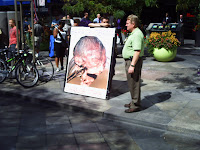 After leaving the Victory Fund luncheon and walking around downtown, I suddenly hit the wall. I’d been parched all week long and my thirst seemed unquenchable. My energy dropped so low, I was afraid I was getting sick and did not make the afternoon event with the National Women’s Political Caucus I’d paid to attend! It was tough trying to bring myself back up to the Pepsi Center, and then I had to wait in line for over an hour and a half! 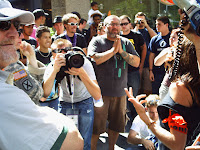 By the time I got into the convention, I was wiped out. The ice-box conditions inside the Pepsi Center only exacerbated it, and I felt feverish before night's end. Basically I stayed in my seat the entire evening.

At one point during the evening, Mara Keisling of National Center for Transgender Equality was seen making the scene on the convention floor. As I was sitting doing my people watching, I caught her walking up the aisle between Texas and Tennessee with her green floor delegate badge. Doubtless she was happy to borrow it for a time and get some convention floor time. 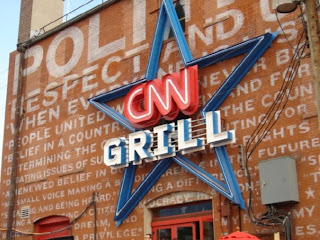 The speeches were mostly unremarkable, again! Sen. Harry Reid was so quiet, most people in the crowd simply ignored and talked over him. Even his ending seemed bizarrely without anything indicating it was over – he simply stood at the podium for a second or two, then walked away almost without anyone noticing. Sen. Mark Warner was nearly as inconspicuous – odd for someone tapped to be a keynote. The only two standouts were Gov. Brian Schweitzer from Montana who was notable more for his speaking style than the speech itself, and of course, Sen. Hillary Clinton.

The speeches were mostly unremarkable. Sen. Harry Reid was so quiet, most people in the crowd simply ignored and talked over him. Even his ending seemed bizarrely without anything indicating it was over – he simply stood at the podium for a second or two, then walked away almost without anyone noticing. Sen. Mark Warner was nearly as inconspicuous – odd for someone tapped to be a keynote. The only two standouts were Gov. Brian Schweitzer from Montana who was notable more for his speaking style than the speech itself, and of course, Sen. Hillary Clinton.

Far and away, Hillary was the star of the night – and I wasn’t a Hillary supporter. It wasn’t even her best speech, but she was able to pull off the headline without much effort. At one point she asked if her supporters were in it simply for her, or “were you in it for all the people in this country who feel invisible?” Being one of those “invisible” people, it struck a nerve with me.

It was all a great speech for most. Unfortunately for me, it was tempered with what she said near the beginning of her speech: “To fight for an America defined by deep and meaningful equality, from civil rights to gay rights….” And after that dispiriting point, I remembered why I didn’t support her. We transgenders are still the “invisible.” 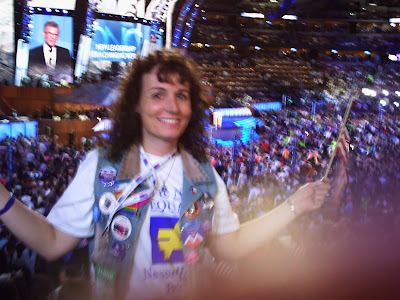 I agree with all the points she made in her speech – it was wonderful, and I support those rights for all those she included. But Hillary Clinton still could not bring herself to mouthing the words, or including us.

Thankfully Michelle Obama mouthed the words, remembered us and included us. Sometimes it’s those little overlooked details that come back to haunt you.

After leaving the convention, I did drag my carcass to a party I’d invited local friends to as my guests. However, the way I felt, all I could stomach was one drink before a long bus ride back to home base.

“Even in the darkest of moments, ordinary Americans have found the faith to keep going.” — Sen. Hillary Clinton at Pepsi Center, DNC 2008
Posted by Vanessa E. Foster at 10:58 PM