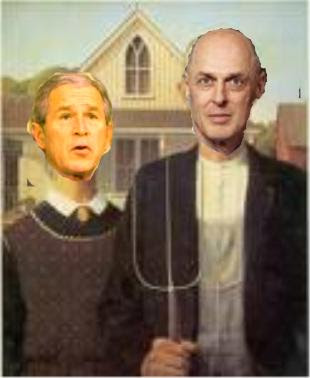 [American Goths: Fork Over The Money -- Or You're Doomed!]

This past week’s economic hangover has really stunned me. I can’t determine yet whether it was better that we in Houston were unaware of it the first days, or whether it would’ve been better to know immediately. The one thing that has struck me is that this doesn’t seem right. There’s a strange, unreal feel to it – not much unlike after 9/11 and the attacks.

Slowly, as the fog has cleared my mind gradually, I’m starting to determine the lay of the land. Watching the President’s speech just now, and earlier the Katie Couric interviews with both John McCain and Sarah Palin, it’s become clear: they’re pushing this new order, and they’re pushing it on us with urgency. This is not only abnormal, it distinctly smacks of what happened immediately after 9/11 – the rapid push, heavy pressure and comprehensive change to Americans’ civil liberties vis a vis the Patriot Act, and presidential powers a la Iraq.

We’re revisiting the Patriot Act and the case for Iraq all over again!

“There was a time I would have cried.
But those days have all gone by.
You always walked a crooked line.” — It Only Hurts When I Breathe, Cop Shoot Cop

This time, the sugar bullet will make sweeping changes to business, our economy and possibly expose our tax base in the same way Patriot Act did with our privacy, our country’s conduct in that brand new war on terror and Iraq did on powers and accountability. They came to Congress and scared the bejesus out of them – both parties (save for whatever few they kept “in the loop,” as McCain now is). Then they went on TV news, and now on prime time for a speech to drive home the same fear to us.

I’ve seen this movie plot before. It didn’t turn out like we thought the first times either, but by the time we figured it out, we’d already given them the go-ahead and all the artillery they needed.

None of this stuff makes logical sense. Republicans are all about free market, keep government from restricting business, no giveaways, etc. But think back: Republicans used to also be against creating and giving blank checks for endless wars … before Iraq. Republicans also used to be against big brother restricting their liberties and snooping into their lives … before 9/11.

Afterwards, they were cool on it. They just gave them tax breaks and that kept them quiet. (Besides, anyone who didn’t salute their GOP leader even after the tax break was just downright unpatriotic!)

“You read my thoughts, you knew my fears.
You weren't as old as you appeared,
But so much wiser than your years
And I was blind.” — It Only Hurts When I Breathe, Cop Shoot Cop

Don’t get me wrong: we need some major comprehensive changes on Wall Street and vigilant oversight over all corporate America. I’m certainly in favor of tamping out these wildly overstretched income disparities, most especially from CEO’s who produce nothing but losses for investors. Transparency is imperative after what we’ve just witnessed from Wall Street and from our government and the financial wing of this administration’s cabinet!

But writing a check for $700 billion dollars – more than we’ve spent to date on the Iraq War – in one fell swoop? And doing this when we have the largest budget deficit in American history? And to bail out failed banks, who just a few years ago were the ones pushing through changes to bankruptcy laws to make it difficult for individuals financially going under to file and recover? And to do this with no guarantee that we taxpayers will be able to recoup the cash outlay in full? And to have this request come from self-described fiscal conservatives like George W. Bush (and it seems likely John McCain) who want to make permanent the Bush tax cuts and even increase tax cuts for corporate America?
And to have this plan pushed so zealously and so urgently?

Something stinks to high heaven.

“All you little kids seem to think you know just where it's at.
Oh, I think I smell a rat!” — I Smell A Rat, the White Stripes

The day Wall Street dropped 500 points and Henry Paulson address the President and Congress, Sen. John McCain was initially trumpeting the old Bush chestnut: “the economy is fundamentally strong.” Apparently Bush-baby didn’t get the talking point out to him quick enough, and McCain later that day began the new repeating point: “the economy is at risk.” (He attempted to cover with the bullshit excuse that the fundamentals meant our workforce, worker’s innovation and productivity – which means absolutely zero when their jobs are so streamlined that they offshore or automate themselves out of jobs!)

Now this proposal goes through Congress and both parties’ critters are angry, demanding transparency in the dealings, severe restrictions on these executives’ pay, guarantees for taxpayers, additional money to help imperiled individual homeowners and oversight of this new “czar” position that the Treasury Secretary will suddenly be granted. Meanwhile, the Bush mantra, and in the echo chamber, the Paulson mantra, the Ben Bernanke mantra and the John McCain mantra are: “we are in economic crisis, we need a simple bill, and it needs to be passed as it is immediately!”

This is all we’re going to hear from the architects and backers of this bill from now until they wear down Congress into acquiescence: “The economy is in danger, we need a simple bill, and it needs to be passed as it is immediately!”

There’s a bigger plan with this than what we’re seeing on the surface. Something is amiss, and we’ll pay the price for not ferreting out and cleansing this proposal of this before enacting it. Yet in typical Bush/Cheney fashion, the proposal is foisted as a fully completed work on Congress critters’ laps and they have mere days to “pass it or else (have the Bush Crime family foist blame on them and ruin their careers)! This is exactly what they did with the Patriot Act, remember?

And like the Patriot Act and even the Iraq War which were designed and fully written well before they were submitted to Congress, this proposed bail out was as well. This proposal began when Fannie Mae & Freddie Mac were announced insolvent and in need of bailouts. Rather than alerting the country to the rest of the reality of our banking system, Paulson and the Bush Administration chose to keep it under wraps and spend the time writing up what we see now – the biggest new deal since, well, the New Deal.

It’s depressing that we’ve come to this: staring into the abyss of what Sarah Palin admitted in her Couric interview was possibly another Depression. (Palin’s interview was precious, worthy of it’s own column!)

If Congress and the American public is not vigilant and ensures there are very conservative restraints put on this Bush plan, and that we have absolute fidelity and forthrightness from both the Treasury and this new government banking behemoth with all due checks and balances, we’re buying another round of Patriot Act and the case for war in Iraq. We gave this President, and his party, trust once before. Just keep in mind how that turned out.

Beware of the Trojan Horse ....

“You left a trail of rubber checks
And broken hearts and busted necks.
What the fuck did I expect?
I don't know.” — It Only Hurts When I Breathe, Cop Shoot Cop
Posted by Vanessa E. Foster at 10:34 PM