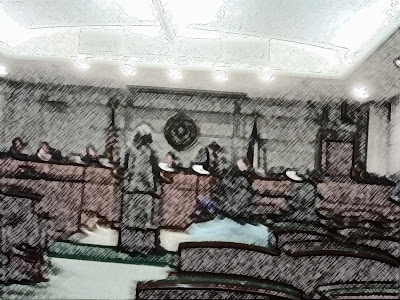 "I need you, my witness,
To dress this up so bloodless;
To numb me and purge me now
Of thoughts of blaming you." — Testify, Rage Against The Machine

It's been quite a wild week. Sleeping in my car a couple nights near the State Capitol, staying up late into the night at one House committee testimony and waiting around for a second bill's testimony 36 hrs. later, and finally driving home, collapsing in exhaust only to wake up the next day to find my dad's hometown took a direct hit by a tornado and we don't know what happened to all our relatives there (to say nothing of the family drama here at home with my sister and brother-in-law).

Weeks like this make it hard to figure out where to begin. After getting news Friday morning from the TLIS (Texas Legislation site) that the Voter Photo ID bill which passed in the Senate was coming to the House Elections Committee on Tuesday, I braced myself for another long drive and possible long night (the Senate version of it had me waiting nearly 20 hrs. to testify). Before I left, I saw a note on the same bill from Meghan Stabler, one of HRC's two trans folks. so I dropped her a note and a phone call to let her know what was needed and what to expect.

Then after discovering on Sunday the Hate Crimes bill I'd been pushing since returning from DC in early February was hitting subcommittee about 44 hrs. later. Initially I considered leaving the Voter ID bill testimony to Meghan and just driving in Thursday for the Hate Crimes testimony, but I thought better of it. Again I dropped a note to her with the update that I'd come in Tuesday and stay over until Thursday, thinking she might hit the second one as well. 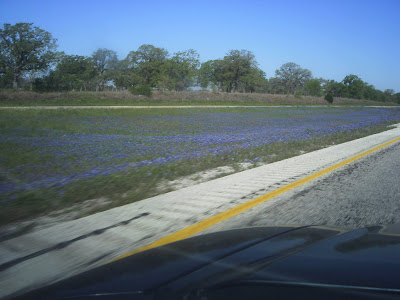 It turns out Meghan's job kept her over, she did her class presentation at University of Texas that evening, afterwards went to dinner with her mate, Erin, got tired and went home. So I never saw Meghan. Even though I didn't feel like it, I'm now glad I went for both the Voter ID and the Hate Crimes bills (which I was unaware anyone else was attending by the time I left). Now we've got the crucial last piece: testimony on the bill in both Houses of the legislature and before both authors, alerting them that their proposed legislation will be stripping the right to vote from one law-abiding, taxpaying segment of the population whose photo ID's will not match: transitioning transsexuals.

Any attempt to push through Voter ID legislation in Texas that requires matching identification without dealing with name and gender changes in the state statute will result in direct and knowing violation of our civil right to vote.

And as fate would have it, I palled around with the executive director of the ACLU Texas while sitting in testimony. She saw the whole thing as well. So a little good came with the frustration!

First thing I noted when walking into the House hearing was that color-coding was in effect again, and the committee room was a sea of red! Pro Voter Photo ID folks dominated the meeting room; many of them from a name quite familiar to the trans community: Concerned Women For America! 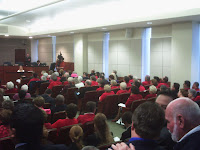 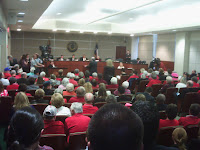 This version of testimony was a bit more entertaining that the Senate. We had some real lulus testifying. One elderly woman from Corpus Christi who said her husband was Ben Garza who'd died a year ago (presumably Jr. as the LULAC founder died many years ago), started a disjointed rant about a number of groups such as LULAC (corruption), the Teacher's Union (founded by communists), La Raza [Unida] (socialists) and impugning other groups and organizations on what seemed like a ten minute ramble that never really made a point, other than to slam the Democrats (fascist and corrupt).

At one point, we had counsel from the Texas Attorney General's Office admonish both the committee legislators and the audience not to discuss two ongoing investigations of fraud in Progreso TX and in Harris County! Later a group from the Rio Grande Valley (RGV) of mostly elderly women called the OWLS (Objective Watchers of the Legal System) testified individually to support the Voter ID bill due to some of the aforementioned fraud in Progreso being actively investigated by the Attorney General's Office.

Later, when one of the OWLS women were testifying, State Rep. Betty Brown (R-Kaufman) began inexplicably reading affidavits with details about Progreso during the committee, becoming part of the record of proceedings in defiance of Attorney General's instruction! It's ironic that someone supporting this legislation before us, intent of which is to end voter fraud, would then defy the Attorney General's counsel and potentially jeopardize their case on ... voter fraud! Yeah, she seriously wants to end voter fraud, hmm? 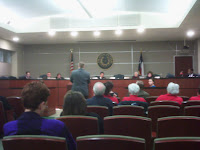 But the hits kept coming from Rep. Brown! At one point while questioning Ramey Ko, testifying on behalf of Asian-American Texas voters was questioned by the affable Ms. Brown: "well, rather than everyone here having to learn Chinese, I understand it's a difficult language, do you think it would behoove you and your citizens to adopt a name that we could more readily deal with here?" "Can't you see that this is something that...this is something that would make it easier for you and...the pollworkers if there were some means by which you could adopt a name just for identification purposes that was easier for Americans to deal with?" http://www.youtube.com/watch?v=v9hdVUzMeDw

Dig it. We're an enlightened state here in Texas. And this comes from the same conservative party that won't do anything to make transitioning trans people identities easier for pollworkers to "readily deal with"! I wanted to scream.

Later in the testimony, I saw Randall Terrell from Equality Texas walk in and chat with folks up near the podium. It was a bit surprising as it's not a bill that effects gay and lesbian (thus not really on their radar – it wasn't on the Senate side.) 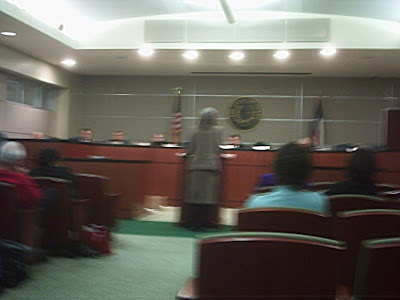 Finally I got my chance to speak well after 11PM. The first thing I noted odd was the clerk, who usually sat at his desk next to the testimony lectern with the three minute timer physically got up and sat beside the committee chair at the committee table. He returned again to his desk after I finished. The next thing was the reaction of the committee members – almost immediately stand-offish. I was the only person testifying up to that point that was not asked follow-up questions, and instead was cut off by the committee chair ensuring me that transitioning transsexuals are "part of the bill" or if not, they'll ensure that we're "covered" in it.

Yet there was no awareness of Committee Chair Todd Smith (R-Bedford) of the bill's language (nor desire to discover), and he appeared all about ensuring me we're covered and having me leave the podium as soon as possible. All in all it was a bit curious behavior on their part.

Eventually though, I actually made it out of the hearing a little before midnight! Much earlier than I was fearing initially, but too late to go anywhere. After a discussion with Randall from EQ TX after completing my testimony, I learned others would be coming in to testify on the Hate Crimes bill expanding coverage for trans Texas (which I'll save for the next blog post.)

Afterward I walked back across the campus, reflecting in the fully lit glow of the limestone Capitol Building, and back across to the parking garage where I parked. On my way back I notic0.ed two other cars parked just outside the Capital Grounds fence with people in it, apparently camping out themselves. I take it they were living in their cars, simply looking for safe places to park for the night. Fitting imagery.

Once back in the garage, I pulled my suitcase out of the trunk to bring up front and camped out in my car for the night. Not a bad spot to sleep for the night, really. The next couple days were gonna be busy, and I needed some sleep.

"On the corner
The jury's sleepless.
We found your weakness,
And it's right outside your door!
Now testify!" — Testify, Rage Against The Machine
Posted by Vanessa E. Foster at 12:52 AM