Equality Isn't (If You're Trans) 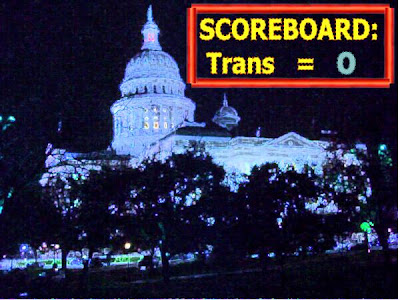 "All animals are equal, but some animals are more equal than others." — author, George Orwell from the novel "Animal Farm"

The past few days were a bit of a shot to the gut. First the report of a Greeley, CO talk radio station advocating for trans people "their teeth kicked in," following on the heels of the prosecutors not using the defendant's confession in Angie Zapata murder trial. Then yesterday, for me personally, a bomb-drop: the senator I was counting on to author and sponsor the companion to our Hate Crimes bill won't do it because, as the aide said: "we had already committed to the 121 bills that we currently have filed. However, as you are quite aware, she will continue to be supportive."

And as a nice little two-fer, our name and gender change bill hadn't been sponsored in the Senate, and when I inquired of Phyllis Frye on the bill, she said "Equality Texas is running the show on this and all of the LGBT bills. I have no knowledge of the bill number." That bill's not introduced in the Senate either.

Two years earlier I'd gotten reports from everyone in the trans community locally, practically gushing over the Equality Texas Lobby Days. We hadn't had that kind of sense since the 1999 Equality Begins At Home, brainchild of Kerry Lobel of NGLTF. Of course, we weren't aware of what was afoot by our state group Lesbian-Gay Rights Lobby (LGRL) at the time, so the euphoria at lobby days time was still on a Lone Star high.

Those were happier, much more innocent days – before the scales fell from our eyes.

After the 2001 LGRL ditching of trans – even after I'd helped pull in one of our most conservative GOP folks to support the bill, albeit with his choice of nomenclature (sexual preference) – I was hopeful when Randall Ellis took over LGRL in 2002. To his credit he immediately did things the right way by involving the community -- even we trans leaders burned raw from his predecessor. He fielded the heat, understand the mistrust and worked to resolve it. Unfortunately, his was a short-lived tenure as he was suddenly ousted once the org was absorbed by the Equality Federation.

There was an initial shock, dismay and wariness about this new move to the Equality Federation with it's mixed-bag history on trans stuff (most being not falling on the positive side)

Nowadays those of us with an active history in this trust nothing. It's not a bad thing. We need to be more involved and certainly much more educated and vigilant of what law is being passed lest we fall asleep and have another attempt to aggressively strip our rights a la Patriot Act.

However, I must say I fell a bit for the hype from my own trans community on the 2007 Lobby Days by Equality Texas. They even had a couple of trans folks on their board (shocking in that the requirement for board was once a $2400/yr. "give or get" contribution – very pricey in trans circles). Armed with the good sentiment, I had one view in my mind's eye going up.

"Believe nothing, no matter where you read it, or who said it, no matter if I have said it, unless it agrees with your own reason and your own common sense." — Buddha 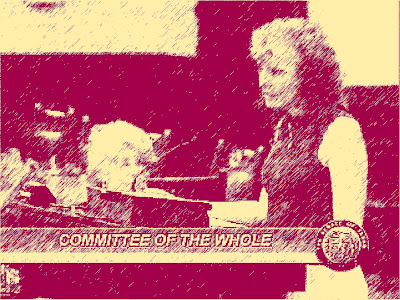 Well, that was kinda dumb. But what gets me is that most of the trans community here is still going to fall for the facade of it. Keep up the image and no one's the wise. Hey, it's a paycheck!

Meanwhile, the only GLBT bothering to show for testimony on the Voter Photo ID bill was my broke-ass! Actually it's not that surprising: it deals with photo identities regarding our right to vote, which is not their issue. It's our issue. And therein lies the rub. On our issues, the only ones who really know our priorities or are aware of the nuances of things like our identification and how key that is to our lives are us!

"Well I won't say that I'm giving up,
but why wait around for nothing
when things are going the way that they should –
but never my way?" — The Worst Of Times, Eric Hutchinson

Why should we be placing our eggs in a GLBT basket (always gay or lesbian led, with priorities and perspective that would naturally reflect that)? What are we trans people thinking putting blind faith in that? It's our issues, our lives on the line – why trust it to those who really aren't aware of the differences, much less importance? It's why, unemployed, broke or whatever, we must be hands-on active about our future and not stand for pat answers.

This year's result is that we have two crucial bills we've long been fighting for, and it appears neither will even make the senate at this point.

Equality is a nice word, and means a lot if you are gay and lesbian. It means a chance to be equal.

If you're trans? Equality isn't. 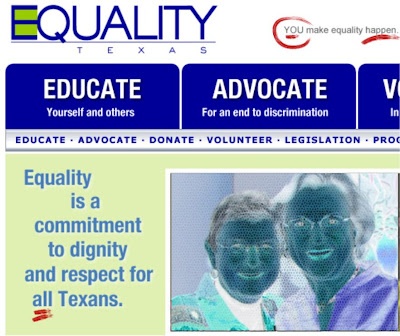 They have it right: "YOU make equality happen -- don't wait around for them!"


"Whatever you want in life, other people are going to want it too. Believe in yourself enough to accept the idea that you have an equal right to it." — news anchorwoman, Diane Sawyer
Posted by Vanessa E. Foster at 7:20 PM

I would like to clarify the information about Equality Federation.

Equality Federation never "absorbed" Equality Texas. The Federation is a national alliance of independent state LGBT advocacy organizations -- in fact, we were created by state groups to serve state groups. Equality Texas is one of our member groups -- but it was also a member when it was known as LGRL (Lesbian/Gay Rights Lobby) and when it was led by Randall Ellis. Randall was actually on the Federation Board of Directors before leaving LGRL.

I can't comment about details of the legislative work on transgender issues (or any issues) in Texas as I don't have personal knowledge of legislative strategies there.

I do have one piece of information that might interest readers, however. In the Federation's annual survey of state equality groups, transgender equality actually was cited as the number one legislative priority in 2009 for a majority of state groups.

Thank you for the clarification on LGRL, Toni. Apparently I presumed it was not part of the federation as the switch to the "Equality" name also coincided with the immediate voting off of Randall Ellis. I figure it was a new group/alignment, understandable that they sometimes clean house and start fresh. Hmm....

Is the federation survey online? I'll have to look for it. Indeed you're correct inasmuch as what I've seen from Equality Maryland. Kate Runyon seemed very concerned and energetic, and maybe this will get done this year. We apologize for de-prioritizing marriage for a bit in order to catch trans equality up to GLB equality, and are happy that we might see employment and hate crimes parity soon in some of these states.

One thing I noted with interest was, at least for the designated trans equality task, Equality Maryland is hiring a trans person specifically. That's an excellent breach of the barrier. Are other states doing likewise -- bringing in some of the unemployed trans activists in their positions in those states?

I'm sorry this blog was a bit harsh. Hopefully it will accomplish what was intended, even if I'm still skeptical and geared up for a very long war (as it has been already). Some of these other states are coming back for what was left off (trans) earlier, but we're going to ride herd on our own here. Back four or five years ago, I used to do the "process" for "political consideration" thing, held my tongue, remained decorous. All I ended up with was being played for the fool, and even discredited without speaking out. Now, it's a matter of recognizing I've already paid the price for it -- there's absolutely no reason to remain silent any longer.