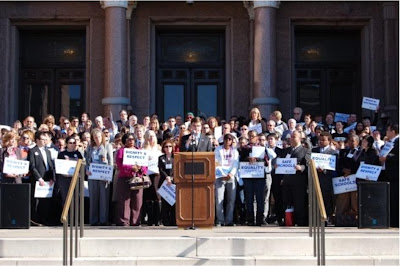 "We're this close to getting this [James Byrd Hate Crimes Bill] passed. We don't want to lose this opportunity. Just let us get this one over the hump. We'll come back for you in the next session." — Texas State Sen. Rodney Ellis (D-Houston), as told to TGAIN Lobbyists in March, 2001.

March 2, 2009 was Equality Texas' LGBT Lobby Days. Arguably this was the most well-attended in state history with estimates of nearly 500 lobbyists taking to Austin's Capitol Hill. By most accounts this was a successful effort.

A couple things did seem to fall between the gaps though, and I must say I'm still not fully comfortable with what we've got. To be sure, all of the new bills being submitted are sexual orientation and gender identity -- there's nothing wrong with those currently. Hopefully the bills will remain intact, though we're not the ones at the negotiating table and anything can happen, so no resting on laurels. 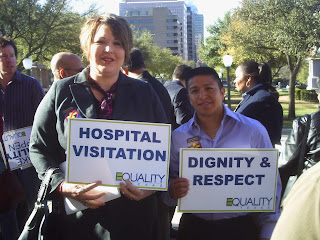 The packets they put out were very good, to the point on the legislative 'asks' and informative. There was no supportive material to prove basis of need or provide educational backing, and perhaps they feel it's not needed. On trans issues, I'm not quite sure that's the case with the newbies -- but again, that's debatable. Perhaps there's a chance they've already done the measure of background education on who we are, at the very least on trans issues.

But a couple of items weren't in the packet, because they weren't apparently pushed to the legislators and filed on the same time frame as the others. This would be Equality Texas doing the primary push, of course. And the two bills -- the name & gender marker change bill, and the expansion of the Hate Crimes Bill to include gender identity categories -- are admittedly trans only.

After getting back from Washington in mid February, one of the first things I did was check to see what was submitted for us, and I noted immediately a category expansion for Homeless -- but nothing for trans folks.

"I ain't no tiger.
I ain't no little lamb.
Suppose you tell me, mama,
Who do you think I think I am?
And oh baby, don't you give a damn?" — I Will Not Go Quietly, Don Henley

In 2001, Texas' James Byrd Hate Crimes Bill was passed and signed into law, including most everyone ... except transgenders. As head of TGAIN, I was very involved in both 2001 and the initial 1999 bill. My 1999 visit taking newbie lobbyists, Mark Wood and Patrick McIlvain of Houston on their very first lobby visit with hardcore State Rep. Warren Chisum (R-Pampa) won his agreement to support the bill with his wording that made it sound as if it were our choice (culpability) -- sexual preference and gender non-conformity.

Once we got his word, we left quickly before he changed his mind! As long as we were covered by definition, I was overjoyed to have his support regardless of what he wanted to call us. Chisum signed on as sponsor of both editions of the bill -- he lived up to his word.

His sponsorship also brought along a handful of other traditional Republicans as well. It proved key in 2001.

However, when the bill was imminently ready to pass, it was the Senate author who was immovable. Sen. Rodney Ellis was hungry for scoring the goal, and Lesbian Gay Rights Lobby's (LGRL) Dianne Hardy-Garcia was more than willing to facilitate it by using transgenders as the sacrificial lamb in order to get the bill passed. After speaking with Sen. Ellis, and in the interest of "process and political considerations", I decided to allow them their victory, refrained from raining on their parade, and waited. 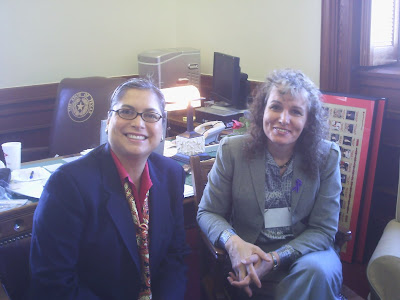 Over the years and the numerous revisions of the 'excuse,' I now realize that wait was in vain. Hardy-Garcia dodged her responsibility as well, escaping to more attractive environs running the Human Rights Campaign's (HRC) Millennium March. I will admit: I was played for a stupid fool. Once burned ....

Years have since passed. LGRL later hired Randall Ellis, who made every effort to repair the fractured community damage -- someone I actually had faith in and could trust. But then came 2005, and a sudden change to rename the organization as part of the "Equality Federation," a new leadership that was key on finding new leaders in the trans community to deal with (circumventing TGAIN) and keeping us in the dark. Shortly after, there was a board vote in the middle of the night to rid itself of Randall Ellis. New era, new approach, and for we original trans leaders, new concerns. 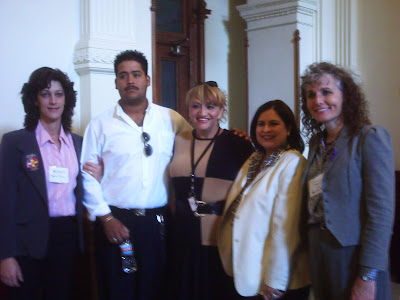 With the past two lobby efforts, I've been financially out of commission. When you self-fund your organization's efforts and you're unemployed -- esp. as a trans organization, then things are mandatorily dormant. No one should go homeless "for the cause."

So with this being my first exposure to Texas' version of Equality, I was curious. Equality in general is a very mixed bag regarding the "T" in GLBT: some really good, some okay, and others outright horrible. During the speeches, there were PowerPoint scrolls on the overhead projector that flashed the Equality Texas Logo with other organizations (presumed donors or supporters?) including groups like Log Cabin Republicans and the "Big Equal Sign" -- yep, HRC. *Sigh* Texas' version appears, at least prima facie, to be somewhere between 'okay' and 'good.'

However, not having the two trans bills, especially one which was left off of a GLBT bill like hate crimes seemed rather ... odd. In fact, it felt as if no one -- not even the trans group they were working with locally in Austin -- seemed concerned with bringing up the addition. Nothing had been submitted even by the time I made it to town, though there was one in the works in the House, albeit not fully written up as yet. It seemed like a glaring oversight.

Then while in Austin, one of my friends in the House (I'll withhold the name of the Rep) contacted me by Email:

Vanessa, I'm with you on the issue and regret very much that the transgendered community was left out of the original Hate Crimes bill. Doing so was wrong because every person should be protected from being singled out for who they are and should be protected from targeted violence. However, I want to express my concern that opening up the Hate Crimes statute would provide Republicans the opportunity to remove the sexual orientation language. I'm sure you know how difficult it was to keep that language in the bill. Hate Crimes legislation could've been passed many years before it was finally passed because the supporters of the bill hung on to the idea that sexual orientation should be included. It would not surprise me at all if Republicans actually moved the bill through the legislative process to use it as a vehicle to remove the words "sexual orientation" from the statute.

There were pieces of that logic missing though. Hate Crimes was already expanding language for Homeless and there were numerous new bills being submitted with both sexual orientation and gender identity -- including one for School Anti-Bullying, which also deals with bias-related taunts and violence with penalties for violations. It was also out of character for my friend to come up with the sudden reluctance -- something was afoot.

At lunch I buttonholed the Equality Texas Political Director, Randall Terrell, explaining to him my desire to move the hate crimes expansion forward, as well as my planned pulling of Rep. Warren Chisum (and another Republican) from the floor to discuss following through with the 1999 agreement remnants.

That's when I was stopped. He instructed me not to pull Chisum and talk to him as he had a visit with Chisum and needed his sponsorship on another bill -- a study to report on why existing Hate Crimes charges aren't being filed by district attorneys' offices. My request to get Chisum for expanding the language would have to wait. 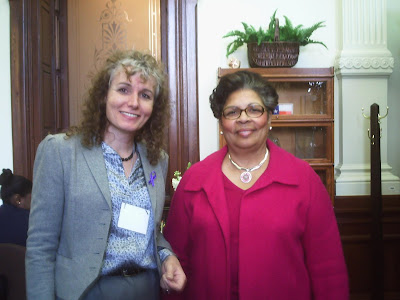 There's a distinct sense of heel-dragging going on here. I allowed Randall to have his meeting, to push forward Equality's desired bill. But so far all I'm seeing is stonewalling on my request. Once burned ... twice learned.
Even the local trans folks working with Equality seem rather blase about it all. This isn't a positive sign. I'm presuming they will continue keeping me in the dark and the folks wanting this quashed will work to counter me. And I will not remain silent this go-round. If there's anything I've learned over the years of using patience and decorum in allowing the "process" to play out is that it pays off with a big fat zero! When there's not anything there to have ever gained, why bother pulling punches?

This bill will begin moving forward even if I have to begin embarrassing people publicly to do so. I won't wait around, busting ass, spending money and wasting time for a satchel full of nothing but empty lies.

Silence equals death, and I damn sure don't feel like dying! This time it's quite personal.

"Turn this thing around!
I will not go quietly!
I will not lie down!" — I Will Not Go Quietly, Don Henley
Posted by Vanessa E. Foster at 11:53 PM