Again HRC To Support Only Trans-Inclusive Bills – And This Time Is Different How...?

"Fate comes a-knockin',
Doors start lockin',
Your old time connection,
Change your direction.
You ain't gonna change it.
Can't rearrange it.
Can't stand the pain
When it's all the same to you...." — Same Old Song & Dance, Aerosmith 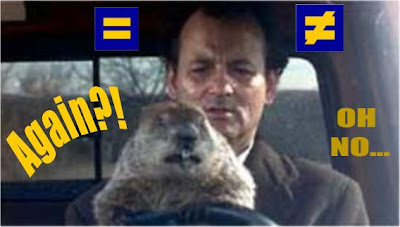 Isn't it a bit late for Groundhog Day? I know it's March – I meant the movie starring Bill Murray. It seems we're caught in a loop where we wake up to what we believe is a new day, and everything instead plays out as an endless copy of the day before.

This came through today in an undated press blurb from the Human Rights Campaign (HRC) through one of my friends who used to work with the group:

It's the policy of HRC that the organization will only support an inclusive ENDA. In 2007 House leadership informed us that there were insufficient votes to pass an inclusive bill, so they decided to vote on a sexual orientation only bill. We made a one time exception to our policy in 2007 because we strongly believed that supporting this vote would do more to advance inclusive legislation. We will not support such a strategy again. We look forward to Congress sending President Obama a fully inclusive ENDA for his signature.

Yes, it seems it's time to trot out the "new and improved" version of HRC, yada yada yada. As one of the respondents to the Facebook post replied in "awesome snarkiness": "is it time for their annual trans appeal mailing already?"

Seasons change, but other things just don't. They play the same lines we've heard before and seek to convince at least a few trans folks to let the guard down, be a bit more docile and allow them to wedge us: keep the new believers pitted against those of us who've been through this exercise too many times to ignore.

Back before I even got into activism in the mid 90's, there was move on HRC's behalf to fix the problems of the 1993 Employment Non Discrimination Act (ENDA) after trans activists had banded together, even before the was a GenderPAC, to protest HRC's decision to leave trans out initially. HRC brought in attorney Chai Feldblum who, along with attorney Dana Priesing of GenderPAC and Jessi Xavier of It's Time, America to craft legislation with gender identity included in it. Supposedly in 1995 it was to be the direction HRC was undertaking to make things right.

Later that session we learned different. The ENDA bill actually came up to a close vote in the Senate late in that session: 50-49 was the official vote (back story notwithstanding – but that's for another story.)

Again transgenders were up in arms. HRC began working with GenderPAC, creating a bit of a wedge to factionalize the trans community. The International Conference for Transgender Law & Employment Practice (ICTLEP) dropped off the lobbying scene, two years later National Transgender Advocacy Coalition (NTAC) came into it. Less street protests, more press highlighting HRC's disparate treatment of trans people. After a few years of that, HRC had to change it up again.

Fall 2002 at Southern Comfort in Atlanta was where HRC announced a collaborative study with Mara Keisling, and where Mara would move to Washington DC, work in conjunction with HRC on what was to be trans-inclusive federal legislation. Piece by piece we discovered both the hate crimes and employment bills would not be inclusive.

We again learned different of this "support" for trans-inclusion in spring 2004 with Mara (now leading her newly-formed group NCTE) right in the room with us hearing it all.

So in August of 2004, the HRC Board of Directors held their annual meeting where Mara Keisling and others from NCTE and other places presented before their board. After the presentation, the board voted to "only support an inclusive ENDA." Done deal – this was official from the board, not even the staff this time. Or so we thought. Over the course of the next couple years, we heard the warnings from those of our Capitol Hill contacts. Still we waited. Word from all parties – not only HRC, but NCTE, NGLTF and others – were all saying HRC and even Barney Frank were on board, fully supporting an inclusive ENDA. There was even a revisit to Southern Comfort in 2007.

Yet again we learned different when the public ditching of trans language in ENDA became known in October, 2007.

Now we see the latest sequel of "Transgender Community's Largest Advocate," starring HRC. Doubtless they want us to throw concerns and history to the wind and be "one big happy family." Many of us have been through this numerous times. Considering they've never once trusted us (for whatever esoteric reason), if you were in my position, would you trust them?

"We ain't got no friends.
Our troubles never end.
No Christmas cards to send.
Daddy likes men.
We're a happy family." — We're A Happy Family, the Ramones
Posted by Vanessa E. Foster at 11:25 PM

We won't know if its different or not until it's too late, so we lobby with the assumption that they will be either no help at all as usual, or a hindrance as usual. At what point can a liar begin to be believed?

Why is it that today I seem to be channeling John Denver?

It's the '68 Nixon, everything is new
A brand new image just created for you
A dozen different finishes and so much finesse
He's got a brand new doggie, not Checkers but Chess

It's the '09 Scampaign, everything is new
A brand new statement just created for us...

I'd like to know WTF is wrong with the national HRC figureheads. Most state and local HRC peeps are very trans-inclusive.

In Utah, HRC voices are loudly and proudly trans-inclusive and have been vocal about it to their peers in DC. Board member and Utah resident Bruce Bastian is very vocal about his support.

I hope this time is different. I really do. Even Barney Fife (Frank) has stated he won't support a non-gender-identity-inclusive bill

There is strength in numbers. If anyone (gay, straight, transgender) doesn't make every effort to pass an all inclusive bill, it will be very difficult to get any bill passed at all. Let's put our differences aside and fight like hell. We really have a good chance of getting this passed, but it will take effort from everyone!