Post Inauguration, I’ve actually remained in the DC area as I was planning on co-presenting at the IFGE Conference two and a half weeks hence. I’m in between jobs anyway, have managed to make it relatively productive, and by staying with friends, managed to make it economically feasible on my zero budget! As Mara Drummond mentioned last night while we were at dinner, being trans is almost like being in a club like the Masons or something, where there are chapters and friends in every town!

I didn’t really do the tourist thing, per se (though I did have an open invitation to do so with Angie Martin & Georgie Jessup). Unfortunately I haven’t been able to work it into the schedule as yet, and may not get to do that.

However, I did get chance the weekend before last to go out to watch a local heavy metal band whose drummer is a personal friend of Angie’s. Scarlet Angel played a little bar in Glen Burnie called Crossroads, and did a very good job with both covers and also a couple of their originals. In my day, I went through a heavy metal phase, so all the songs were familiar (yes, I’m a rocker chick!) And somehow I ended up being the hit of the bar, per Angie. It was fun!

“Plug me in, I'm alive tonight
Out on the streets again.” — Live Wire, Motley Crue

Additionally I got to hang out in southern Maryland with my other friends Pat & Frannie O’Grady, and tagged along with them to their friend’s place to a Super Bowl party!

But the trip wasn’t just fun and games. The bulk of last week (with the exception of the ice day that President Obama chided us all about), I hit the Hill and made contacts with our newbie Congress Critters’ offices. There’s not much in the way of staffing in most of the offices, though a few have completed enough of the process to get a few visits with the pertinent folks.

The House side seems more settled than the Senate (true to their more tempered and deliberative nature). So there weren’t too many permanent contacts met yet – though I did get a chance to shake hands and get a quick hello with Sen. Mark Udall (D-CO). He’s a nice guy: easy, down-to-earth without a whiff of the pretension or elitism.

Of course I was kicking myself that I didn’t think to bring a camera! Oh well. 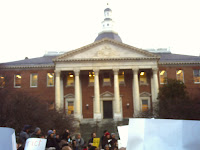 One thing I did which took me off my normal routine was to leave Capitol Hill a little early and drive over to Annapolis on Groundhog Day for Equality Maryland’s (EqMD) GLBT Lobby Day. Frannie had invited me to go with her, and as it was an evening event as opposed to the daytime lobbying we typically do, it worked right into the schedule!

A pleasant surprise was getting to see some familiar faces once I arrived in Annapolis’ Lawyers Mall in front of the Capitol Building. Dana Beyer was chatting up Frannie as I arrived (thankfully I found them in the crowd as I’d left my cell phone back in Gaithersburg). Soon after, I got chance to reconnect with Bishop Gene Robinson who was scheduled to speak at the EqMD rally. We chatted for some time, and I introduced him to Frannie, and Dana got a chance to meet him as well. 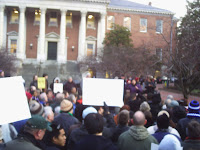 Upon turning around, I spotted another ghost from the past: Donna Cartwright was also waiting to buttonhole Rev. Gene for a chat about church politics. She was there for the Lobby Day as well.

There was actually a pretty sizable crowd of GLB and T and especially a notable number of allies! It was heartening to note their number one issue of their two “asks” was transgender non discrimination – the second being marriage equality.

Before the speeches ended, Frannie and I, along with our other crew from District 27, made our way to the first of our three office visits, along with April Arford who brought along photos of her and her spouse’s kids (they officially married in Connecticut after their civil union in Vermont) and Sandy Bell, an ally and vice-president of Maryland’s chapter of the National Organization for Women (NOW). April was on her first-ever lobby visits, while we trannies and Sandy were old hands at this. As such, we let her do the bulk of the talking to get her feet wet, and comfortable in doing her own advocacy.

The immediate thing that struck me was the layout and look of the offices in the House and Senate. Rather than the typical straight line hallways with individual office doors lining them, these were all halls leading to perpendicular halls, leading to warrens of groups of offices seemingly divided into counties. The second feature that was unique was how others were officed in committee office groupings. Apparently Maryland doesn’t just gather in committee meetings, but I take it they also caucus per county and per state region as well – very different than Texas’ federal style of simple committee caucusing.

The first office visit was with a Delegate who reminded me a lot of one of Texas’ former Reps, Debra Danburg. April represented well in her first visit. Frannie took the supporting role, feeding “leaders” to spur her district progeny to discuss other topics she’d not touched upon and gentle reminders of points overlooked. The easy rapport she had with the Delegate at the end of the meeting, with her inquiring about Frannie’s wife Pat and other personal chit-chat, discussing the campaign strategy for the following year let me know that Frannie was at ease in political waters. 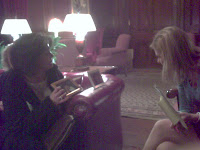 April, being new, was more frustrated with not being able to score her goal: a co-sponsorship. It’s a tough lesson to learn, especially when you’re new. We explained that it’s better to have candor as it’s someone you can have faith in – even when the answer isn’t as advantageous as you’d like. The alternative is to have someone who will lie to appease and get your hopes up, then dash them.

For those of us who’ve been in the game for years, politically reality creeps in: this particular case had a very highly-placed delegate elected in southern Maryland, not wanting to be the lead bill-carrier or co-sponsor and candidly explaining the numbers game of trying to hold another potential “R” seat in “D” hands. To neo-activists like April, it’s infuriating and may appear cowardly. But for Frannie and I, it’s part of what we’ve lived with our entire political experiences – political reality.

In fact, watching Frannie lead around the group through the two other office visits – including one with the Senate President’s Chief of Staff, Vicki Gruber, was impressive. There was nothing preachy or elitist in the manner, very informative and matter-of-fact. The irony of the trans person leading and training the new gay and lesbian and ally activists wasn’t lost on me: it took me back a decade to my own training of groups of newbie gay and lesbian activists, some of whom would become leaders themselves – even an HRC board of governors member! We may not be good enough to hire or lead, but we do know our stuff well enough to train those who will. 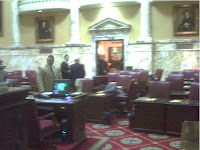 In another vein, it was also sad. While she’ll never admit it now, Frannie’s got a great manner and knowledge for things political. Only five years earlier, she was making her initial visits as part of the National Transgender Advocacy Coalition (NTAC) Lobby Days, and for whom she later joined the board. Now five years later, she’s admittedly burned out of politics. While on the board of Equality Maryland, another prominent member of a prominent transgender organization dressed her down as “crazy” to be involved with NTAC. 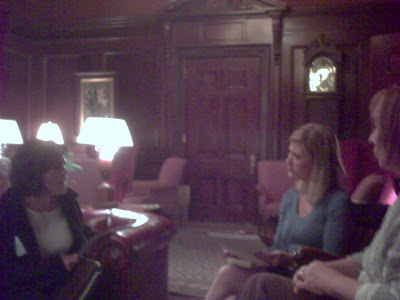 Yes we’ve long heard of “trannies eating their own” – and this was a shining example of it. All in the name of competition and winning at all costs…. As a result, what should be one of our better advocates wants nothing to do with it.

Somewhere, somehow, I can imagine JoeSo reading this and grinning from ear to ear. “One more down….” But for every one of us they knock out, two more pop up to take their place!

“They keep adding to our numbers
As they shoot my people down!” — What About Me?, Quicksilver Messenger Service

After gathering at a post-lobbying kaffeeklatch in a Senate meeting room, I got chance to meet both former and current EqMD executive director, Dan Furmansky and the current, Kate Runyon. Kate seems really nice, and very energetic – from what I could see, a good addition for EqMD.

Afterwards, Sandy Bell, Frannie and I joined Dan, Sandy Rawls of TransUnited in Baltimore and Maryanne Arnow, a trans activist from Montgomery County at the Ram’s Head for dinner. We also met up with Mara Drummond after dinner and chatted some more, before I ended up crawling back home at the crack of midnight. 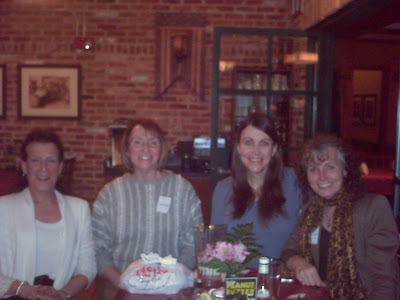 And of course, what greeted me when I got back to Gaithersburg? Snow. Again! This is likely insignificant to folks up here, but in all my life I’ve never been around this much ice and snow in such a short period of time – two and a half weeks!

Well, it’s now one day to IFGE Conference, and I have a committee meeting tonight, two interviews (one thankfully can be done at IFGE) and a board meeting I hope to be able to call in to – and plenty more still on the plate waiting to be done.

I may be unemployed, near broke and a “sunbird” up here in the land of ice and snow that causes us to shut in. Somehow this doesn’t seem like a leisurely life.