A YouTube video made some waves recently in the trans community – and not in a good fashion. In it, a black teen (or possibly young man) by the name of DGC or David parodies the Beyoncé video, “If I Were A Boy;” however, replacing the subject with “Tranny” instead of “Boy.” I’ve included a link to the video in question if you’re nervy enough to watch it. Be warned that if you’re trans, you may likely be offended.

“I wish I had more hands, so I could give those … four thumbs down!” — Dave Chappelle as “Rick James”

Just in speculating, not knowing this person, I’ll flesh out what I think I see in this: he’s a typical African American middle-class college freshman or high school senior, not really fully adult as yet, a cut, someone who likes his attention and doing whatever it takes to get it, into shock-value humor with his friends while they hang out wherever they hang out at, and probably is not personally anyone who spontaneously goes out to commit bias related violence against transgenders.

Is he transphobic? (as in someone who would panic if he were attracted to someone he suddenly found was trans): I’d guess yes. He seems like the type that would react in horror over that, and would probably lash out if he were around friends (to defend his manhood around his homies – can let them get the wrong impression!)

Bottom line, I think it was his awkward and totally thoughtless attempt at trying to be a Dave Chappelle or a Cat Williams, and ending up being no funnier than the boorish drunk at the end of a party who thinks he’s a comedian when all that he really is is offensive. He and his desensitized pals will probably laugh about it for months and brush it off to harmless fun.

And for my trans sisters and brothers in the African American community, I feel for you as I know videos such as this do not make your lives any easier (not that they have ever been).

Yet, to the “trannies” he debases with his mindless humor, it’s a very different reality. The words he sings have meanings too, and hurt and anger are the by-products for the target. It strikes me that he’s probably offended when white or other non-black folks make the same type mockery or stereotypes about young African American males for cheap laughs, which says nothing about use of the “n” word. He’s a human being with feelings, no big shock he’d take issue. But the people he sings about are also human beings, though he does his best to strip them of that humanity with this sad parody.

Further to the point, for trans people in America the fear of ridicule and even worse, violence, is very palpable. Violence happens frequently, and hate murders in our community on a per capita basis are some of the highest in the nation – especially among African American trans people! He sings “they think they had a chick, but when they saw my dick...” and references to “working the streets” and feels it has no real effect beyond humor. Tragically, “working the streets” is the only opportunity left to many trans women, especially those of color who have no way to earn a legitimate living without an ID that matches their appearance, much less the possibility of landing jobs if they are throw-away children and teens who don’t get to finish even high school! Comments like David/DGC’s anatomical reference are everyday taunts to these girls, awaiting just a hair-trigger reply to launch into something more violent.

In his description of the video, he intends to offer a sort of disclaimer: “This video was not intended to offend anyone of the homosexual or transexual community. It's just fun.”

“She had the body of a Venus with an eighteen inch surprise!” — Dude (Looks Like A Lady), Aerosmith

This video wiz may have intended it to be harmless fun. But to 30 transgenders last year (and those are only the ones we’ve heard about), that type of harmless fun may have been a contributing factor in their brutal hate murders. I can’t help but think of Amanda Milan in New York in 2000, who was confronted and teased in similar fashion about what was between her legs, and when she commented back to hold her own, Dwayne McCuller grabbed a knife from a pal, walked up behind her and slashed her in the neck. As she bled to death, the cabbies parked around New York’s Port Authority Terminal stood and clapped. Humanity …. 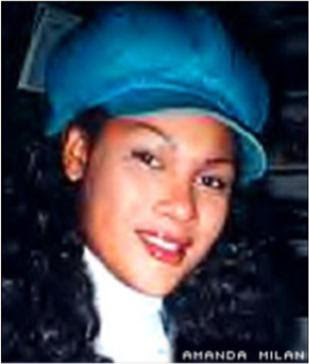 Here’s some of what the DGC/David’s video inspired in comments:

Even one person tried to feign sensitivity toward trans folks and validating her guilt by saying:

some of my really really really good friends are trannies. but honestly? i didn't find this offensive at all. because i know it's a parody, and you were going with the stereotype and playing off of that. so it was actually really funny! and really well done! i love it!

“Didn’t find it offensive at all” … “you were going with the stereotype and playing off of that” …. This is the type of sensitive commentary this stuff inspires – and from someone who’s “really really really good friends” with some of us. Hmm. Another person, responding to a comment saying the video was especially insensitive coming from a minority that has also suffered such soul-grinding stereotyping and discrimination had this to say in his defense:

wow.... i could give a huge speach about racism but i wont..... just let me say, do you think they had a choice to be black?

Indeed, there is a lot of education still yet to be done – even here, almost a decade into the 21st century! To that end, I wish I could reach the last commenter with the following link to a show a friend sent to me. This should me a must-listen for everyone: trans, family members and spouses, friends, co-workers – especially the parents, bosses, conservatives, gays, lesbians and straights alike who think this is “our choice.” This is the most recent broadcast of Public Radio International’s “This American Life.”

There are two halves to this show. So once you click the link, fast forward to the thirty-minute mark for Act II and begin to listen. It’s about twenty minutes long, more or less. After you finish listening to this Act II of this show #374, tell me … do you really think being trans is a choice?

“Homophobia is like racism and anti-Semitism and other forms of bigotry in that it seeks to dehumanize a large group of people, to deny their humanity, their dignity and personhood.” — Coretta Scott King

“And even though I know how very far apart we are,
It helps to think we might be wishing on the same bright star.” — Somewhere Out There, Linda Ronstadt from the movie “American Tail”
Posted by Vanessa E. Foster at 11:58 PM

If that video was funny, I obviously must have misunderstood the joke. Admittedly, I don't find much funny about the humor favored by the teens these days, am a very old 50, and don't comm very well with young people to start with. But that guy has no talent in my eyes, no taste, and no humor.