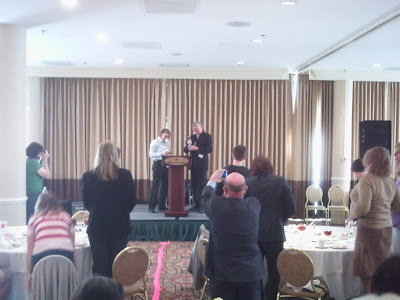 The IFGE Conference (www.ifge.org) was both an interesting and fun event this year. It was good to see some old faces, and also connect with some of my Facebook friends I hadn’t had chance to meet in the flesh. It was informative, though the presentations didn’t seem to draw many people this year. They screened a movie (unique touch) and did a grassroots organizing series as well (an important first). But due to the economy, attendance was down about 50% per reports (which makes me wonder about all our events). Not knowing the final numbers, they still pulled in around 150, maybe as many as 200 (since those not attending meals or presentations couldn’t be assessed.)

However, the last blog I posted on their board elects seemed to generate quite a buzz and overshadowed the event.

"If you're not controversial, you're not doing your job" — Clinton FCC chairman, Reed Hundt

For the record, my most recent blog wasn’t a post blasting IFGE – nor inviting such blasts from others. Other than my sudden shock at the announcement, monitoring this situation there would be in order, as I fear a repeat of the Southern Comfort Conference (SCC) debacle in 2007. This was intended to be more a bowshot to HRC to keep their greedy mitts out of our comparatively impoverished community’s events.

Nor was the post done to impugn the character of Allyson Robinson, nor invite others to do likewise. Before the IFGE Conference, I’d never met Allyson and could only speculate. During the conference, I met her while she was chatting with Bree Hartlage. Again, I expressed my concerns in my blog to the both of them. Allyson and I spoke at length and I reiterated to her that I didn’t question her motivations, integrity or morals. What I did let her know was there had been a long, consistent history with her employer, the Human Rights Campaign (HRC) – something she appeared to have no interest in – and that this was “pollyannaish” naïveté in the fervent hope that they will change. I explained to her that for the vast majority of the trans community, there is no reason to “hope” – that went out the window years ago. Our only options are to fight for change or give up. 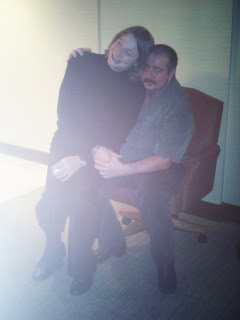 She understood my position and hoped that I’d someday amend my views on HRC. I also understood her position and what she faced, and know that someday she’ll understand what Mara Keisling, Jamison Green, Donna Rose, Kylar Broadus and even Riki Wilchins learned before her. She got a bit condescending at one point, stating, “maybe someday I’ll have your wisdom and know all that you’ve learned over the past ten years.” However, I’m sure my “naïveté” comments were likely seen similarly, so fair game. Nevertheless, as with all the above mentioned, I don’t suspect I’ll be adopting their opinions on HRC, and it’ll be them coming around to mine. Allyson even encouraged me to keep speaking out as it makes her job easier (and draws me extra reviling).

Again, I don’t believe Allyson is in HRC for the wrong reasons (and yeah, I know, she gets a paycheck, etc. – spare me.) Nor do I think IFGE has gone to the dark side simply because of the board selection. What I am fully apprised of is HRC’s guile and ability to lull anyone not vigilant into their siren’s song, leading lambs to the slaughter. And I’m loath to see IFGE led there.

In 2007 I bit my tongue upon hearing what I was to happen with ENDA very early on, and yet I was personally blasted for not warning everyone beforehand! And those few that I did explain it to (those who questioned me on my “un-Equal” sticker at SCC) actually argued with me about Mara Keisling’s speech and Joe Solmonese’s promise. Two of them (one writing a check in front of me) even went in to give HRC an additional donation!

Those are things you don’t forget, and I don’t suppose anyone will understand me on that one. You had to be there.

"Stood still on a highway, I saw a woman by the side of the road
With a face that I knew like my own reflected in my window.
Well she walked up to my quarterlight and she bent down real slow;
A fearful pressure paralyzed me in my shadow.
She said “Son what are you doing here?
My fear for you has turned me in my grave.”
I said “Mama, I’ve come to the valley of the rich
Myself to sell.'
She said “Son, this is the road to hell.”" — The Road To Hell, Chris Rea

Nevertheless, one of the things I was bracing for from my post and which I warned Bree Hartlage (IFGE Chair) about was the distancing and character assassination I’d receive – typical to all situations exposing HRC. I lived it before in 2004, and it was no slice of heaven again in 2007. One thing I’ve learned is that our community as well as the gay and lesbian community will punish those who speak truth.

Bree assured me this was not going to be the case, and that they were trying to usher in a new sense of community union.

The last two days I spent on the road trip home, but upon returning got the following response from IFGE Exec. Dir, Denise LeClair.

It's a great story, but Vanessa knew about Allyson Robinson's nomination months ago. She was the first person we contacted when we vetted Allyson, but she waited until after our elections to raise an alarm. Vanessa was attending the IFGE conference as my guest when she posted this tantrum. Who blindsided whom?

This is absolute falsehood: I found out at that luncheon announcement – thus the reason I went to Ethan to verify this was the same Allyson Robinson. Even the logic – that they somehow vet board members through me first, especially since I’m on a completely separate org – hyperbolically stretches the imagination. They may have known this for three months, but I never heard a peep. I can see HRC doing things like that, but I don’t expect that kind of fabrication from IFGE.

It's ironic to be accused of collaborating with HRC, when IFGE is the ONLY national trans organization that has been refused a seat with Joe on the National Policy Roundtable (NPR). NTAC, NCTE, and NGLTF are all there. Why is that? None of the major GLB (or for that matter T) organizations in Washington DC will give IFGE the time of day, let alone funding. 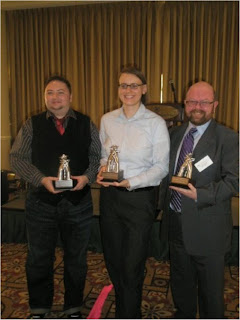 A histrionic rant to be sure – where does she see my speaking of their collaboration with HRC? HRC is working with Mara on this year’s lobby day, and Bree Hartlage did mention “partnering” with NCTE and coordinating their next conference around NCTE’s next lobby day. But I did not prognosticate that HRC would work with NCTE next year, nor did I even mention the coordination with NCTE next year. That’s a little too flimsy to suggest a collaboration! And why the reference to “a seat with Joe on the National Policy Roundtable (NPR)”? I don’t know. The NPR was created in 2000 by NGLTF, not HRC. HRC as well as NTAC were two of the original invitees to the Roundtable, with NTCE joining in 2004. While NTAC used to “get the time of day” from GLB groups until 2002, that stopped once Mara hit town – and not due to anything on NTAC’s part. Funding? That doesn’t happen for any Trans groups except Mara’s.

If Denise is inferring that NTAC or I are responsible for IFGE not having the open door with GLB groups, or being on the NPR, then she’s barking up the wrong tree. In fact, the very same Mara Keisling they’ll partner with sits on the Members Committee of NPR – the group that establishes the policy for whom to allow in, and rules for members to follow. They should be inquiring of Mara why they’ve never been allowed on.

Denise even admitted later that “we were all aware from the onset that Allyson's nomination would be controversial, Allyson is not that naive and neither am I.” So why this reaction if they knew it would be a controversy, and insinuating that I created it?

In point of fact, Allyson was nominated by Ethan St. Pierre, one of HRC's most passionate critics. HRC had nothing to do with her nomination, or election. It happened despite them, not because of them. You can't throw a stone in DC without hitting someone from that organization, and any national organization that says they don't work with HRC is not being honest. The difference is that we don't lie about what we do.

If I read that first part correctly, that makes me more at ease knowing HRC was trying to stop Allyson from joining the board. Perhaps that’s what Ethan was seeing that none of the rest of us could see. I’d sensed we’d have another defection from HRC before year-end, and maybe this is it. Allyson didn’t give me that impression in our conversation, though. I’m skeptical of her leaving behind a job for the board position.

However, I don’t know why Denise put out the last part of the statement that “any national organization” not working with HRC is lying about it. IFGE is in DC. What is that saying?

And I think everyone knows better than to believe NTAC “gets the time of day” from HRC.

“To be misunderstood can be the writer's punishment for having disturbed the reader's peace. The greater the disturbance, the greater the possibility of misunderstanding.” — literary critic, Anatole Broyard
Posted by Vanessa E. Foster at 11:22 PM