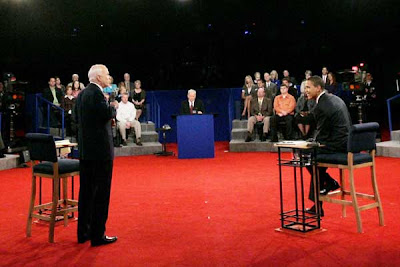 "Girls were girls and men were men.
Mister we could use a man like Herbert Hoover again.
Didn't need no welfare states.
Everybody pulled his weight.
Gee, our old LaSalle ran great.
Those were the days!" — Those Were The Days (Theme From All In The Family), Carroll O'Connor & Jean Stapleton

"It takes skill to be real, time to heal each other
And although it seems heaven sent
We ain't ready, to see a black President...." — Changes, Tupac Shakur

Unless I’m mistaken or if something really catastrophic occurs between now and election day, I believe we may have just seen the tipping point with last night’s debate. At one point, I felt like I was watching a caricature performance between Don Rickles’ Mr. Warmth and Lionel Jefferson of All In The Family.

Even though this was the so-desired “town hall” format that John McCain had been begging for throughout this campaign, this was not McCain’s night and really undistinguishable from his last debate performance. His body language was robotic and forced unless he was sitting on the stool, at which point he had an unusual, almost-feminine posture (which was a little unnerving). Most of the latter part of the evening he didn't sit much, seeming uncomfortable or maybe nervous.

Contrast this to Barack Obama's posture which was more relaxed but attentive, legs akimbo, almost resembling one of the early-60's Kingston Trio sitting on the stool (I don't know why I got that visual). He was his usual unflappable self, and it became clear that even though this was McCain’s element, Obama was beating him on his home court. 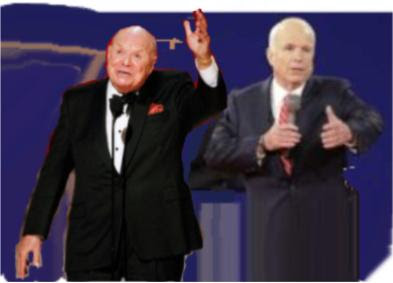 For his part, McCain stalked around the forum floor in a stiff awkward fashion, tossing out barely-veiled insults in wisecrack fashion, replete with feintly audible septuagenarian grunts and breathing. His movements, his speech and even his appearance resembled Don Rickles walking the stage in his HBO special Mr. Warmth. It’s the type of thing you expect when you plop down $25 for a ticket to sit and watch epithet-laden comedy with a top-notch comic. McCain’s humor (if that’s what it was) just didn’t come close to matching Rickles’ timing, much less his joke material.

McCain was the only one chuckling at his too-subtle witticisms. It was the caustic tongue of Rickles without the humor, rather hard to watch.

Obama meanwhile was on point throughout most of the debate, with a few lapses into generalities. As for substance, it was a hands-down win for Obama. He was thoughtful and specific on responses and plans to address the issues brought up in question. He sat smiling through the entire evening, listening (or at least appearing to listen) intently a la Lionel Jefferson to McCain playing Rickles portraying the Archie Bunker role. Unlike the last debate though, this version of “Lionel” Obama had more of an edge and sparred with “Archie” McCain. In the end though, he was still abundantly patient and polite, complete with the headshakes and incredulous smiles with a few smirks as well.

McCain had very little in specifics, sticking mostly to his campaign talking points. While his town hall format didn’t fit his desire to come out swinging on character issues by association, he still took every instance he could to take swipes at Obama’s judgment and inexperience. McCain’s performance even seemed a bit contrived. If anything, for the man who accused Obama of not knowing the difference between tactics and strategy, McCain didn’t appear to have much thought given to strategy.

At one point, when moderator Tom Brokaw asked McCain if he was in favor of Manhattan Project styled approach to new energy technology, McCain gave a one sentence response to it and then launched into defense on Obama’s charges that McCain didn’t support legislation for new technology development. To prove it, he pointed out a billion-dollar bill for Big Oil urged by Bush and Cheney that McCain himself voted against (way to play to your base, Mac!) but for which “That one” – pointing to Obama – voted in favor.

Media and viewers seized upon “That one” across the country – a very objectifying move on McCain’s part. It was a too-sublime attempt at humor that came off very dismissive instead.

The tipping point came nearer the end of the debate when the issue turned to foreign relations, specifically Pakistan. Again McCain ridiculed Obama’s mention of crossing into Pakistan if actionable intelligence had pinpointed Bin Laden, and compared his plan to Teddy Roosevelt’s “walk softly [sic] … but carry a big stick.”

Obama pushed for opportunity to respond to McCain and again explained his position on going into Afghanistan, then added, “Sen. McCain suggests that somehow, you know, I'm green behind the ears and, you know, I'm just spouting off, and he's somber and responsible,” to which a smug McCain smiled broadly and replied “thank you very much!”

Then Obama made a masterful play, noting of McCain: “this is the guy who sang, "Bomb, bomb, bomb Iran," who called for the annihilation of North Korea. That, I don't think is an example of "speaking softly." This is the person who, after we had – we hadn't even finished Afghanistan, where he said, "Next up, Baghdad." 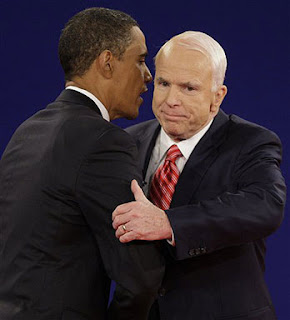 McCain’s smile fell off immediately, and he glared straight ahead. He walked right into that trap and got shot with his own weaponry. Check and mate! McCain’s attempt to address Obama ended up in a stuttering, diffuse attempt at explaining himself and explaining away his gaffe – “I was joking with a veteran” – and ended up with an almost pleading repetitions of “I’ll act responsibly” and “I’ll get Bin Laden”.

In a sense it was sad to see what he’s devolved into. Yet after all of his initial promises of “running a respectable campaign” and then later rescinding it since “Obama wouldn’t meet as he promised in a town hall format,” now that Obama was meeting with him in a town hall format it was the same old ugly, combative McCain – no change. And he wasn't even an effective combatant. Obama deuced him on his own game, and McCain was helpless.

Worse still, even with the economy plummeting like a boulder over Yosemite Falls, John McCain once again failed to mention the middle class, the working class or the poor even once. He's now just playing to save his base and his base isn't big enough to get him into the White House.

We’ve now come to the point where it’s truly Obama’s game to lose. Seeing how he’s played to date, he won’t! Now we need to ensure he has all the down-ballot support in Congress that he's going to need instead of the obstructionist Republicans!

"High time we made a stand and shook up the views of the common man,
And the lovetrain rides from coast to coast.
D.J's the man we love the most.
Could you be, could you be squeaky clean
And smash any hope of democracy?
As the headline says you're free to choose
Theres egg on your face and mud on your shoes." — Sowing The Seeds Of Love, Tears For Fears
Posted by Vanessa E. Foster at 8:20 PM

When's the last time you were a designated-hitter for the Yankees or Sox?