So you thought it was crazy enough that we’ve had runs on the bank induced by Wall Street institutions financially built on a house of cards? You think it’s beyond belief the our illustrious president was brazen enough to ask Congress for a $700 billion check, payable by the taxpayers for this financial fiasco he’s allowed to run rampant after all these years of lies about the economy being “fundamentally strong”? You reckon this insanity will end when the people have their say, only to realize Bush is going to yet again strong-arm Congress-critters of both parties into force feeding this to us with a front-loader?

It’s enough to cause a citizen’s revolt – and a lot of people are emotionally there, now!

Well, here’s a little comforting thought for all you Wall Streeters (provided you weren’t already informed of this well before hand). U.S. Army troops will be on guard, here in America, to help patrol our cities! True.

Our Armed Forces will be deployed right here in the good old U.S.A.! Coincidental, eh?

“Now the first thing I noticed when we hit the street was the seventh fleet
They was cruisin' through the center of town. (Quite peculiar.)
No one seemed real clear 'bout who’d sent them there
But they sure looked grand with the band, the balloons and the clowns. (I love a parade.)
And the played "Anchors Aweigh" for the rest of the day
'cept the times that they'd lower their guns and shoot some renegade down.” — The Ballad Of The Night The Clocks All Quit (And The Government Failed), Tonio K.

Beginning October 1, 3rd Infantry Division’s 1st Brigade Combat Team “will be under the day-to-day control of U.S. Army North, the Army service component of Northern Command (NorthCom), as an on-call federal response force for natural or manmade emergencies and disasters, including terrorist attacks.” There was a nice, breezy article on it in the September edition of Army Times: http://www.armytimes.com/news/2008/09/army_homeland_090708w/

For the next sixteen months or so, they “may be called upon to help with civil unrest and crowd control or to deal with potentially horrific scenarios such as massive poisoning and chaos in response to a chemical, biological, radiological, nuclear or high-yield explosive, or CBRNE, attack.” They’ve been training for this new “domestic deployment” for the past month in Fort Stewart, GA, and will even be coordinating with other branches of the Armed Services, including National Guard.

Indeed our soldiers will be utilizing “the first ever nonlethal package that the Army has fielded,” 1st BCT commander Col. Roger Cloutier was quoted in the article. This refers to “crowd and traffic control equipment and nonlethal weapons designed to subdue unruly or dangerous individuals without killing them” according to the article.

“I don’t know what America’s overall plan is – I just know that 24 hours a day, seven days a week, there are soldiers, sailors, airmen and Marines that are standing by to come and help if they’re called,” Col. Cloutier said. “It makes me feel good as an American to know that my country has dedicated a force to come in and help the people at home.”

The article notes that the deployment “marks the first time an active unit has been given a dedicated assignment to NorthCom, a joint command established in 2002 to provide command and control for federal homeland defense efforts and coordinate defense support of civil authorities.” Thanks, Patriot Act!

"Yes it was lookin' real bad, any luck that we'd had
Had been lost in the park after dark when the army arrived.
They was sweeping the town chasing renegades down
There were no friends to be found, there was no place at all left to hide.
And the Austrian son he was having some fun
He'd been put in command of all the camps and his prisoners all died.” — The Ballad Of The Night The Clocks All Quit (And The Government Failed), Tonio K. 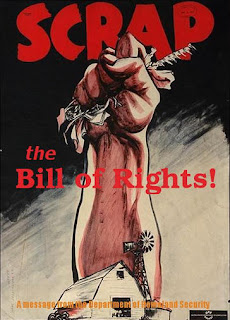 It also defies the Constitution. Per Section 1385 of the Posse Comitatus Act:

“Whoever, except in cases and under circumstances expressly authorized by the Constitution or Act of Congress, willfully uses any part of the Army or the Air Force as a posse comitatus or otherwise to execute the laws shall be fined under this title or imprisoned not more than two years, or both.” Basically, the Army is not supposed to be utilized for national policing actions: the National Guard is. Keep in mind though, individual governors are the responsible parties who make the decision to use National Guard troops – not “the Decider.” They’re also deployed intrastate, as a rule, so Louisiana’s governor’s National Guard don’t just patrol the entire Gulf Coast on police actions in Florida, for instance.

Now there is one instance where the President can deploy troop, per the Insurrection Act of 1807. But for this to occur, there must be existing conditions in a state or region where “any part or class of a people is deprived of its right, privilege, immunity or protection” per the Constitution and where the states “are unable, fail, or refuse to protect them.” Basically this means the states have to be overrun to the point where the police at local and state levels are overwhelmed to the point where the governor must call the National Guard out, which then also becomes overwhelmed. If it gets to that point, and there is an insurrection involved (again which neither the local law enforcement or National Guard can deal with), only then can the President order the Armed Forces in.

Republicans did water down the Insurrection Act with a bill introduced by Sen. John Warner, and enacted in 2006. This was rescinded a year later as Sen. Patrick Leahy (D-VT) and Kit Bond (R-MO) as they noted it made it easier for the President to simply declare Martial Law.

So, here we are, with America’s Armed Forces now on the new front: America. And just in time for … the Government’s nationalizing Wall Street and using our tax money to pay for it! I guess Bush-baby figured we weren’t gonna be very happy about the Wall Street Welfare State (WSWS) Bill. We gotta protect that “part or class of a people” that’s “deprived of its right or privilege,” ya know? Like the corporate, upper class …. 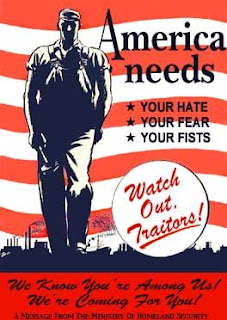 Or maybe there are other reasons Bush-baby brought them in. Maybe they sense what’s about to happen here! What could it be? More bank failures and runs on the banks even after the WSWS Bill? Stolen elections? Maybe ratcheting up the race-baiting thing they’ve been working on? Maybe even a terror attack on the country? (This is October, month of the “surprises” in RNC-land.)

What do they have in mind for us? Even Col. Cloutier, the brigade’s commander doesn’t know. All I know is it’s another one of those “number” days (10/9/08) next Thursday, and I know how these planners like their numbers. Just be careful and stay safe.

This may well be a very harrowing month. They’ve already planned on it.

"The terrorists never stop thinking of ways to harm our country. And neither do we." — President, George W. Bush

"Bright and early next morning without any warning
The sky opened up and the Boss stuck his head through the clouds.
The Army and Navy they opened up fire
But he grabbed him that lightning and laid them all under the ground.
Sam jumped up to salute; the Boss said "that's real cute,
But it's a little bit late 'cause I've seen what's been going down." — The Ballad Of The Night The Clocks All Quit (And The Government Failed), Tonio K.
Posted by Vanessa E. Foster at 9:25 PM

Vivid, Vanessa!
You really should write a screenplay (no disrespect)
Check out the "novel based on facts" "IMPLOSION" by former worldBank guy, Peter Koenig. The sickening facts about the international capitolist conspiracy (say, i just saw PIRACY in there!) and it's eventual "Implosion" a word I heard on MSNBC last week for the first time. It's subtitled: "An Economic Thriller About War, Enviornmental Destruction, and Corporate Greed"

Please visit my blog for a brief recuperating mental vacation. then get back on the front lines. Goddess-speed!