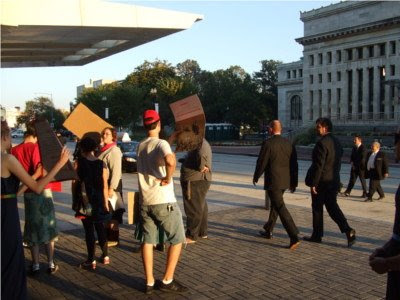 “A dip in the pool,
A trip to the spa
Endless days in my chaise
The whole world according to moi ….
I want fabulous,
That is my simple request,
All things fabulous,
Bigger and better and best,
I need something inspiring to help me get along,
I need a little fabulous is that so wrong?” — Fabulous from High School Musical 2

Sometimes you don't get it right, and that happened to me the other day. Joe Biden was the planned speaker for Saturday night's grand gala for the Human Rights Campaign (HRC). Biden attending the national gay event was, for many of the transgender Barack Obama supporters throughout this campaign while HRC was lavishing Hillary Clinton with their funds and support, one of those upsetting "gotcha" moments that folks at HRC thrive on -- anything to drive at least some of the enemy trannies into an obsessive rage.

Unfortunately for Joe Biden, his mother-in-law passed away after complications from a long illness and he had to cancel the event. My apologies and condolences go out to the Biden and Jacobs families for their loss.

But as Ed Sullivan would say, "the real big shew" went on nevertheless, without their biggest star draw -- or rather, politico draw as it was in DC, Hollywood for the corporate power set. Doubtlessly they were disappointed. All I can say is ... Karma! Couldn't happen to a more worthy bunch of folks!

I'm sure there were a few tears in their Christal that evening. You know, since HRC's good friends with Log Cabin Republicans and the Log Cabin Republicans have endorsed and have visited with John McCain, and there's a plethora of high-dollar heavy-hitters at their galas who are affirmed Republicans, and since John McCain is known to take the weekends off rather than campaign and since he supports equal rights for gays and lesbians and same-sex couples, just not marriage (as Sarah Palin noted in her VP debate last week), I'm wondering why JoeSo didn't have some strings pulled to bring John McCain in to speak? Maybe he could've come up with some good jokes about foxholes or something.

In fairness, it wasn't just a bunch of folks sitting around looking at each other in tuxes and gowns. They still drew in Jennifer Hudson to sing to the crowd, and Suze Orman the ever-so-out financial guru was there. Considering the recent bloodbath in the stock market, I'm thinking she was likely a much more apropos guest to have. ("What's happening to the market?!? Where do I move my portfolio -- sob!?! I can't be a poor slob like those protesting trannies out there!!! Waah!!!)

Speaking of protesting trannies, it turns out there was a crew outside after all! The in-town NCTE folks weren't there. Board member Dana Beyer was inside the banquet as she was a Table Captain -- aye, aye! And Executive Director, Mara Keisling was in Atlanta for Southern Comfort Conference.

However Bash Back! (including a number of the folks that we had join us last year) were out on the street, getting the truth out there and making us all proud! They even continued the Equali_y and "Not Equal" theme on the signage as well!

Per the report from BashBack!:

On Saturday, Oct 4, the so-called Human Rights Campaign(HRC), a wealthy and mostly white Gay group, held their annual $250 a plate dinner. Since HRC is doing NOTHING for Transgender folks and other less-wealthy members of the GLBT community, Bash Back! held a protest outside their dinner.

That $250 a plate could feed a HELL of a lot of transgender street kids for the cost of just ONE of HRC's high priced dinners.

This is at least the second year in a row the HRC's convention has been met with protest by trans advocates. 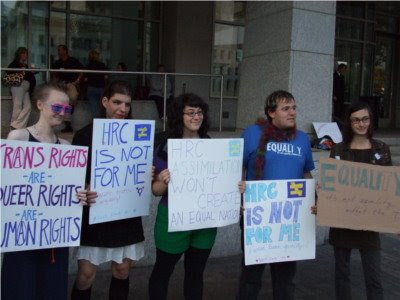 HRC may at some point end up winning their special rights for themselves and try to feign this concept of "equality". But the spirit of the trans community won't die, and folks like BashBack! will always be there to pick up the torch and continue.

"And blessed be the children who
fight with all our bravery
'til only the righteous stand....
You fight in all our names
For what we know is right.
And when you all get shot
And cannot carry on,
Though you die, La Resistance lives on." La Resistance Medley from South Park, The Movie
Posted by Vanessa E. Foster at 1:00 AM