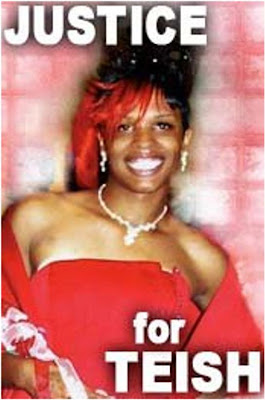 "Just waking up in the morning, gotta thank God.
I don't know but today just seems kinda odd....
Plus nobody I know got killed in South Central L.A.
... Today was a good day." – It Was A Good Day, Ice Cube

As I intermittently work on this blog the day before the trial begins for the murder of Lateisha Green (fka: Moses Cannon), I'm thankful for a few things. First of all, the District Attorneys appear to be taking an aggressive approach to prosecuting this case. This is much better than many cases where trans victims of murder are African American, or to a slightly lesser extent other ethnic minorities. The second thing I'm thankful for is that Teish, as she's referred to by friends and family, has a family that loved and supported her death after her death as well as (to what extent I can tell) before her murder as well. Teish's family are actively involved in monitoring and pressing for justice for her.

That latter fact – the family's involvement – cannot be dismissed. In all of the cases I've noted over the decade plus of hate crimes our community has lived through, the supportive family – especially parents who refuse to accept dismissive investigation and prosecution – make the most notable difference in successfully bringing these cases to light and to justice in the court system.

Additionally, I'm happy to hear that there is a good amount of pre-trial publicity getting out there, thanks to the initial work of the TransGriot blog by Monica Roberts (one of NTAC's co-founders and former board members). Additionally there's some of our folks on the ground to monitor and tweet the ongoing court proceedings: both Gay & Lesbian Alliance for Anti-Defamation (GLAAD) and especially the Transgender Legal Defense & Education Fund (TLDEF) will be there. Having our watchers there is a reminder to the court and prosecutors to keep it on the up and up.

Another thing I'm grateful for is that her killer was known, and quickly tracked down and arrested. Far too often, most especially in cases where it's a trans woman of color who nearly always gets the automatic presumption that "she was a sex-worker" from authorities, there is a rather lax attitude about bringing their murderers to justice.

Murders aren't only illegal if they occur to non-minority, and especially non-trans people. It's supposed to be "blind justice." We're taught to expect "equal justice" in our democratic system. Far too often, we get neither. Why is it that our community and our families are practically required to ride herd over the investigative and judicial process in order to ensure no apathy that sets in?

At least the tools are in place to make this a successful prosecution for justice. The DA's office has even filed hate crime charges against Teish's killer. That said, I'm fairly certain that hate crime violations will be sacrificed in order to get a full sentence for the murder.

It's not that I don't believe there was no hate crime committed – there was. The problem is that New York State's hate crime coverage for transgender victims. As I learned from Houston's Harris County's D.A. office years ago, prosecutors will not push for charges or convictions on laws that aren't explicitly on the book (as is the case in both Texas and New York).

The reasoning as explained to me, beyond Texas' conservative narrow-minded approach to law, is that if there is a charge and eventual conviction on a law that isn't explicitly on the books, it opens the door for challenging later in a retrial. All it takes is a sharp-eyed defense attorney (or even a jailhouse lawyer who has nothing better to do with all his incarcerated time than to file challenges, and sometimes effective ones.) Nevertheless, I see it as a good strategy to use this now at this stage of the trial, especially if they can get a solid plea deal from the defense. It indicates the D.A. in this case wants to send a message that a victim who is Trans deserves the same level of sentencing that a non-Trans victim would.

And therein lies my beef. New York has had over six years since SONDA and the infamous "promise" form Empire State Pride Agenda's then-executive director, Matt Foreman (who shortly thereafter escaped to a nice reward: Executive Director of the National Gay & Lesbian Task Force - NGLTF). In the years since, that promise (to place GENDA and Hate Crimes on the forefront of ESPA's agenda) has been of as much value as a three-dollar bill.

These rights should've been extended by now in so-called "liberal" New York. But they haven't. It sends the country a clear message: their Trans citizens are less than everyone else in the Empire State. Trans people are not human (or certainly not human enough to be covered by their human rights laws)! The bottom line is this: New York's legislators are being either lazy or cowardly, or a combination of the two. And every year that passes since their executive director Foreman's promise helps further cement ESPA's legacy of unconcerned deceit.

If they don't like it, do something concrete to address it. Otherwise, live with it.

Now I'm fully aware that not all groups support Hate Crimes bills. The Sylvia Rivera Law Project came out with a statement earlier this year declaring their opposition (not a misprint) of the GENDA bill as it included hate crimes enhancement provisions, which they oppose. In one sense, I can understand their position.

However they also overlook one glaring point: there is no parity in sentencing in general. It's especially so when the victims are non-white, and most certainly so when the victims are transgender women who typically have their lives completely debased, sliced, diced and offered up to the point of virtually slanderous claims of lascivious prostitutes and sexual freaks while the defense is cross-examining and pressing the defendant's case (which is what they get paid to do). Other than the Angie Zapata trial, there has rarely if ever been equitable sentencing for those convicted of murdering Trans women. And to believe that there is no difference between a simple murder of a Trans woman (such as over a debt or a simple quarrel) and the murder of a Trans woman because of the homo- or transphobic connotations – not to mention the perception by many in society, even in New York's legislature – that we are lesser human creatures, tacitly implying that no one will care for us simply strains the limits of credibility to its break point.

Until there is equitable sentencing, until there is equal consideration for the lives of all victims regardless of race, class or Trans status, until there is demonstrated action in treating murderers of Trans women or Trans men as the murderers they are, and not allowing the a bit of leeway because, "hey! She's just a tranny, probably with a sordid past and who cares about them?" ... until we reach that day where I don't have questions about the message they send to all of society about us by their light treatment of our victims, I'm firmly standing on the side of enacting hate crime coverage for gender identity, and prosecuting to enhance it everywhere it is applicable.

And if people have problems with it, well ... there's a simpler solution! Simply work to dismantle all other coverage for hate crime enhancement based upon race, religion, gender, sexual orientation and the like! See if you don't get a rise out of them when you attempt this! And explain to them that it's an unfair law, and ask their sentiments on whether or not they feel sentencing has always been just when their own community was attacked in such incidences.

Meanwhile, we're mourning in America. Yet another young, unrealized potential ... another African-American woman who happened to be Trans ... is gone. And it's just one more name on the litany of lost lives among Trans women of color. Something needs to be done to stop this pattern of hate and violence.

Doing nothing and accepting things as they are just isn't going to cut it. I'll care about our attackers sentences or the hurt feelings of legislators or our political leaders once they first start caring about the sanctity of our lives.

"Here's another point in life you should not miss:
Don't be a fool who's prejudice,
Because we're all written down on the same list." — It's Like That, Run-D.M.C.
Posted by Vanessa E. Foster at 8:46 PM