The 3 R's in Mass.: Rights, Religion And Restroom Fixations 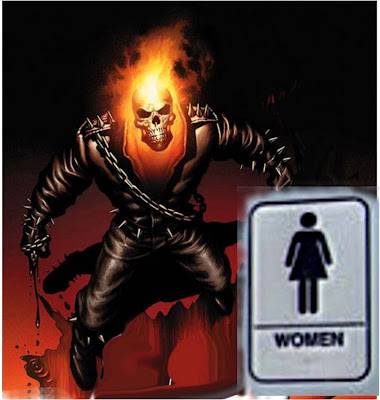 "After complaints that there was a man in the woman's bathroom, a bouncer approached her stall and asked Ms. [Khadijah] Farmer to leave. The masculine lesbian has now filed a lawsuit ... to stop "sex stereotyping in public accommodation." After all, the toilet should not see gender, but flush feces with fairness.

[I]f you dress like a dude and alter your appearance so you look like one, you run the risk of people taking you for something you're not." — Greg Gutfeld, host of FOX News' Red Eye with Greg Gutfeld

Yesterday the state of Massachusetts had public hearings again regarding their non discrimination bill covering "gender identity or gender expression" pending before the legislature. Numerous Trans community members and their family members testified (and a special kudos to Ellen Hurn for her courageous testimony!)

Nicknamed the "Tranny bill," the "Bathroom bill" and "an important part of the Homosexual Lobby's agenda," the bill in this "most liberal state" as Rep. Barney Frank denotes has gotten national attention from the 19th century-minded groups and their press vehicles.

The Massachusetts Family Institute (MFI) has begun running radio ads warning mothers that they may no longer want to let their young daughters use public restrooms because "Beacon Hill is about to make it legal for men to use women's bathrooms."

"There's no restrictions in this bill as to what opposite gender can use the facility. We're not going to be able to police this," said Kris Mineau, president of MFI. "There's no pre-requirement of surgery or appearance or anything else."

Mineau said the bill would make it easier for the thousands of registered sex offenders in Massachusetts to gain access to children and women in public restrooms by claiming they are transgender.

Clearly there are a number of flaws in Mineau and MFI's convoluted logic. Foremost is that sexual predators tend to hang around where children congregate – places like parks and game rooms, the malls or adjacent to school grounds. Since when did America's daughters start hanging out at the public restrooms? Typically they are preyed upon when their defenses are down, and to do so, predators have to find situations that are sublime and seemingly innocent, such as being approached by the adult male in a park or near the school looking for a lost dog, or in a mall asking for directions to a store.

How sublime and disarming do they think it will be for their daughters to be approached by an adult male in a women's restroom and have him "get the drop on them?" Seriously?

Additionally, If they're felonious sexual predators, then being genteel about appropriate restrooms is the last thing weighing on their mind. If they're in the mood to commit such an act, then a "Ladies" sign or a female silhouette icon on the door won't be stopping their quest: Trans identity my ass! It'll be "damn the torpedoes and full speed ahead!"

If they're so concerned about sex-segregating the bathrooms to the Nth degree as per their birth certificates regardless of what gender someone presents as in public, then where does this end? Will we now need laws declaring male and female bathrooms in every home in America? We can't use the same restroom! Oh, that's right! It's family! There's no such thing as family incest or molestation, is there? Yeah, right!

And since it's the parks, game rooms and malls that attract both young daughters and those sex-offenders following them waiting for an opportunity, will sex-segrated malls be next? How about sex-segregating parks and playgrounds too? Don't want men around those places. There have even been infrequent incidences of daughters being molested or being preyed upon where people pray! As in churches! So should we also begin sex-segregating churches in order to keep daughters as far away from all men as possible? Lord knows there's a higher occurrence of these incidences from "men of the cloth" and Sunday School teachers than there are with Trans women. If it's a potential threat, segregate them all stringently beforehand – don't wait!

With all this segregation by the sexes, maybe the orthodox Sunnis in Saudi Arabia are onto something with that concept of "only men" and "only women" in various public functions. Perhaps America's family associations need to look to them for successful models to follow?

"Who is a hero? He who conquers his urges." — the Talmud

Another little kink in their seemingly impeccable logic on concerns of "men in restrooms" identifying as Trans women: we're on hormones! No, I'm not talking about crying jags or getting emotional ... think back for a minute. Back in the day, they used to prescribe estrogen as a kind of "chemical castration" for those who used to be convicted of first- or lesser offenses of sexual violations. The reason was simple: it greatly tamped down the male libido (as well as other feminizing side effects).

So now that there are male-to-female transsexuals and pre-ops who have self-castrated, chemically speaking, what is it these MFI types think we're going to get the notion to do in the public restrooms? Sex? From our over-nourished, female-hormoned "male" libidos? Really?

Instead they insist upon these female-appearing folks going into the men's room. Where their young sons may well be. That'll be an interesting conversation! At the same time, folks like Ethan St. Pierre (below) will be forced to use the women's room. Yep, this is what the conservatives want to push into the women's room with your daughters: take a peek at what this will look like! 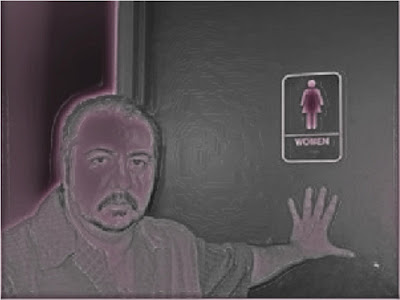 Of course the Big Gay Man on the Hill, Barney Frank, isn't anywhere to be found on this bathroom discourse. He's not been very helpful to us on this subject in the past, and now that the current Congress is gearing up for Don't Ask, Don't Tell (and that touchy subject about shower usage amongst G.I.'s straight and gay, it's a subject he'll avoid at all costs about now.) But it begs the question: when sexual orientation discrimination was outlawed, was there a sudden surge in bathroom predators stalking kids in public restrooms? Nope? So much for that big fear about nothing ... maybe Trans rights will bring the same results, ya know?

"And you knew who you were then!
Girls were girls and men were men.
Mister, we could use a man like Herbert Hoover again!" — Those Were The Days (Theme Song for "All In The Family") sung by Jean Stapleton & Carroll O'Connor

Not to be outdone by restrooms, Timothy Tracey, a lawyer with the conservative Arizona-based Alliance Defense Fund, told members of the Committee on the Judiciary that the bill infringes on the religious rights of those who believe that men and women are different.

"The First Amendment mandates that no individual should be required to affirm, in act, word, or deed, that a man is a woman, or a woman is a man, against their sincerely held religious beliefs," Tracey said. "Yet this is precisely what (the bill) will do."

Mr. Tracey's obviously a sharp-eyed trial lawyer, but a crock of crap is still a crock of crap no matter who serves it up. There is nothing in this bill taking away his freedom of openly worshiping how he pleases, which is what the First Amendment covers. I'm unsure what religion it is that worships men being men and women being women, but rest assured that they will still be able to openly declare that they worship men being men and women being women after this bill is passed!

Meanwhile it will also ensure that those to don't believe in people who change gender or accepting them shall not abridge the beliefs and acts of other religions who, as Jesus noted to his disciples that "the call isn't for everyone" and, indeed, even eunuchs (both those born in the womb as so, and those castrati of that era) could follow the call – could follow Jesus. Some people actually believe in all of Jesus' teachings from the Four Gospels and wish to respect that, even if the folks Mr. Tracey represents wish to ignore and deny His words.

Some people believe in the Golden Rule: treating others as you would wish to be treated. Mr. Tracey represents folks who eschew that. No matter. It only means that the folks Mr. Tracey advocates for don't deny ability for others to worship and believe as they do, where everyone should be treated as equals without full considerations for a special group, and lesser considerations for the others left out. Mr. Tracey and others can continue defying the Golden Rule as per their religious beliefs.

This stuff really gets exasperating. It's amazing the lengths to which people will go to not only validate but to keep their irrational fears enshrined as the law of the land. Miscegenation, women as lesser humans, slavery, even mistrust of other different religions, all these things used to be controlled by laws of the land because of phobia: fear that those in power just cannot get beyond.

Let's hope this time that fears once again will not triumph over the courage of doing what's right. Lord knows that in this "most liberal state" in the Union, courage by even liberals in their own bastion has been in preciously short supply.

"If I were King of the Forest – not queen, not duke, not prince –
My regal robes of the forest would be satin, not cotton, not chintz.
I'd command each thing, be it fish or fowl....
Though my tail would lash, I would show compash
For every underling!
If I, if I ... were King!" — If I Were The King Of The Forest sung by Bert Lahr as the Cowardly Lion of the "Wizard of Oz"

"It is curious that physical courage should be so common in the world and moral courage so rare." — Mark Twain
Posted by Vanessa E. Foster at 8:46 AM