It's Marriage Mania In Maniacal America

Maybe it's just the unending heatwave in Texas, where any day below triple digits actually feels slightly chilly, but it seems to my overcooked brain that both sides on this same-sex marriage tug-of-war are coming down with a chronic case of the wackies. Or maybe it's just a sizzling hot summer everywhere and it's not just me – everyone's losing it.

Marriage mania is in full bloom, and Pennsylvania joined the litany of states pushing for marriage recognition for same-sex couples. Amazingly marriage didn't get forced down the throat of President Barack Obama when the 300 some-odd LGBT leaders and their partners were invited to the White House for a private reception. However, just this week both Massachusetts and Oregon filed suit claiming the Feds violate their federalist states' rights by DOMA's effect on their states' ability to make independent decisions on marriage rights.

Meanwhile the California suit against the Feds has gotten interesting. Initially when this was filed (including one attorney who offered to press the issue who was also part of the Bush legal team who filed suit successfully to place Bush in the presidency post-Florida 2000 election results!) it was thought that things were looking rather rosy. Even LGBT organization heads from groups such as Lambda Legal, the ACLU's LGBT Rights Project and the National Center for Lesbian Rights all stepped up and encouraged all other groups to take a back seat in order not to complicate or jeopardize the pending suit. "Ill-timed lawsuits could set the fight for marriage back."

Well that was then. This is now. It seems these same three groups are now filing amicus briefs to intervene to allow PFLAG, Lavender Seniors of the East Bay and Our Family Coalition to file suit with the Supreme Court as well. (And they all thought we Trans folk couldn't get on the same page or being politically "realistic"!

The American Foundation for Equal Rights (AFER), who was leading the charge in Federal Court, wrote a pointed letter back to the three above mentioned groups, noting how they had all initially worked collaboratively on the project and anguishing over actions and quotes in the media from these other players that they felt "undermine" the case and the goal which they were all working towards.

Not only were they there first on this suit, AFER worries that this case "could be mired in procedurally convoluted pre-trial maneuvering for years—while and gay and lesbian individuals in California continue to suffer the daily indignity of being denied their federal constitutional right to marry the person of their choosing." I've attached a photocopy of the full letter from AFER to the parties below. It's, um, interesting: 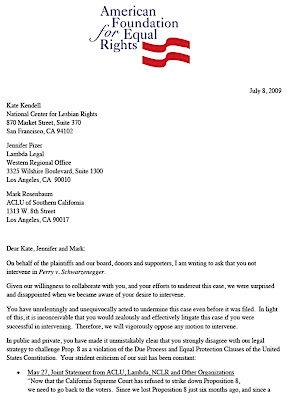 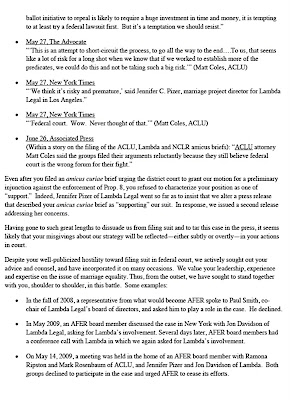 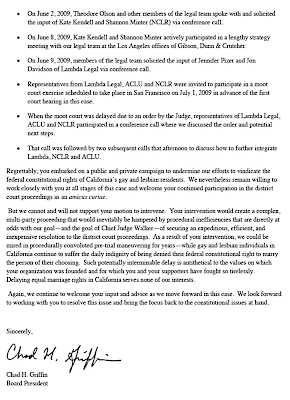 So what are they trying to do here – out-compete each other for top attention and ego strokes? Or maybe bog it down in order to slow the process (and maybe milk more donations while it continues?) No matter! At least everyone's on the same page and it's all in the firm capable hands of our professionals in leadership of the gay and lesbian community! Lord knows if Trans people got a hold of it, it'd be a confusing mess, hmmm? Yeah, that's what they say ....

"What is important in life is life, and not the result of life." — German playwright, Johann von Goethe

Of course, not to be outdone on trying to conspicuously blunder and lose, the opposition is also working hard to snatch defeat out of the jaws of victory! It was bad enough that a FOX commentator compared the same-sex marriage issue to bestiality a la Pat Robertson and so many others. That's actually old-hat stuff now! Get the latest on the intra-species marriage issue from FOX (again)!

This was actually reporting on a story of a Swedish study that found that marriage was good for couples in that it kept them from dementia and Alzheimer's disease with absolutely not connotations on same-sex couplings at all. Yet their own Freudian mentality just keeps slipping out as on FOX & Friends morning show, we heard this from one of their triad of morning hosts, Brian Kilmeade:

BRIAN KILMEADE: I'm just amazed that they thought about doing this study in the – by interviewing people in the 1970s and the 1980s.

KILMEADE: The average is 50, and they see that they keep it together. I find this – I find this somewhat ....

KILMEADE: Different. Leave it to the Finns and Swedes to some up with something. They literally –

CARLSON: Are you sure they're not suffering from some of the causes of dementia right now?

BRIGGS: What are you getting at?

KILMEADE: See, the problem is, the Swedes have pure genes.

KILMEADE: Because they marry other Swedes because that's the rule. Finland – Finns marry other Finns, so they have a pure society. In America, we marry everybody.

That's right folks! Intra-species marriage is already here in America! As Kilmeade noted: "we keep marrying other species and other ethnics ... the problem is the Swedes have pure genes (ah! gotta watch them! the Master Race people!) ... Because they marry other Swedes because that's the rule. Finland – Finns marry other Finns, so they have a pure society. In America, we marry everybody." This is rife with alarmist xenophobia!

And marrying "other species"? Really? Are they buying that Georgia freak's Obama-as-Curious-George-the-Chimp T-shirt fetish as scientific fact? What a serious media outlet FOX has turned out to be, huh? It sure sorta hearkens back to the old miscenegation days from what I can see, all this concern about America's "intra-species" marriage and breeding! Wow.

"The most perfidious way of harming a cause consists of defending it with faulty arguments." — Friedrich Nietzsche

But if that's not wacky enough, it gets crazier! From no less than Washington DC, home of Marion Barry who supports everything EXCEPT for his staunch disapproval of same-sex marriage (and subsequent arrest this week for stalking – way to drive home the point of morals, Mr. Ex-Mayor!), we have testimony on the DC consideration of accepting same-sex marriage as law of the district from Rev. Leroy Swailes: http://www.youtube.com/watch?v=FFFYYjWjVuE

This one has to be seen to be believed. I can't make this stuff up, folks! Some of the reverend's philosophical proferrings are:

"If you discriminate against a homosexual that's a positive. Why? Because of children. You've got people they call pedophiles.... When you look in the eyes of a child and tell them "sex is between Adam and Adam, and Eve and Eve," that's a pedophile." Wow, it's that simple? And all this time I thought it was about something physical, like molestation or at least child nudity. What was I thinking!

"This book here talk [sic] about 'All Families Are Different' has to do with what? You have God's family, which is a natural family, and you have Antichrist's family." Yeah, all Godly families have to "be like us." That's exactly what the racist white families used to think during the days of Jim Crow, too, and they believed that the Bible told them where everyone else's family fell. It must be said that Rev. Swailes is African-American though his logic is eerily familiar, harkening back to those bad old days.

"Everybody should have human rights, but you have to be human! Human means you deal with the opposite sex...." Meaning that, what? All Trans people have tails? All gays are sick little monkeys? And I'm sure he meant it in the best way possible, no offense and all!

"Homosexuality destroys (life), it'll be the extinction of the human race.... Eighty-six civilized cultures, it was the death of their cultures why? Because they gave into ... strange flesh: the same sex, which is a form of bestiality. Why is that a form of bestiality? Because a beast has four legs and one gender! If you put two men together, you have four legs and two penises. That's one gender. That's a form of bestiality." Ah! Well that explains it! Four legs and one gender is animal! So if there's a three-legged dog, or a couple who are same-sex, but one partner only has one leg, then they'd be semi-bestial, right? Or if both partners are one-legged, then same-sex marriage would be okay because they'd be human! I recalled a show on Oprah once that showed a dog born with no front legs, and it literally taught itself to walk on it's hind legs, upright! That would make him human, not animal! So then a woman could then marry that dog and not be engaging in bestiality per Swailesian logic! But what about "eunuchs, which were so born from [their] mother's womb?" Vexing! Or for that matter, how about "eunuchs, which were made eunuchs of men?" Hmm ... clear as mud!

"I cannot look into the eyes of a child and tell them "you have a choice to be heterosexual or homosexual." That would make me a sadist! So what is a sadist? A sadist is the one who destroyed sex! ... and I don't practice Satanism." Not sure where the satanism thing came into play – a Freudian slip? And all this time I thought sadism, named after the Marquis De Sade, was all about inflicting physical or mental cruelty! Then again, I can see how some would get confused and think it cruel to tell kids they have choices in life. Better to eliminate all choices and just pre-destine everyone's life for them from inception! It eliminates all the guesswork! Just hand them an assignment sheet saying "here is your life – don't think, just live what we tell you." Hey look, I'm supposed to be a garbageman ...!

It's a wonderful world out there, kiddies. Yes indeed, batshit crazy.

Meanwhile, halfway across the globe, Iranians are protesting and taking to the streets, risking incarceration and even their lives for defying the Ahmadinejad Administration! And here in the U.S, that saga sure fell off of the radar screen fast! What's a country got to do to get a little media time over life-and-death issues like marriage? Iran's free people need a strong advocate here – someone like Mary Cheney: she who couldn't be bothered to bring up same-sex marriage or gay rights issues in her dad & Bush's campaign, and supported her daddy and the GOP (even with the antagonistic approach the Bush Admin took on her issues) because "there are terrorists who will stop at nothing to hurt this country ... I had to support the candidate who was going to do the best job to protect this country. And no offense to John Kerry, but it wasn't him."

So now that the people of Iran are trying to oust one of the heads of Bush's Axis of Evil, and folks in America are focusing on that less important stuff like same-sex marriage, where is Mary Cheney these days?

Vanessa that was a great post - sublime reasoning advocacy with uplifting snark - thank you. You are gifted ! Afer hearing Leroy i slipped into the wtf zone - dude you are actually saying we are not human - that all i wanted to do was kick him in the pills.
What's truly batshit crazy and terrifying is that teh stupid is so deep out there. Unhinged and this guy has a congregation ?
your posts are such good reads.