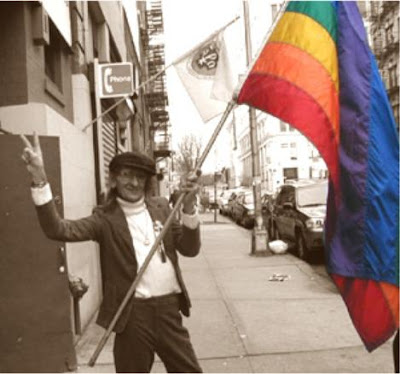 "We've been working our whole lives to make things equal. And we still got nothing. They don't care about trans people. ... But we will come back. We will fight back." — Sylvia Rivera from an interview on KPFT, June 9, 2001

As we come upon June 28, 2009 – the 40th Anniversary of the Stonewall Riots in New York City which catalyzed the public push for rights among GLBT people – we will see any number of events popping up to remember the occasion. While it may not have begun the actual behind-the-scenes work for rights, it arguably was the key moment to bring gay rights into the lexicon and consciousness of the rest of the world.

However, it became gay rights only shortly thereafter when those same behind-the-scenes, shadowy leaders in high places with memberships in the Mattachine or the Daughters of Bilitis commandeered the rough cut protests and tailored into a palatable visual for the inception of rights attainment.

This was a boon for the gay and lesbian community, but for those molotov-throwing "queens" and the "stone butch dykes" that began the physical confrontation and spontaneously organized the resistance, it was an opportunity quickly stripped from them. Any of them who would identify as the opposite gender, such as our movement's forebearers Sylvia Rivera, Marsha P. Johnson and the like, would find themselves squarely on the primrose path to hell. Many of them would never live to see the day when they are equal.

Fast forward forty years: there has been much progress on the GLBT front. However, there is disparate levels of progress between the G or L portion as opposed to the T. Marriage rights is on everyone lips these days and enjoys a hearty push and the most recent victories in a few states. And as soon as these victorious laws are enacted, couples begin lining up immediately for the nuptials.

At the same time, employment is tenuous for everyone – but especially so for the trans community. We're seeing our folks losing work, and worse, losing homes to foreclosure and going homeless at startling levels. Even once non discrimination laws are enacted, it could be years before society wraps it's brain around it enough to actually hire trans people – hell, even gay and lesbian groups don't have faith enough in trans people to hire them beyond the rare instance. 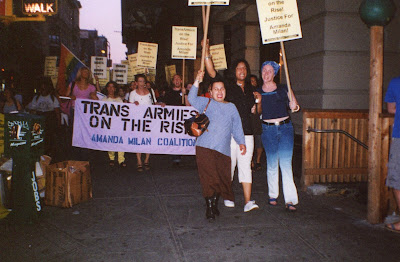 As we enter into Pride month and begin our marches and rallies, let's keep in mind the many of our pioneers who fought for equal rights for all, even after they were denied those same rights by actions of some of those very people they fought for. As the gay and lesbian community had their Bayard Rustin, so do we trans people have our Sylvia Rivera and Marsha P. Johnson.

"Goodbye to the summer.
Sold down the river.
Unhappy ever after.
Well did you ever? ...
Burns are red, bruises blue.
Out with the old. Cheated by the new.
Do you suffer from long-term memory loss?
I don't remember ...." — Amnesia, Chumbawamba

And if you think we're rounding the corner into getting everyone in our collective Queer community on the same page, I've attached a press blurb below in its entirety from the more progressive (at least much more so than the U.S!) environs of the U.K., where London's Pride is exhibiting the community stress fractures as well.

In a busy meeting on May 19th, members of TransLondon, London's largest support group for all trans-identified and genderqueer people, voted overwhelmingly for a boycott of the Pride London 2009 march and rally. As a result, for the first time since the group was formed, TransLondon will have no presence in the parade, nor at the rally.

This is part of an ongoing estrangement from Pride. Last year, a successful Pride march was marred at the rally in Trafalgar Square when a number of trans women were denied access to the women's toilets by Pride security stewards. One woman was subsequently sexually assaulted after being told to use the male toilets. Roz Kaveney, one of the women targeted in the 2008 "ToiletGate" incident, explained how she felt Pride London had only ever provided a grudging apology under threat of legal action, and that she felt they had never taken the discrimination against trans women in the 2008 rally seriously.

During the meeting on May 19th 2009, members heard how the democratic and transparent structure used in 2008 to co-ordinate participation of trans groups and the funds made available for transgender attendees, through the elected Trans@Pride committee, has been abolished by Pride London for 2009. Instead, Pride London have imposed their own unelected "representative" for the trans strand. Furthermore, requests for information about funding, how decisions were made and who participated in the decision-making process, have been rebuffed.

Last year, the elected Trans@Pride Committee consulted repeatedly with over a dozen groups and hundreds of individuals over before arranging travel bursaries for trans people to attend from around the country, hosting a breakfast for marchers on the day, commissioning artwork from a local queer artist as a rallying point for trans marchers, producing banners and bunting, arranging trans performers for all of the Pride stages including the main stage in Trafalgar Square and publicising the arrangements widely. In stark contrast, the meeting heard of how Pride London's appointed trans "representative" for 2009 has simply imposed Pride’s vision for trans participation in the march and rally.

The 2009 pride participation is, so we are told, to consist of a float at the very back of the parade which would pander to the most tired and inaccurate media stereotypes of trans people. Trans women would, in Pride's vision, be dressed in sequins, high heels and fairy wings and, apparently as an afterthought, a few trans men would be invited to pose in football strips. The Pride representative explained that the trans float would complement a float at the front of the march with members of the cast of the West End musical, "Priscilla, Queen of the Desert". In her vision, onlookers would be delighted to see "Priscilla at the front and Priscilla at the back". As a coup de grace, a visible cordon of security stewards would surround the trans float, ostensibly "for our own protection". 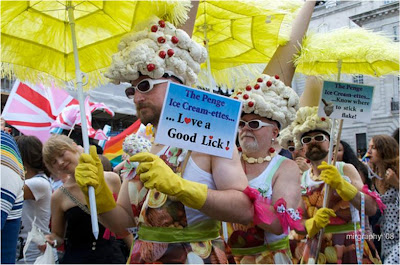 Rather than address the true diversity of the trans community, members of TransLondon felt that participating in such an event would serve only to bolster the kind of negative media stereotypes which portray trans people as "the cast of Grease", and that these undemocratic plans constitute an insult to London's diverse trans community. Sarah Brown, a member of TransLondon, an elected member of Trans@Pride 2008 and co-founder of the London Transfeminist Group said, "If I am to march at Pride, it would be as the lesbian woman I am, not dressed up as a corporate parody".

To determine TransLondon's official position on participation in Pride London 2009, three options were put to the vote:

Option one, to participate in the march under the terms we felt were being dictated by the Pride London board, received no votes.

Option two, to participate in the march independently of the "official" trans strand, as a form of direct action to show our dissatisfaction, received 31% of the votes cast.

Option three, to boycott the parade and rally received 65% of the votes cast.

There were some abstentions from members who wanted to see what their friends in other groups were doing before making a decision.

The democratic decision of the membership of TransLondon is therefore that the organisation will have no official presence or banner at Pride London, 2009. 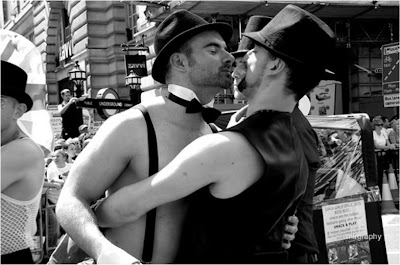 Christina Alley, co-organiser of TransLondon and elected member of Trans@Pride 2008 said, "Volunteers from a dozen trans groups worked incredibly hard for Pride last year. Members of TransLondon are extremely disappointed at being betrayed, marginalised and stereotyped in this way by Pride. Members have made their disappointment clear in a democratic vote to boycott this year’s march and rally."

TransLondon is keen to hear from other trans groups, allies and any groups from other parts of the LGBTQ community who also feel disenfranchised by Pride London this year. We would like to discuss alternative arrangements for a celebration of the diversity of the LGBTQ community, free from cynical corporate politics, where we can enjoy the true spirit of Pride.

We were extremely proud to march with TransLondon in the parade last year along with dozens of other groups and individuals of all ages and backgrounds. As a result of this announcement we are devastated this display of unity won’t be repeated this year. The only official offer of “support” from Pride this year has an offer to send a selection of our own members to be part of their separate and official “Trans Float” which we have already objected to on the same grounds as TransLondon. So we’ve had to seek funding for banner-making and costumes elsewhere as Pride London seem unwilling to hand any over.

We are currently reviewing our involvement in the parade pending the outcome of further consultation with our membership. Regardless of the outcome we remain committed to supporting safe, inclusive spaces for ALL trans young people even if many of our individual members decide to support a boycott.
Statement from Trans Youth Network http://www.transyouth.org

Queer Youth Network members are still committed to participating in the parade because pride is often the first time they have had the chance to actually be out in public as a group so we will support anyone who wishes to do that. Some of our volunteers who have previously taken a break from their duties in order to assist Pride have decided not to offer their services as stewards this year. We appreciate the level of hard work that has gone in to organising the youth at pride activities and events, however we also accept they won’t appeal to everyone so our main focus will be supporting inclusive, grass roots events that bring all of our community together regardless of their identity. We have decided not to take part in the rally in Trafalgar Square and we will not be having a stall as we can’t afford the fees and most of us will be heading to Hyde Park instead.

I fully support this boycott. I am sad to announce that Trans Ebony will not take part in Pride London this year. This would have been my first very pride in England having visited events all over the world. I was intending to enter a float for our group and was even told we could get some funding.

Pride London has the potential to offer a unique platform to showcase those normally ignored by the mainstream. As a struggling black transgendered artist I’m actually feeling incredibly angry towards those in charge of the festival. I was equally distressed to hear black and asian people have now been removed from the decision making process last week according to Pav Akhtar of UNISON and LGBT Muslim group IMAAN.

Deliberately closing so many doors on so many people does nothing but add to the multitude of prejudices trans ebony members live with every day of their lives. I accept we are a normally silent minority but that doesn’t change the fact London’s pride management have betrayed the very history it owes its existence to.