“Georgia, Georgia, no peace – no peace I find
Just this old, sweet song keeps Georgia on my mind” — Georgia On My Mind, Ray Charles

"But the Americans have no extra money. They have their own problems. They can provide financial assistance for two, three, four, or six months at most.” — Eduard Shevardnadze, former President of Georgia

It wasn’t as glorious as the Brandenburg gate. It also wasn’t even uttered in Georgia – whether in Europe or (as McCain would normally do a la his Obama Euro-trip shadowing, e.g. going to Berlin NH) whether in the U.S. in, say, Atlanta, Georgia. During a press statement made on the campaign trail in York PA, McCain said, “I speak for every American when I say … ‘Today we are all Georgians.’”

“My friends, we learned a great cost of the price of allowing aggression against free nations to go unchecked,” McCain added.

The last statement got me to wondering, in this world of nuanced politic-speak, what does Sen. McCain mean by free nations? How is that defined?

Does this mean nations that hold free elections? Before we get too far along, realize that Iraq used to hold elections as well, pre-American invasion. Did that imply that America was an aggressor on a free nation? Should that have gone “unchecked?” 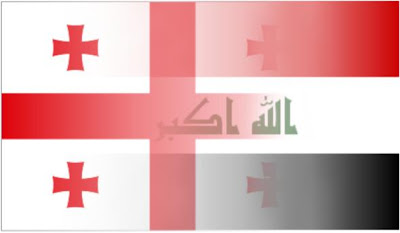 “I don't want to go down in history as a man who allowed blood to be shed. ... I couldn't stand the idea of bloodshed, casualties.” — Eduard Shevardnadze, former President of Georgia

Obviously, I don’t think that was a true, openly democratic society. Unsurprisingly, Saddam Hussein and the Ba’ath Party won every election and won them by landslide. That kind of gives signs that perhaps it wasn’t free will, but a coerced “free election.” Perhaps that aggression was warranted. Perhaps the same might be said if such aggression happened in other coerced democracies like Zimbabwe (home to Robert Mugabe, leader for life – elections be damned).

Sure, we’re all aware of official dictatorships and their immediate exclusion from the “free nation” club. But what about others that have “free elections” (quotation marks intended, not quoted), but whose “elections” are mere predisposed farce? Some of the U.S. allies have democracies that aren’t, really. Strategic places like Egypt or Uzbekistan, for instance. Would we be similarly blithe in ignoring aggression in those strategic, but pathetically contrived democratic sovereignties the way we expected others to do with Iraq when we went in?

If not, why not? We’ve established the precedent to aggression with these pseudo-democracies. Will we stand by if the people succeeded in unelecting Pervez Musharraf, are unsuccessful in ousting him, and encourage – say India – to come in and assist in their “humanitarian effort” (as we once referred to the Iraq incursion)? Or will we call that aggression?

Israel holds democratic elections, and any attack on them would be rightly viewed as aggression and not go unchecked. Gaza held open democratic elections as well, and in fact, so did Iran. In both cases, the people spoke – and surprised a lot of the conventional wisdom here in the U.S. No predictable dictatorships there.

What would we expect from the rest of the world if the U.S. (under Bush/Cheney or whomever succeeds them) decides without provocation beyond intelligence reports (which defy the National Intelligence Estimate date, I might add) that we should declare war against Iran? Will that not be viewed as “aggression against a free nation?” If not, what is the distinction a free nation and a “free nation”?

If it’s simply “friends of the United States” that are “free nations,” and any unfriendly country – regardless of electoral politics – are declared “not free nations,” then it is arbitrary policy.

And if the United States expects to be so arbitrary in our consideration, then Russia will expect the same. This is not a thoroughly considered precedent from someone hoping to be president of the United States, the storied arbiter of fairness and humanitarianism on the planet.

“You know, to address crowds and make promises does not require very much brains. … I believe politicians should always remain realistic.” — Eduard Shevardnadze, former President of Georgia
Posted by Vanessa E. Foster at 1:51 PM

Three passions,warcraft leveling simple but wow lvl overwhelmingly strong,wow power level have governed wow power level my life: the longing wrath of the lich king power leveling for love, the search for knowledge,World of warcraft Power Leveling and unbearable pity WOTLK Power Leveling for the suffering wlk power leveling of mankind. These passions,wlk power leveling like great winds,age of conan gold have blown me hither and thither,cheap aoc gold in a wayward course,aoc power leveling over a great ocean ffxi gil of anguish, reaching final fantasy xi gil to the very verge of despair. I have sought love, first, because it brings ecstasy - ecstasy so great that I would often have sacrificed FFXI Gil all the rest of life for final fantasy gil a few hours of this joy. I have sought it, wow gold because it relieves loneliness--that terrible loneliness in which one shivering consciousness dog clothes looks over the rim of the world into the cold unfathomable lifeless abyss.