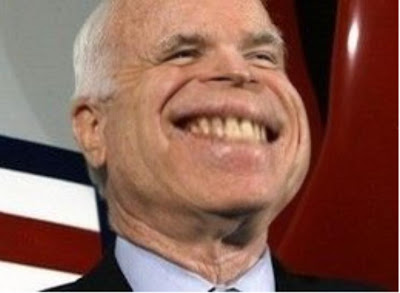 “Campaigns are tough, but I’m proud of the campaign we’ve run.” — Sen. John McCain on the Paris Hilton ad.

“In every life we have some trouble.
When you worry you make it double.
Don't worry, be happy.” — Don’t Worry - Be Happy, Bobby McFerrin

Yes it’s quite a parallel universe Republicans and Democrats live in.

For Republicans, we’re taking things like the economy too seriously (and whining about it!). We should take a page from Sen. John McCain and just be humorous about this election season. Have a laugh! It’s not like anyone is hurting or things are really bad – these are great times! Look at our “robust” and “fundamentally strong” economy and the rising GDP!

Our energy problems can be solved simply by injecting Paris Hilton into the mix! You know, she’s got a good plan! Maybe we don’t need someone as serious as Sen. Barack Obama after all … or semi-serious as John McCain for that matter! Hilton’s short entry into presidential politics has had great benefit! The price of a barrel of oil has dropped 20%! No offshore drilling, no new energy plan … just humor and someone who’s concerned about America’s future – and having fun! Yay Paris!

“All I can say is we’re proud of that commercial." — Sen. John McCain

"'Cause when you worry your face will frown.
And that will bring everybody down.
So don't worry, be happy.” — Don’t Worry - Be Happy, Bobby McFerrin

We should be thanking the McCain campaign for bring her into the presidential campaign lexicon! You realize we’ve got these GOPpers wrong – they’re really cut ups! Even the most hardcore conservative types are really amazing comic talents! Bush-baby tap dancing on the White House steps is nothing – you ought to see Mr. Practical Joker Cheney himself with the stink bombs and cattle prods! Even the arch-con religious figures are amazing stand-ups: “Patsy” Robertson with his million “homo” jokes, world-dominatin’ Dobson with his Armageddon quips and even old fat Pat Hagee (who’d have known?) with his arsenal of “a priest, a rabbi and a muslim” jokes! Don’t let their stone faces and dry wit fool you! Life’s all about mirth and f-u-n!

We have nothing to worry about at all – it’s time to smile, and have a laugh or two! Maybe even hang out and listen to McCain crack a few new jokes about Iran or gorilla rapes!

Yeah, and what’s up with Democrats and all of those in the lower-90 economic percentile anyway? Why so dour? Maybe we should just lighten up and take a page from McCain’s good friend, Phil Gramm and stop “whining” about this “mental recession!” Perhaps Republicans can show us the way to look at our situation.

After all, we are about ready to set a date – or a time horizon, as Bush likes to call dates – to withdraw our troops from Iraq! Oh Afghanistan isn’t doing as well. But here’s a way to forget about how we’ve fumbled the ball in Afghanistan: start a whole brand new war in Iran! That’s gotta make some folks (like Halliburton or Carlyle Group) happy, right? Or if that don’t cheer ya up, how about a real measure of war’s success?: we’re seeing big budget surpluses in Iraq! Over $80 billion estimated budget surplus for the government in Baghdad! That’s gotta bring a smile to everyone’s face – especially Iraqi ones!

“You know, a few days ago, Sen. Obama said he challenged me to a duel. I’m for the light sabers as weapons of choice.” — Sen. John McCain

“Ain't got no place to lay your head.
Somebody came and took your bed.
Don't worry, be happy.” — Don’t Worry - Be Happy, Bobby McFerrin

I know, our budget’s really tanking here in the U.S. right now. But then again, we’ve got China ready, willing and able to meet all our budgetary needs to keep running the government. So what the hey? All the governmental receptions and high-dollar dinners go on like always! Best of all, we’re gonna push through a bill to extend the debt ceiling up to $10 trillion, so that’s gonna keep the happy train rolling too!

Another thing, unemployment’s only as high as it was right after 9/11, no biggie. The companies hemorrhaging red ink are shedding more jobs and the future is more tenuous by the week. Ol’ Raisin’ McCain just helped push through a merger for DHL and Airborne Express that’ll help close down their U.S. operation in Ohio and shed over 8,000 jobs! And yet wages are staying down due to the desperation in the job market! Sweet! That’s gotta be great for the stock prices -- pop the corks!

Did you see? Gasoline is now only $3.80 gallon! That’s down a whopping 6% -- break out the kegs and kick out the jams! Yeah, it’s about 380% of what it was when Bush-baby was elected president. But think of the nice record profits for the oil industry … the most ever anywhere on the planet! We’re number one, baby!!! USA! USA!

(It also means some very generous political contributions from the oil tycoons for the “right candidate, nudge-wink” so keep that in mind Mac Daddy! You can even buy Cindy Mac a cheesy facelift with that bank!)

The foreclosures are ramping up for the second wave -- the non-subprime loans going into default. Wha-hey! It’s not like we haven’t seen this before! And even if it is more widespread that it was in the late 80’s Savings & Loan meltdown -- think of all the opportunities for investors to snap up dirt-cheap properties from those sad sacks who lost their homes. John and Cindy McCain own about ten homes … maybe they can pick up a few more? They don’t call it “Capital” gains for nothing!

Now sure, the prices of everything are going up, up, up. Look at the bright side though: we need to break this consumerism addiction anyway! We can’t afford this stuff! Our debt levels are beyond maxed out! Forget your buying, come on, get happy! We’re gonna chase all your credit away! You know what they say now: “Poor” is the new “Black”! Get in style!

And I bet you didn’t know that your conservative pals in politics and corporate America are really conservationists!?! They’re helping you buy much less due to rising prices and disappearing jobs, meaning less driving (and gas) and much less packaging and trash for those overflowing landfills! And they’re making you feel good about not buying things! What a bonus! You might even get to see McCain show up at your local supermarket, checking out the price of cheese (though probably not government, cheese -- sorry.)

Of course you can just stay home and watch those hilarious John McCain campaign commercials – and they’re on regular TV! That’s right, free! They’ll have Barack Obama on a dollar bill, Obama as Moses, Obama as Paris Hilton and Britney Spears, Obama as Osama … stuff that’ll make you laugh so hard you’ll pee your pants! Maybe the old Raisin’ can do more drop-ins on Leno or Letterman or Fox’s Mad TV, and let loose some more of his Iranian jokes (like the old Beach Boys’ tune: bomb, bomb, bomb, bomb, bomb Iran)! Now tell me, when have you seen a campaign like this? Never! This is truly a candidate of change! In times like this, he keeps you cracking up and entertained.

“We’ll continue to have humor in our campaigns. ” — Sen. John McCain

“Ain't got no cash, ain't got no style.
Ain't got not girl to make you smile.
But don't worry be happy.” — Don’t Worry - Be Happy, Bobby McFerrin

He’s even got Big & Rich (ironically appropriate and true – I can’t make this stuff up!) doing his newest campaign song: Raisin’ McCain. All of this dovetails nicely with his campaign slogan too: Country (and Western) First! Then afterwards they’ll do a live TV special so he can do a Rap-and-Rock duet with Kid Rock, live from the Buffalo Chip biker rally in Sturgis, SD! Wow, is that Cindy (“I don’t slather make-up on like a trollop”) McC^nt onstage doing air guitar to an Iron Maiden song? 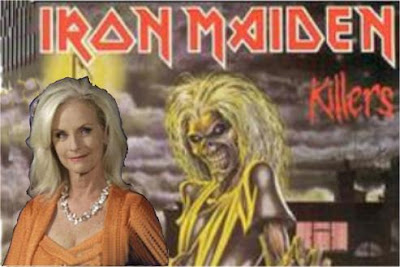 So stay home, stay safe, and just watch your TV set like you’re programmed (and stay off that computer because that costs money and lotsa people don’t even know how to use it anyway.) Happy days are here again. There’s no need to be so serious or whiny over things that are happening right now. That stuff’s for losers!

Because, friend, here’s some straight talk I want to express right to you: Make sure you are registered to vote right now. Then on the last week of October, go out and early vote. If you don’t early vote then, make sure you vote on November 4th.

That’s some straight talk you can seriously use.

“What we are talking about here is substance, and not style.” — Sen. John McCain

"The landlord say your rent is late.
He may have to litigate.
Don't worry, be happy.
Look at me, I am happy.” — Don’t Worry - Be Happy, Bobby McFerrin
Posted by Vanessa E. Foster at 8:29 PM