A Tale Of Two Communities: The HRC SF Gala

The Haves. The Have-Nots. Sexual Orientation. Gender Identity. Gay and Lesbian. Transgender. Distinct, disparate, disengaged and mutually distrustful. It was likely not intended to be this way, shouldn’t be this way, but such is how we find it in this period of social and economic malaise.

San Francisco, the capital of Gay America, is set to host a banquet for the Human Rights Campaign (HRC) who (despite the generic, non-descriptive sounding name) is the largest and most widely known and press-worthy gay and lesbian organization in the nation. While they advertise themselves as “transgender” as well, it’s not a sentiment shared by the overwhelming majority of the trans community. It’s gotten so bad that even former transgender allies of theirs have taken to joining the ranks of the disenchanted, calling them “liars” and “immoral.”

However, HRC is doing their best to spin it, and put on the good face. In an attempt to blunt the criticism, they’ll bring a trans man – Diego Sanchez, fresh from testifying before Congress last month – to speak to the gather. For his efforts, HRC will use him as their shield to take the brunt of the vitriolic barrage. Knowing Diego as I do, I know his intentions are true. That said, he will nevertheless be savaged by those of his own who don’t know better and used by JoeSo and company to keep themselves safe and sound as much as possible.

So tonight, it’ll be another splashy, high-profile (and high-dollar) soiree replete with haute cuisine and couture and a few star-studded special guests to speak (beyond the now begrudgingly obligatory trans speaker). They’ll dine, rub elbows and party fabulously, as is customary. Nary a thought will be given of the protesters who, this time, will be a bonafide, clamoring throng. 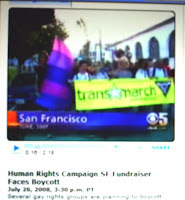 “I have had unformed ideas of striving afresh, beginning anew, shaking off sloth and sensuality, and fighting out the abandoned fight. A dream, all a dream, that ends in nothing, and leaves the sleeper where he lay down, but I wish you to know that you inspired it." — Charles Dickens, A Tale Of Two Cities

Meanwhile, the transgender community has lost patience and any faith in the national political leaders of the gay and lesbian personified by HRC. The protesters will then repair, along with more egalitarian local gay community leaders such as State Rep. Mark Leno, and City Council members Tom Ammiano and Bevan Dufty to their own private dinner away from, and absent of the glitz and glamour.

It is fitting symbolism. For many years, whether outwardly spoken or guardedly unspoken, HRC and their ilk have established a separatism and classism between the ranks of the connected and disenfranchised elements within the gay and lesbian community. There was no coordinated hue and cry to the public as by doing so against the connected gay and lesbian leadership would by extension work against themselves.

As transgenders finally came to visibility, these power brokers broadly did likewise with the whole of the trans community. About this time, more of those previously disenfranchised factions began remaking themselves during “nelly-and-butchophobia,” and worked in some cases to lift themselves out of the morass into newly becoming part of the connected. Meanwhile he “khaki crowd” had a new, more alien these in these upstart trans people.

One thing HRC did not count on the trans community’s refusal to be squelched and muzzled. We were never included in the early years, and had nothing – thus, nothing to lose! The socioeconomic disparities are extreme between the two overall communities, and the violence, systemic harassment and lack of redress are notably more severe and hard to ignore once the spotlight fixes on it.

As time went on, HRC took a notion of finding the few more fortunate individuals in the trans community and bringing them into the inner circle, hoping to placate the trans community as a whole. As an added bonus, they would take for themselves the de facto ownership of PR on trans issues in the media, and work to beef up their fundraising now with their adopted cause of “trans advocacy” – with neither trans guidance nor approval, mind you.

HRC, in essence, stole the voice and left behind a still impoverished and even more infrastructure-deprived trans community with even less ability to get the message, the true impact and the sense of urgency out to the world. Not only did conditions not improve, the violence and lack of opportunity (in this Bush Economic Recovery) remained and even increased. As a result, and after the most egregious of manipulations last year with the ENDA support reversal immediately on the heels of their “promise” to those at Southern Comfort, even the enlightened among the gay and lesbian community were seeing the ruse. While HRC still plies its message to the dark corners that haven’t seen the light, as more of the community – trans as well as gay and lesbian – see the light, their finding fewer sanctuaries for themselves.

For now, after tonight’s banquet HRC will continue as is and will still work to rope in more Barnum-babies from the trans community to replace their previous (now-disillusioned) trans leaders. In contrast, their actions will continue driving away more of their own gay and lesbian members who are sick (and even a bit ashamed) of their own community leaders’ hypocrisy and casual heartlessness.

As for the trans community’s rank and file? Jobs and opportunities will continue being scarce-to-non-existent. The violence and anguish and fear that go along with it will remain in place, along with the sense of near-helplessness and mounting frustration. There will be no vacations, no high-dollar dinners, no political appointees or electees, no circuit parties … and really not much fear about marriage rights as the primary concern is merely surviving. Yes, even in the 21st century, that’s a tenuous proposition still – especially for transgenders. To wit: Angie Zapata in Greeley, CO just a week ago.

We may not have allowance to be heard, but we still have the voice with which to scream. And so it goes …. 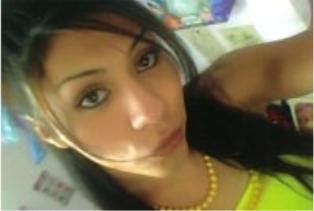 Women need to be empowered more in general. They need to use their looks for good rather than use them for personal selfish persuits. When you get a moment check out:

As usual, your words are prescient. You mention the vindictiveness of HRC, and HRC goes and sics their goon squad on Catherine Cusic. This, after the way Phyllis Frye was handled in Houston, the "four horsemen" stationed outside the protest in Houston, the harassment of Monica Helms at 2 different events in Atlanta.......

HRC has lost their vaunted touch with public relations. They have lost their touch with reality as well. As have their followers.

This is a snowball rolling downhill, one that will probably become an avalanche.