South Carolina Is So Gay?: Picking At Scabs Just To See Blood Flow

For a while I’ve been privately fretting over the political implications of the same-sex marriage victory in California and whether we could see a replay of 2004 in the election process. One item that escaped most of the media that year was something we discovered here in Houston while I was still on the board of the Montrose Counseling Center which primarily served Houston’s gayborhood.

During that election 2004 cycle (and immediately after the initial court victory in Massachusetts giving gay and lesbian residents the right to marry) there was a study to gauge hate violence in a selection of cities around the country which also included Houston. As typical, after the high profile news regarding the queer community (especially anything in a positive manner) drew an unsurprising backlash from the queer-haters. There was a noted uptick in reports of anti-queer violence.

For the most part, I’m hopeful there are other more pressing issues on voters’ and the general public’s plates besides “gay rights” issues (a call to arms for the religiopolitical set in typical years).

However, a couple of headlines have grabbed my eye recently. The first dealt with Sasha Baron Cohen, he of Borat, his erstwhile Kazakhstanian alter-ego doing his reality TV version of documentary-as-movie comedy. The latest effort from Mr. Cohen deals with his Ashton Kutcher-styled “punking” of redneck America as “Bruno”: as best I can tell, a gay male wrestler out to take on, fit in with and simultaneously lampoon the LCD Bubbas in the hinterlands between the two liberal, socially-enlightened coasts. 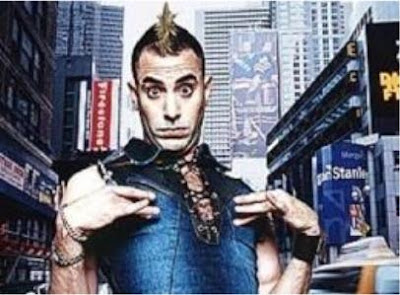 This movie will likely make a lot of its viewers laugh. This movie will likely try to humanize disparate stereotypes on the opposite poles of American society, and may even get a few redneck types to admit to not really having much problem with us “queers.” The downside is that some of those who’ve been played simply for the movie-going audience’s entertainment aren’t going to take this slight with a grain of salt.

As described in the new release on the “cage wrestling match” in Fort Smith, Arkansas against another actor named Straight Dave [http://www.huffingtonpost.com/2008/07/08/arkansas-cage-fight-turns_n_111425.html], their scripted “spontaneous” man-love fling in the wrestling ring drew nothing positive (other than good movie fodder). All it tended to do was piss off the attendees who threw beer and just about anything else they could grab, and issued verbal threats to the actors who slipped out a tunnel after the impromptu reality-movie scene.

For Cohen and the film’s producers it was great theater with lots of raw emotion. They go back to the safety of their homes after, their production becomes a critical success with a bit of a box-office take to boot and all is good in their lives.

So how about the folks – especially the GLBT residents – who live and remain in Fort Smith?

Coincidentally, I happened to have in old South Fort Smith in 1966-67, less than a mile from the airport and about a quarter-mile from the coffin factory and other manufacturing interests in our little corner of the world. Things may have changed in the past 40 years, but I do recall that it was certainly not an enlightened nor a forgiving environment back then.

There will likely be at least a few pissed off Arkies who aren’t at all happy about being punked by Messrs. Cohen & Co. I worry about the people, especially GLBT citizens, who end up in harm’s way by these folks who feel need to vindicate their pride, manhood or lack of understanding and frustration thereof.

Just this afternoon I noticed another headline reporting of the controversy over South Carolina’s tourism marketing efforts during London’s Gay Pride week [http://www.msnbc.msn.com/id/25677373/from/ET/]. In one of the major publications in London’s GLBT community, the Palmetto State took out an ad with the slogan:
“South Carolina is so gay.” 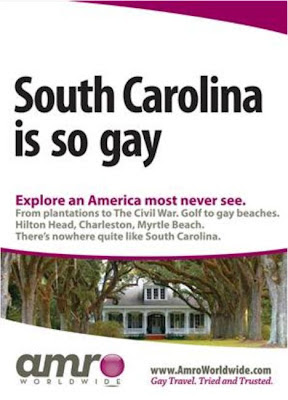 Even though it’s still the epithet du jour of the straight, adolescent set, it was an attempt to seize the phrase and neuter it with gay-positive intent and cutting-edge marketing. Whether or not it was taken that way in America’s GLB community remains to be seen.

However, the straight faction of South Carolina’s State Department of Parks, Recreation and Tourism had other thoughts … basically “what the hell are we doing being advertised as a vacation spot for gays and lesbians?!?” The decision was blamed on a lower level employee who authorized the $5000 expenditure to advertise South Carolina to the gay and lesbian event in London. The scapegoat employee, no doubt, saw this as an easy return on the money as gay and lesbian tourism is a lucrative $64 billion a year business catering primarily to double-income, no-kids couples who love to spend money and don’t tear the place up in anywhere near a rowdy fashion as would, say, spring breakers.

Well, apparently the employee in the tourism department was a victim of hopeful naïveté.

“South Carolinians will be irate when they learn their hard earned tax dollars are being spent to advertise our state as ‘so gay,’” according to GOP State Sen. David Thomas of Greenville, home to the controversially conservative Bob Jones University.

“From where we sit, and for all our many customers, being described as ‘so gay’ is not a negative thing at all. We think it is just great to be so gay,” said Andrew Roberts, chief executive of Amro Worldwide, the travel agency that commissioned the ads. And where Amro sits is in the middle of jolly old England – not the middle of arch-conservative America. It doesn’t take much of a stretch to venture they probably don’t know the breathtaking levels of bigotry and intolerance in George Bush’s America.

State tourism officials insisted that they had known nothing about the campaign. But when the promotion was first announced last month, the tourism board said in a statement that “it sends a powerful positive message.”

“For our gay visitors, it is actually quite wonderful for them to discover just how much South Carolina has to offer — from stunning plantation homes to miles of wide sandy beaches,” the statement said. Indeed the Amro website displays many of the states tourism gems: Charleston, Myrtle Beach, Hilton Head ….

While I can see how Amro wouldn’t know the environs, the tourism folks in SC should’ve known their own state – and its sentiments. It’s almost like advertising to clueless folk in a Klan publication to “discover the wonder and history of New York City’s Harlem.” While folks may well visit without incident, alerting the subject destinations of their future controversial visitors can’t be a good idea.

“I wish the folks at the tourism board had done a little more of their homework,” said Warren Redman-Gress executive director of the South Carolina Alliance for Full Acceptance, a gay/lesbian advocacy group. “I get calls regularly, people want to know before I come and spend my hard-earned money, my souvenir dollars in South Carolina, is it a place where it is OK for me to be gay?

“The answer is yes and no,” he said. “You live on the edge with the simple fact that you can come to South Carolina, spend your money getting here, and someone can come in and say, ‘I’m sorry; you can’t stay here because you’re gay.’”

It’s a sentiment I can understand. Being raised in South Texas and living in the comparatively progressive environs of Houston, I fully appreciate realistic hopefulness. Between the Northeastern states, the southern reaches of Florida and the Pacific Coast is what we refer to as the howling hinterlands. Unlike our more openly progressive corners of the country, it’s still not okay to be openly gay, trans, queer or whatever. It still carries its repercussions.

Many years ago, about a year or so after making my first pilgrimage to Provincetown, MA, I vividly recall a crude cartoon one of the truck drivers at work showed me. It depicted a caricaturish trans or gay drag queen replete with purse and a tied at the midriff blouse and skirt and muscular legs with hair talking to a flint-eyed cowboy sitting in a wooden chair with a boot up on a barrel and leaned back against a wall. The dialogue was as follows:

Flaming Queen: “Where do all the gay people hang around at here?”
Sneering Cowboy: “Offa trees ….” (as he dangles his lasso next to him)

The guy who passed around the cartoon was a friend of mine, and actually was a decent happy-go-lucky fellow. He was the type that, if I’d have informed him of my being trans, he wouldn’t have let it affect his view of me much. But it points out the blithe ease and even humor of such attitudes that, by extension, end up being expressed in physical hatred. Such was Corpus Christi in the mid 80’s, where our main export at the time was top-10 ranked professional welterweight boxers. This was not a place to even attempt to transition – not if you wanted to survive.

This certainly influenced my worldview in numerous ways, especially on my own approach to the greater Queer community. Our view of life in the howling hinterlands tends to be geared more towards self-preservation and pragmatism than the heady, in-your-face idealism in DC or Boston or San Francisco or New York.

While the Sasha Baron Cohens and the Amro Worldwides or our national leaders in pushing the envelope on gay rights in the progressive enclaves can be bold and provocative, they also get to go home to the relative safety of their retreats. Meanwhile the GLBT folks in those hardcore conservative bastions remain in a festering, bubbling stew of mean spirit – a stew that will dish out its vindication if the opportunity presents.

There’s a perennial disconnect between the perceptions of our bold leaders in the progressive society and those hopeful survivors out here in a more vulnerable, less-tolerant world. Hopefully someday they’ll make the connection and recognize the risks they indirectly convey upon those of us they’ve never seen nor heard.

Until then, it’s time to gird ourselves out here in the hinterlands.
Posted by Vanessa E. Foster at 4:44 AM

This hot button issue. which many credit as leading the Republicans to victory in 2004 elections, has lost some steam since it was used to whip Christian Conservatives into a holy frenzy of frothy rabid goodness that led 11 states to pass anti-gay legislation.
-------------------
williamgeorge
south carolina drug rehab