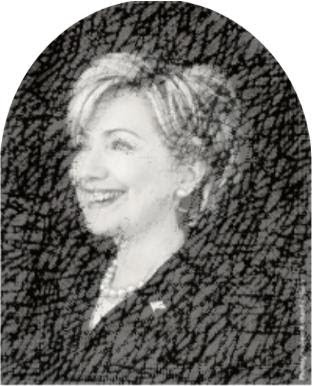 Another thing that happened while we were in the midst of our Texas State Dem Convention: Hillary Clinton suspended her presidential campaign. Finally.

Yes, that last word was tacky. But clearly she stayed on a bit longer than she should’ve, ignoring the fact Barack Obama had not only reached the 2025 delegate threshold, but even the subsequently raised bar of 2118 (an insurmountable majority regardless of anything else). It’s tantamount to keeping shrimp for a week in a cooler … in the summer, no less. There’s no way you can miss the smell of something that’s expired some time ago. However, you must agree that Hillary Clinton could never be considered a quitter. She’s no shrinking violet!

Unfortunately, during the latter part of her campaign, the Clintons’ desperation started shining through in increasingly bold fashion. Bill Clinton’s reference in South Carolina was only the beginning of the gauntlet throw-down. The campaign wonks knew where Hillary could find a definite wedge, with the Afro-phobic element in older and more rural or blue-collar Americans.

And Hillary and her campaign deftly played the nuanced divisiveness: comments about how “hard working Americans, hard working white Americans” weren’t likely to support Obama, and even ending with the harrowing comment about how things change by referencing how Robert F. Kennedy’s campaign in ’68 went into June. For those not alive then, it’s a reference to when Kennedy’s campaign ended because he was assassinated! How they expected comments like this to be taken as anything but polarizing to black and white America completely escapes me.

However, faith in what’s true ruled. Those who saw through the thin veil rejected the

This campaign ended up becoming a repudiation of all things HRC.

Yes, these are Hillary Rodham Clinton’s initials. But for those of you in GLBT America, the HRC means the Human Rights Campaign (billed as the largest gay, lesbian, bisexual and transgender organization in America – though the trans people have never been equals there).

These two share more than initials: there’s been a closeness between Clinton and HRC as far back as the latter days of her husband’s presidency. As my friend Ethan St. Pierre, President of the National Transgender Advocacy Coalition (NTAC), pointed out some time back, every one of HRC’s board of directors was supporting Hillary. Even Donna Rose (the only trans board member HRC ever had) once supported Clinton early on, before switching to Obama.

However, for those in the transgender community with deep or long-time knowledge of HRC (the organization who bills themselves presumptuously as the largest gay, lesbian, bisexual and transgender group in the nation – although the transgender community by-and-large want nothing to do with them), we weren’t at all cozy with Sen. Clinton. In 2001, after HRC had officially declared themselves to be “trans-inclusive” in their mission statement and presumed supreme knowledge on our issues as they would with gay issues, Hillary was queried by the Gay City News in New York City about issues arising from lack of inclusion of transgenders in the Employment Non Discrimination Act (ENDA). She responded she was unaware of any problems with that as her friends in the gay and lesbian community had never noted such a problem.

Yeah … why bother asking the transgender people about their own sentiments on important issues to us. It’s not like we’d know our own issues, right? Go to the experts: the gay and lesbian community. It was tantamount to responding “I’m unaware of any problems regarding discrimination against African Americans as no one from the Anti-Defamation League (the largest Jewish advocacy group) never mentioned any problems with it.” And of course, what does it say about HRC’s own “professional” advocacy expertise on transgenders?

In 2006, Hillary was later asked about transgender inclusion in ENDA. She was lukewarm. She supported it in theory, but thought there needed to be more education (the Human Rights Campaign mantra on transgender rights). She even went so far as to state doubts about us being in employed in positions of responsibility.

Earlier this year, there was a campaign appeal the Clinton camp sent around that noted her support of GLB and even the transgender community, even mentioning she was so supportive as to be a proud co-sponsor of the Senate ENDA bill! Yes … the Senate ENDA bill that Sen. Ted Kennedy insisted matching the House version of ENDA by Rep. Barney Frank … which was intently not inclusive of “gender identity” – i.e. transgender. Nice shot there, Mark Penn & Associates!

Finally, just before the Texas Primary, our own Houston Gay & Lesbian Political Caucus (HGLPC) screened both presidential candidates. Per Rose Wall at the Texas Dem Convention, Obama was genuinely curious, asked many good questions and appeared attentive and interested in the transgender issues. Wall also noted that Hillary’s answers appeared to be read from a script that “could’ve been straight from the HGLPC material on transgender issues.” When the vote came down, it was a 3 – 2 vote: both gay / lesbian screeners voted for Hillary, all three transgender screeners voted for Obama.

One thing I want to make clear to everyone: the Human Rights Campaign’s closeness to Hillary Rodham Clinton killed her chances in the transgender community and with everyone who cared about us. If HRC can trash NTAC and it’s reputation, and claim that affiliation or cooperation with us will kill credibility, let it be known that HRC’s reputation has similarly claimed it’s first credibility victim in the most visible fashion possible: the race for President of the United States. HRC’s affiliation with Clinton broke the back of what was once a very cohesive GLBT bloc vote.

In this, arguably the closest campaign in primary history, Harold Ickes, Mark Penn, and the master campaigner himself, Bill Clinton all overlooked a small (2%) but politically growing segment of society: transgenders. They also lost the youth vote – college kids. And guess who have been the biggest supporters of fully inclusive legislation? These very same college students that we’ve been speaking to in classes on transgender education around the country this past decade plus. These college-aged voters are quite a bit larger than the trans community, and are very much seeking change from the old, heavy-handed, manipulative ways (e.g. HRC). Yes, Ickes didn’t parse the numbers fully, and that 2% trans and all the college youth who know of us (at whatever undetermined percentage) that killed them.

So much for banking on the gay and lesbian vote via HRC. It reminds me of that old saw: sleep with dogs, wake up with fleas.