No Ms. DeGeneres, We Are Not "All The Same People" 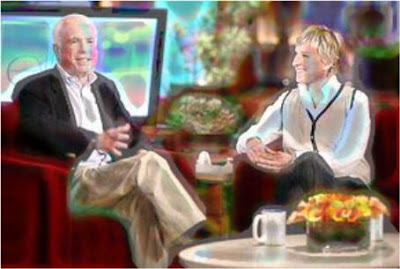 “There is nothing so unequal as the equal treatment of unequal people.” — Thomas Jefferson

Recently California’s Supreme Court ruled in favor of allowing same-sex marriage in a landmark decision that makes it only the second state in the union to allow full marriage rights for anyone, regardless of whether they share the same gender. For many around the country in support of marriage rights for gays and lesbians, it was time to celebrate.

Of course on the flip-side, this was yet another log on the bonfire burning in religiopolitical America. They obviously will use this as a battle cry to attempt to stir some life into what’s become a dead season for Republicans in general, and specifically for Bush/Cheney neo-conservatives. While it may be “too little – too late” we would also be wise to remember history. Many thought Bush and the GOP had no chance at all in 2004. Even though John Kerry distanced himself from the sudden appearance of the issue, it didn’t matter. Fully half of Bush’s vote – 27% of those in exit polls – cited “values” as their reason for voting.

“Values” = religiopolitical church-going conservatives = queer-phobic = virulent anti-gay marriage. In an election decided by a razor-thin margin, even the tiniest nudge can produce the tipping point for the whole game.

That said, I must say I’m happy for the gay and lesbian community over a victory that’s been a dream of theirs for so many years. It’s a relatively new fight, but they’ve pulled in a major victory in a very large state. With the announcement, many in the state’s gay and lesbian community – including Ellen DeGeneres – announced their wedding plans soon after the court ruling.

Speaking of Ellen DeGeneres, she had GOP presidential candidate, Sen. John McCain, on her show Thursday. For some reason, it struck me as an ill-fit on both parties’ parts. How Sen. McCain hoped to somehow hold onto his base with an appearance on DeGeneres defies logic. Maybe age is creeping in on him (or desperation).

As for Ellen, this smacked as too much pandering to Log Cabin Republicans who are far from being mainstream gay and lesbian community members. They tend to be much more surreptitiously gay, kinda like DeGeneres was for many years (as if that needed a reminder). Why pander to them in a seemingly Dem watershed year? Additionally, why feed the religiopolitical phobias on marriage by giving them more ammunition to blast us with?

“If I don’t want to keep getting shot, why give ‘em ammunition?” — Go On, The Waitresses

“I think that people should be able to enter into legal agreements, and I think that is something that we should encourage.” So said Sen. McCain on the May 22, 2008 version of Ellen. “I just believe in the unique status of marriage between man and woman.”

While McCain shot one of those mad-eyed looks, noting they had a disagreement on the issue, DeGeneres pressed forward with the issue with a classic line: “There’s this old way of thinking that we are not all the same. We are all the same people – you’re no different than I am, our love is the same.”

My immediate reaction was, “What?!?”

I’m not denying DeGeneres or the gay and lesbian community’s desires to be equal, nor the opportunity to have rights that all other Americans have. Nevertheless, even though Ellen’s comments drew whoops, hollers and applause from her supportive audience, it’s a totally unrealistic statement! The obvious answer is “no, we’re not all the same people, no different, etc.”

In real time, the “old way of thinking” is still very much in effect. I’ll agree with her concept: everything ‘should’ be fair and equitable. But “should” doesn’t equal “is,” and we live in America, home of the bait-and-switch. Before you get uptight and want to take to the streets against the usual straight, white, privileged American targets, look around your own neighborhood first. Some of those same “old ways of thinking” about others flourish in environs where they themselves felt the sting of those prejudiced ‘old ways thinking.’

Something I’d love to see is the expression on Ms. DeGeneres’ face when she asks her heroes at the Human Rights Campaign (HRC) or the most venerable gay political figure in the country, Rep. Barney Frank, whether they believe we are all the same people, no different than she or HRC or Barney are. Let's hear them pontificate on transgenders and incrementalism, or why trans people, lo these many years later, are still not good enough to be equally hired in even GLBT workplaces. In fact, I’d love to see her respond to this once she discovers the truth (presuming she doesn’t know the truth already).

Yes, it’s a travesty that straight, white, conservative America desires rights, opportunities and privileges that only belong to them while others should only receive varying lesser degrees of rights. But if someone fighting discrimination applies the same approach in carving a more privileged set of rights, opportunities and privileges for themself while being silently complicit in others’ being deigned an inferior set of these same qualities in their lives, you immediately undermine the foundation supporting your own claims to equivalent treatment. From disparaged to hypocrite in one easy step.

We all, no matter who we are, wish for equivalent treatment in all things. California’s GLBT, including Ms. DeGeneres, are very fortunate indeed. But Ellen shouldn’t be expecting “equal” on a national basis any time soon. It wouldn’t surprise me at all when these very same conservatives like McCain, those who won’t support or recognize Ellen’s upcoming marriage, turn these requests for being “equal” down cold.

It wouldn’t surprise me if they also use the same argument against their equality that gay and lesbian leaders like HRC or Barney Frank et. al, use against transgenders seeking the same treatment.

"Going for marriage is like shooting for the moon. It's our hardest issue, but success would bring the greatest rewards." — Elizabeth Birch, Exec. Dir. Of Human Rights Campaign in 1998

“There are two schools of thought when it comes to passing legislation, work incrementally to get the kinds of protections or laws that you want passed - or push for the full law you want to see enacted. In my experience, incrementalism is sometimes expedient but it almost always creates a less than perfect result. Even in Massachusetts, where there is a non-discrimination law - it only protects sexual orientation. At the time it was passed, advocates said we would go back later and deal with gender identity and expression - but it was never done.” — Cheryl Jacques, former Exec. Dir. Of Human Rights Campaign in 2007 after leaving HRC.
Posted by Vanessa E. Foster at 11:30 PM

Trying to get my goat dear?

Actually, Virgotex had something along the same lines, but on a different topic. I'm freakin' fired up.

And no, none of us are the same. Our lives and loves are unique. That's the nature of Life.

You want to fight these fools? Count me in Darlin'. I have a network from Hell.