Big Plans For Big Easy And The Little Equal

This will be a short blog post as I’m awaiting my riding buddy coming in from Dallas. Yes, a couple of tranny road warriors will be hitting I-10 shortly, heading east into the Big Easy to help protest the Human Rights Campaign (HRC) Banquet. Who knows? Maybe we can draw out the riot squad replete with barricades and horseback crowd-control officers just like Houston?

At first I pondered whether to make a trip over to New Orleans, whose community has been decimated since Katrina and still remains mostly scattered to the four winds. Then my good friend and longtime trans activist, Courtney Sharp, sent the below advertisement for HRC’s New Orleans Entertainment Extravaganza!: 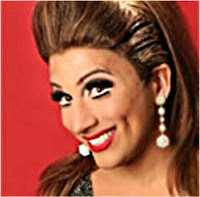 Note how their version of entertainment is having someone in the form of Bianca Del Rio caricaturize women and more particularly the image of gender transgression. Example: transgender! Yes, we trans people (who everyone in Congress and gay-elite-land knows are beyond help in the form of justice or rights) are the perfect fodder for humor for their little tete-a-tete. Yet another reminder how objectified we trans people really are in elite G&L America, and hooray for HRC for reminding us of that again!

You gotta know we’re making gains when they’re back to remembering us in caricatured form again.

Since the HRC has already written off the lion’s share of transgender activists as people to avoid and circumvent, and added a nice little character assassination to top it off, why not make it a self-fulfilling prophecy for them? Certainly when you have nothing to have ever gained, there’s nothing to lose!

More pointedly, HRC in its contemporary version really has no clue what protesters and “loose cannons” are all about. They complain about this now! These folks really have no recollection or awareness of the old days, the Act-Up days, the Stonewall days. In short order after the next congressional session (and maybe sooner), they will. It’s time to give them what they want to portray us as and what they expect – protests and acrimony, venom and voices raised to a pique.

Maybe it’s time to “give the people what they want” … so to speak.

So off to protest in the Big Easy with Kelli Busey and Courtney and the good folks hosting in New Orleans! Then time to hit the French Quarter too! (Hey, you’ve gotta have some diversion to get your mind off of the depression borne from the GLBT politic!)
Posted by Vanessa E. Foster at 6:20 PM

Hope you hit that lying sac 'a' manure Solmonese with something he can't handle - the truth.