Postcards From Houston: Videos Of The HRC Banquet Protest 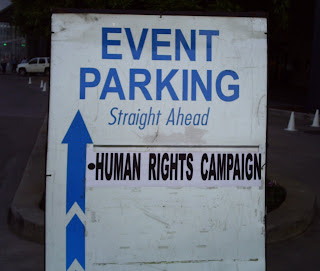 Fun and games in the early part of the protest, just Josephine Tittsworth and I.


Getting stopped by the police. Stevie and I were just walking in front of the hotel out in the street as they instructed (apparently because the sidewalk and curb were somehow hotel property?) Sorry for the poor video quality, but it's a cheapo video camera, and I was trying to maneuver both the camera and my protest sign in a swirling wind.


Phyllis explains what happened with the police instructing us not to walk in front of the hotel. Apparently after our visit inside to pass out stickers (as HRC had previously agreed to), they rescinded it suddenly and decided to play hardball with us using HPD and security to step up their "protection".


More discussion about what took place when Phyllis Frye, Jerry Simoneaux and I made our way inside to attempt to pass out stickers as Phyllis had previously worked out. That was an initial compromise as HRC denied our local trans folks who were friendly to them and on their local steering committee a table to do trans education. So much for making deals or compromises with them. Phyllis was surprised by the reversal. For me, quite the opposite -- I'd have been surprised if they made good on their promise.


As things were winding down, Phyllis gave a briefing to the crowd before collecting everyone to grab a bite to eat.


I stayed behind while everyone went to eat as there was another hour of folks driving in to the banquet. During the winding down period I got a few opportunities for one-on-one explanations with the unaware on what we were doing and what HRC was about (such as this video).
Posted by Vanessa E. Foster at 6:46 PM