Mixed Message: Which Way Does She Go? 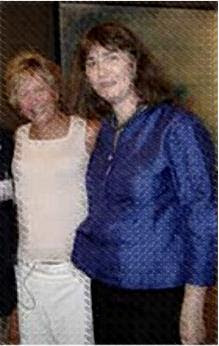 “You can fool all the people all the time if the advertising is right and the budget is big enough.” — Ed Rollins, Pres. Reagan Election Campaign Chief

By now, most everyone in GLBT America is at least cursorily aware of what happened last September: HRC’s Joe Solmonese was keynote speaker at Southern Comfort Conference, was welcomed as the hero he’d been advertised as, and spoke about not leaving transgenders behind in pending legislation – specifically on ENDA – to a standing ovation.

Two weeks hence, Rep. Barney Frank with HRC in tow began the process of divesting their ENDA legislation of anything transgender.

Immediately after, NCTE’s executive director, Mara Keisling, was in a precarious position. She was the poster child of objectifying and dismissing folks like NTAC members who were perpetually at odds with HRC, while moving the community to acceptance and amending our view of the gay and lesbian communities heroes: HRC and Barney Frank. Now with the new “political reality”, Mara needed to scramble to keep folks focused on her and the new message: HRC was now “immoral” and “liars”, etc.

To accomplish getting the message out, she spent no small amount of time (and travel budget!) doing Town Halls, revamping her previous mantra of HRC-equals-hero.

When she passed through Houston, I didn’t bother going. It would’ve only served as distraction for Mara and painted me as target. Of all those who attended and mentioned the visit, all had the same general comment: “mixed signals (or message).” One even mentioned that here in Houston, Phyllis Frye appeared to be biting her lip on some of Mara’s comments. (I did mention that Phyllis always has the tight-lipped expression, to which she added that they were more pursed than they were before).

Not being the nosy type, I just put it aside figuring I’d learn later. Well, I finally heard the specifics from at least the Dallas Town Hall dog-and-pony show. A friend, Kelli Busey, noted to me how the meeting was well-received, and how Mara was letting off steam about HRC and what happened with the betrayal of their previous collaborative efforts. All attending appeared to be in agreement, and the Kelli was glad to know that Mara had finally come around.

… At least until the very end of the speech.

She then reported that Mara lamented that one thing we [NCTE or the trans community?] did wrong was not fully integrating the transgender movement into HRC. Yes, Human Rights Campaign – that, HRC! Kelli told me Mara had her until that point, after which her jaw figuratively hit the floor. She now keeps a wary distance from Mara and actually came down to participate in Houston’s HRC protest.

Perhaps that’s what was said in Houston, Austin and elsewhere – time will tell. If this was her comments to those trans gatherings, like Kelli, I’m flabbergasted by that statement. What benefit is there for the transgender community on the whole by subsuming ourselves and our movement in HRC?

Have we not learned enough by their established behavior patterns over the years? Even Mara should’ve figured this one out by now!

Doing that would officially sanction HRC as our de facto conservators – making official what they already presume and advertise for themselves. They would own our voice, our issues, our stories, and the timing and pace of our rights and agenda. Does anyone actually look forward to HRC allow us our own pulpit from which to educate? Does anyone think they would even consider listening to us as peers, much less equals? Does anyone believe they’ll take our pressing issues with the same weight as their own distinct issues? Does anyone even fathom there might be a possibility for power or even funding revenue sharing on a commensurate basis?

Not only no, but hell to the no!

They hold all cards. They have the money, they have the media, and they have the power (or access to them directly), and we have none of that. There is zero reason for them to compromise with us, and even less desire on their behalf. The only thing we have is that we are in the right, and we hold history – and the ability to keep it from being sanitized the way they hope to after they fulfill their own dreams, take up stakes and move their circus on to whatever is next for the gay and lesbian community.

Additionally, why would we sell our community down the river for the sake of a couple thousand bucks or whatever “largesse” they deign to toss us? Might as well wait for crumbs off of Henry VIII’s banquet table.

What else could there possibly be? Trans people in visible – and meaningful – positions? Dream on. They “included” transgenders some seven plus years ago, and we still apparently don’t have the skills or communication level to be able to lobby on our own issues in their wise estimation. And with all of their professional skills on transgender issues (something we clearly lack in HRC mindsets) we still need to “do more education” on our issues! Think about that.

Other than being there for show, transgenders are not professional, not contemporaries, not leaders and by all of their own accounts (directly or sublimely) not intelligent enough to grasp political reality and the nuances of Washington, the media and public opinion. That message comes through loudly and clearly.

So why would we want to be affiliated with them?

And why would someone in a position of our community’s leadership make such a statement? What could any of us in trans America possibly gain by such an absorption by HRC? I’ve got to wonder whose side Mara’s on, and what would possess anyone to think there’s anything but a net negative for trans people in such a combo?

Pardon me, but I’m sticking with what I’ve learned from dealing with them the past twelve years. No more blind leaps of faith into that abyss!

“You can climb a mountain.
You can swim the sea.
You can jump into the fire,
But you'll never be free.” — Jump Into The Fire, Nilsson
Posted by Vanessa E. Foster at 11:53 AM

SCC 2007 was probably meant to be the culmination of the NCTE/HRC merger, with it HRC's control over the politics of the T community by proxy, and probably came close to being exactly that.

If such a marriage occurred there, the divorce happened 2 weeks later on YouTube after Solmonese's speech was shown to be a pack of lies - and we NTAC'ers knew it was probably a lie already. Had ENDA passed inclusively, it would have been hard to say an evil word about Solmonese and Co, and hard to prevent anschluss from happening. Is it Mara's real ambition to be the next exdir of HRC? Only she can speak to that, but I'm distrustful of anyone who attaches personal ambitions to activism.

Clearly, this community continues to need the independent voice that NTAC can represent, and any other independent voices that wish to speak up. Remember HRC's remark in 2001 to Angela Brightfeather that "we cannot deal with more than one T group". HRC will need to learn that they aren't going to get their wish, not in this lifetime. They cannot dictate to us and have us follow. I still believe that Mara remains their tool.

Clearly, NTAC still has a reason to exist. Mara cannot be trusted to be the only voice this community has.
Plain and simple. A single voice can be subverted and corrupted. If you need an example from history as to why a single-voice speaking for the community is not acceptable, I refer you to the story of Vidkun
Quisling.

I posted this about Mara's visit. I stand fully behind my words. If these words cause you distress may the offended be fully offended!

I place morals and integrity above personal and professional ambitions. I am a poor woman in uncle Sam's paper and wealthy beyond belief in friendship.

"FOR THOSE OF YOU WHO ARE ABOUT TO ROCK(TRANSITION), WE SALUTE YOU!!!"

She was funny, endearing and spoke
with a sense of authority and self professed moral righteousness.
And she is wrong.

Mara keisling believes if someone professes to be an advocate of LGBT issues they must be willing to confer and work with groups that are diametrically opposed to those of us who beleave in honesty and integrity.

We are not talking about minor agenda differences.
We are talking about the fundamental belief that right is right and wrong is wrong.
This concept is valued by all people.

Mara Keisling said she was here because the people inside the beltway could no longer ignore the ground swell of grass root groups or as it seems to become known as the "fund a mental" groups.

A member of hrc in attendance asked what could be done to save hrc now that it's leadership has lost creditability? The answer someone shouted out is self evident.

We cannot afford to listen to those who would have us bury our heads in the sand while the very demo-crates and advocates we elected take turns swinging bats at our asses.

An accounting must be made by hrc. Changes must be made in the leadership so a new clear, inclusive and TRANSPARENT agenda may be presented.
Only then will people be willing to forgive and "move forward".

While I disagree with Mara's conception of moving forward I admire her courage and dedication to the tasks at hand.

Hello. This post is likeable, and your blog is very interesting, congratulations :-). I will add in my blogroll =). If possible gives a last there on my blog, it is about the TV de LCD, I hope you enjoy. The address is http://tv-lcd.blogspot.com. A hug.