Reflections On A Historic Campaign

"Tonight is a night for all the activists." — Rick Hurt (aka: Rainbo De Klown)

In many ways, this election cycle for Annise Parker's latest candidacy has been very familiar. It's also been very different as well.

Just as the last two times Annise has run for her first shot at a new office, I've been long-term unemployed, there's been family strife and stress to deal with on the side, severe depression set in and there was a sore need of finding a diversion to keep me focused and not obsessing on my own hell. It even rained on me again and soaked me to the bone on election night eve. It's certainly coincidental, but not something I'd ever want to plan (especially getting rained on in December).

Cold dark weather, holidays, the isolation and feeling out of synch with the rest of the world on this whole "seasonal happiness" also add to the malaise. It's not something I'd recommend to anyone, but it does seem oddly comforting in that it produces political wins, strange as that sounds.

And after it got dark and the blockwalking we were doing became impossible, I spent the last hour plus where I was first assigned to work the polls: John Reagan High School in the Heights.

Unlike 1997, I didn't have a dozen friends and relatives die in a six month span during election season this time (too intense). The election also worked much smoother with a larger influx of volunteers and actual paid staff. Election eve was so smooth that I felt guilty leaving to drop off signs at polling places before 10pm! And of course the election, though pulling close near the end, wasn't as stressful as the first one which seemed as if everything was riding on it. 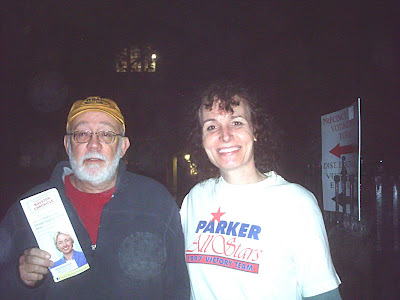 Even my time at Reagan was low impact as they closed off the other three gates and had all voters, and all card pushers, at the one main gate into the school gym. (Back when we had all four gates open, that location required lots of energy to run back and forth across the schoolyard to catch voters trying to avoid the main gate.) It actually removed the challenge of that location. Obviously I burned off zero calories working Reagan this time, but then I'm getting older too....

What little resources we had in the old days and how stressed we were at getting everything organized correctly was now a well-oiled machine moving like clockwork. There were multiple coordinators with various pieces of the tasks instead of one volunteer coordinator and one field general. It was amazing how simple it looked this time. I was a bit envious.

Financing was a big difference this time as well, which accounted for that easier process. At the post-election celebration, about a dozen folks walked around with the Gay & Lesbian Victory Fund pins and even Chuck Wolfe, their executive director, was onstage with Annise during her victory acceptance.

However, it also seemed like homecoming week being back at the campaign. So many of the old volunteer stalwarts I used to pester on the telephone to come in and help back in the days were back again, 12 years later. It was great seeing Peggy Smith again, and blockwalking with Annise's best friend, Cicely Wynne, on major thoroughfares in Meyerland during rush hours.

It was great seeing the '97 TV ad guru Cindy Rindy (her official name now that she's married, although she goes by her maiden name Miller to avoid being called Cindy Rindy.) We chatted, laughed and reminisced about raising baby squirrels during the '97 campaign. 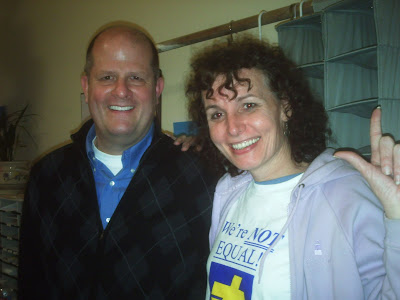 At the victory party, even more of the familiar faces from '97 that I hadn't seen for so long: former Parker staffers Kathy Elek and Terence O'Neil, former city council candidate Mary Ann Young, former Women's Caucus member and judicial candidate Mary Kay Green, and one of the other former Team Parker members, Patrick McIlvain. I even got a quick wave with Cong. Sheila Jackson Lee who was holding court with a throng of animated supporters as I was leaving.

Things like this are the blessed diversions that help prop the spirit up during dark times.

Obviously media was everywhere. This was a history-setting day for lesbians and gays across the nation. Peggy Smith and I even showed up on a live CNN feed (unbeknownst to us) at the victory party. Thank goodness I brought my signs along from the polling place as eye-catching props.

Besides Victory Fund, it seemed a number of folks were in from out of town to catch a ride on the Parker phenomenon. You see the best and sometimes (especially at the victory) the most unctuous aspects of politics in full display. One of the men I blockwalked with (an older gay gentleman) showed up to volunteer right before dark on election night for his first time. He asked me if I'd ever met Annise (and I gave him my history going back 12 years). Then he had the audacity to ask me "does she remember you and did she do anything for you after election?" along with other questions of how one gets an insider track with someone like Annise.

In response I gave him a flip answer: "she gave me one of her cats" (true). Not knowing if he had contributed or not, I held my tongue; but I felt like telling him this isn't a quid pro quo game that johnny-come-latelys can buy into on the cheap. Other than asking for trans inclusion on the city employees' non discrimination, I'd never asked for anything personally ... and I guess you could say I got what I asked for.

It just drove home the reminder that political stardom is like a lit spotlight to moths at night. Opportunists abound.

Catching up with some of my old-time friends at the party, one noted there were a lot more gays and lesbians in attendance at the runoff victory party than attended the general election party. Admittedly, I didn't attend the general party either. 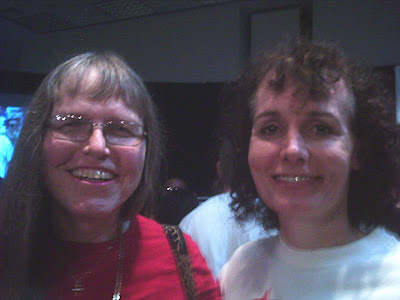 Another noted that during Gene Locke's concession speech, the "diversity" onstage with him looked anything but. It was a pretty homogenous group. But for the fact that they were virtually all African-American instead of virtually all white, it could have been a Republican victory party. Indeed, Annise's had a very nice pastiche of all cross-sections, obviously heavier on gay/lesbian but still a very sizable contingent of straight as well as seemingly every ethnicity.

An old friend from the Houston Gay/Lesbian Political Caucus days, Rick Hurt (aka: Rainbo De Klown) and a couple others commented that he was surprised the party was held in a small room of the George R. Brown, instead of one of the larger rooms. It just made it intimate and more crowded looking. He also kept repeating that "this is a night for the activists."

Maybe it was a night for activists. Annise started off as an activist. Many of the longtime Team Parker folks have been perennial activists. And it also allowed this activist a night of basking in the warmth of victory's afterglow, watching the ebullience on Annise and her family's faces as they stood onstage, seeing the pride and excitement (and maybe even a bit of inspiration) in the faces of every lesbian and gay person in the room that night. It's fun getting to see people finally achieving their dream. It's also a nice little vicarious thrill, even if for a moment.

After the victory speech, Rainbo and I went to the Montrose to check out the victory street party. It wasn't. The street was blocked off, but there was no one out there as it was chilly and damp. They were all in the bars — essentially a typical bar night. Nothing there for me.

Other thoughts that hit me during and after the victory was how many people were congratulating me; not just trans, but gay and lesbian – even Grant Martin – as well. Surely I was quick to return it to Grant, as it is directly his and Annise's leadership to this victory. But to the Trans Community I'll remind how infuriated we've been throughout the years when gay and lesbian groups like HRC, GLAAD, NGLTF, et. al. co-opt or capitalize on our issues and efforts. We should not be doing the same in reverse, regardless of whether they do it. Take the moral high ground.

This is rightly the gay and lesbian community's victory and not a time for Trans people to be in the spotlight taking bows or grandstanding. Our efforts were a part of what helped them achieve their goal.

Which brings up the issue of the next bit of history to work on: Trans people in office. It's easy for us to make a decision to run, but putting this desire to reality by being elected is another thing altogether.

In her speech to the Gay & Lesbian Victory Fund, Annise noted that she got elected "with gay money, transgender volunteers and black voters." We should work on attracting the black or straight voters. But with Trans money?!? And then who would we attract as volunteers – intersex? And Trans people still have the image problem (even within some segments of the lesbian and gay community, much less straight) and zero media presence to combat this. Even T employment in politics is rare, so how easy would it be for us to be elected? This is a discussion we in the Trans community need to have: how do we make what is a virtual impossibility a reality?

Nevertheless I'm very pleased for Houston's gay and lesbian community and especially for Annise and Kathy. Of course Annise has her work cut out for her in the years to come. We've got budget constraints, sales tax revenue that's dropping like a rock, home values that are stagnant at best with the foreclosures popping up and a lot of people dealing with major hardships.

As a Club For Growth lobbyist mentioned to me, Houston's attracted all these Fortune 500 corporations because it's a place they can locate, pay their people low wages and yet their employees can still have a good quality of life due to low costs on most everything (except utilities). While that's true, even Houston's companies have been shipping our "low waged" jobs to even lower waged countries across the globe, like all other locales in the country. Unlike these other cities, though, Houston's wage-earners are much more vulnerable inasmuch as the low wage base means there's typically little to nothing saved up in order to weather the hard times. And Texas is renown for ensuring there are virtually no safety nets at all.

None of this bodes well. And Annise's victory speech acknowledged that there's many Houstonians in rather dire economic straits. She'll have her work cut out for her. But as she also mentioned in her speech, she intends to be there for all Houstonians. This writer sure prays it's so. It can't come too quickly!