"Tonight ... the voters of Houston have opened the door to history." — Mayor-Elect Annise Parker at her acceptance speech on election night. 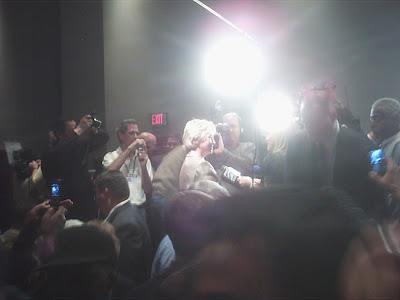 And so it is done.

History was set on December 12, 2009 with the election of Annise Parker as our next Mayor. Not only is this a red-letter day in lesbian and gay history for Houston or Texas, but indeed this is a truly momentous victory for America's lesbian and gay community.

The gay and lesbian community worked feverishly to get her elected. Campaign Consultant and Manager Grant Martin (who joined Team Parker the year I did in 1997) conceived the gameplan way back then, stuck to it and ensured it was implemented and masterfully executed this year.

And of course Annise herself did everything she needed to do to deftly show what was once a skeptical Houston that a lesbian (or even a gay man) could indeed be just as skilled as any other political candidate or elected official.

It wasn't some "knee-jerk" decision of "liberal guilt" that got the first out gay or lesbian elected to the top spot in a top-ten American city. This was here in Houston: home to the Bush family, where Dick Cheney ruled the roost at the corporate headquarters here for Halliburton/KBR, the region where Kay Bailey Hutchison grew up and where Tom DeLay hammered his way through Congress and even trained his own acolyte, John Culberson. This was done in a two-fisted, blue collar, refinery-laden monster city renown for having the largest rodeo in the U.S.

Annise Parker was elected by showing Houston that she was just as human as anybody else, just as committed and caring as anybody else and just as competent as anybody else ... and maybe just a little bit more so. She also demonstrated to Houston and to Texas that "gay" or "lesbian" does not have to automatically be threatening or feared. She came across as just a regular everyday professional woman from Houston.

Make no mistake, Annise certainly has the skillset to do the job after six years as City Controller and six on city council. But it also shouldn't be discounted that Annise humanized herself and the image of gays and lesbians throughout the city. Even in red-meat, fire-breathing, rednecked Republican Texas, being "gay" is no longer an automatic death-knell for any job or any career.

In an interview with Open Left during the run for this year's mayoral campaign, Annise noted: "in that campaign 12 years ago, I was told by members of the GLBT community, "well, if you have open transgender people as campaign volunteers or if you have identifiable openly gay people out pushing cards for you or representing you at public events, you'll never get elected." My response was, "well, then what would be the point?" and I immediately went out and my volunteer coordinator was transgender, my office manager was a flamboyantly gay man."

Even in the latter stages of the campaign, when her runoff opponent Gene Locke recognized he was losing the election and resorted to desperation passes in attempt to win, Annise stuck with Grant's gameplan: avoid the mudslinging, avoid compromising principle and hammer the opposition on the issues.

Watching Annise onstage with her partner Kathy Hubbard and her adopted children, it was a watershed moment. It seemed both surreal and appropriate that this was happening here in Houston. Kathy was literally beatific. Annise was dignified, but you could see the pride beaming through.

Even though I've met and visited with both of the last two mayors of Houston, it's also nice to finally have a Mayor who instantly knows me on a first-name basis! That's something Trans people don't get very often down here in the Bible belt ....

And before I forget — a heartfelt congratulations to the Lesbian and Gay community here and throughout the U.S. As Annise mentioned in her victory speech (and a sentiment I also agree on): "I know what this win means to many of us who never thought we could achieve high office."

For the Lesbian community, and I'm sure for the Gay community as well, that glass ceiling has now officially been shattered. Savor this historic occasion and enjoy!

"We have a responsibility to live as openly as we can and to bring our full selves to everything we do, and begin to change hearts and minds." — Houston City Controller Annise Parker in an interview for Open Left Blog.
Posted by Vanessa E. Foster at 10:02 PM