Hate Crimes: A Long Time Coming And A Long Struggle Ahead

[Note: this is a reprint from a requested project at Pam's House Blend]

"It's been a long time comin'
It's goin' to be a long time gone." — Long Time Gone, Crosby Stills Nash & Young 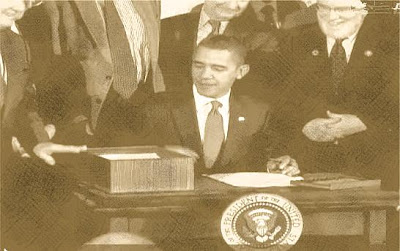 It’s been a long time coming. The historic passage of hate crimes legislation and signature into law by the President signals the very first federal law covering trans people in America. My emotions, though, are mixed: ebullience, wistfulness, solemnity, sadness

To have this finally pass, and to have it inclusive of trans people, is a major victory. Since 1997, I’ve been consistently taking time, shelling out money and visiting offices all over Washington DC and Austin – and even once in Annapolis this year – in attempt to get even this, the most elemental protection, passed with coverage for us all. With this official passage last week, all the memories of where we’ve all collectively been working to achieve what’s finally reality – seemingly against all odds – come streaming in.

In 1999 I had the opportunity to pull in the most critical component of what would eventually be the key to eventual passage of the James Byrd Hate Crimes Bill in Texas two years later. Taking two of my gay friends on their very first lobbying visit to show them how to parry and effectively argue our case, we landed the support of Rep. Warren Chisum, long-known as an arch-conservative, lightning rod author for the most heinous anti-GLBT legislation. His support brought in other crucial moderate GOP co-sponsors and votes and also provided cover for blue dog Dems as well. Our only responsibility was to change the wording to “sexual preference” and “gender non-conformity.”

It was a victory I was pleased to help along, but a hollow one personally. In 2001, gender non-conformity was refused inclusion in the bill (with a promise made to me that if we didn’t fight this and let this pass, they’d “come back for us” the next session). The bill passed, I held my tongue, but they never “came back” for us. Even this year, while in Austin, I visited with Rep. Chisum again a couple times. He chastised me with reminder that he didn’t want to revisit this bill again. However, he was ready once again to support. I’ll always remember the bravery of those like Rep. Garnet Coleman, author of 2009’s expansion bill in Texas, and the initial co-sponsors like Rep. Rafael Anchia and Rep. Alma Allen, as well as conservative Rep. Chisum and at least one other longtime Republican friend who were ready to bravely support and push this. The bill died in committee after testimony, but these unsung heroes deserve mention.

Memories of victims past stream back. Meeting one of our homeless trans girls in Houston mere months before she was shot and killed in the Montrose sticks in my mind: would this law have helped solve her murder and bring some solace? Seeing the abject, stoic sadness in the faces of the family of Terrianne Summers as I attempted to hold my own emotions in check while eulogizing my activist protégée, knowing her murder is also still unsolved with no justice.

Even in the cases where the murderers were caught, there’s only a little solace for the victims’ families past. Random memories. Watching the silent tears stream down the solemn face of Paula Mitchell at the Cortez, Colorado vigil in 2001 for her murdered child F.C. Listening to the sobs of Sylvia Guerrero over the phone in 2002, recalling her precious Gwen and how callously her body was dumped and buried, not long after Fred Phelps had found out Sylvia’s address and viciously protested in front of her home. Sitting alongside Queen Washington as she recounted for a reporter covering NTAC’s 2004 Lobby Day how her baby, Stephanie Thomas, was riddled with bullets a mere block from her home. Hearing the broken-hearted story from Sakia Gunn’s mother about the shoddy treatment from Newark authorities and community leaders and later seeing it first-hand in 2004 when our march from West Orange into Newark had only six white faces – four NTAC members and two local PFLAG parents – and was briefly refused entry into the city by police even after organizers had received permits. Hugging an activist friend, Ethan St. Pierre, who was shaken and teary-eyed after having making his very first speech in Boston recounting his aunt, trans woman Deborah Forte, being brutally murdered and having to go to the morgue to identify her body. There’s no way to adequately relate experiencing this.

I still recall vividly the long battles and the acrimony over the years of merely having trans people covered by hate crimes. Struggling with conservatives just as we did with the Human Rights Campaign or the Anti-Defamation League for protection. Vehemently arguing with Mara Keisling and Lisa Mottet at the 2003 IFGE convention as they agreed with HRC and ACLU lawyers, and tried to convince me, that “gender” would include “gender identity” due to congressional intent. Less than six month later, finding out first-hand from our own local District Attorney’s office that they didn’t “give a damn about,” nor had the time nor budget to research what congressional intent was as they were following the letter of the law as written in Texas, and nothing beyond.

Even something as indirect as political campaigning paid off. Being an Obama delegate won me few friends in the GLBT community during the primaries. From my lobbying experience though, I knew Hillary Clinton’s fondness for incrementalism and lack of knowledge on trans people just as well as I knew Obama’s full-scope approach to rights. Trans folks, including myself, fought hard during the campaign up to the national convention and all the way up until election day. That night, 1000 miles from home in battleground Dayton, Ohio, I knew we’d finally won our rights to be included when Ohio was called for Obama and later when it became official that President Barack Obama would soon occupy the White House.

We were branded as pariahs, had our characters impugned and reputations ruined for standing firm on trans inclusion. It was worth it. We now have what we set out to achieve: coverage, rights, recognition. Finally, federally, we’re now human.

The Hate Crimes Bill is a watershed symbolic victory for Trans Americans. But beyond the symbolism, we remain vigilant. It’s an important first-step, but not the final goal.

"You've got to speak out against the madness,
You've got to speak your mind, if you dare.
But don't – no don't now try to get yourself elected...." — Long Time Gone, Crosby Stills Nash & Young
Posted by Vanessa E. Foster at 11:55 PM